Spencer Wells, in his short, accessible book designed to accompany a similarly titled documentary film, describes the deep history of humans as it has been inscribed in Y chromosomes. This history has only recently become decipherable through modern genetic tools, and the results have settled some centuries-old controversies about how humans in different parts of the world have become so diverse. The biggest surprise is that our differences are recent: the dramatic differences that distinguish Kenyans, Swedes, Han Chinese, and Polynesians all arose less than 50,000 years ago.

Genetics and geography have pulled back the curtain on our past to a degree that was unimaginable before modern genetics. How does it work - how do we trace human history by looking at Y chromosomes? (It can also be done using mitochondrial DNA passed along maternal lineages, but Wells' book mainly covers the Y chromosome story.) You need two critical elements: the ability to look at genetic "markers", and the ability to sample people from populations that have remained in a single geographic area for a long, long time. Let's say you collect Y chromosome DNA from men around the world, and you get the following results: 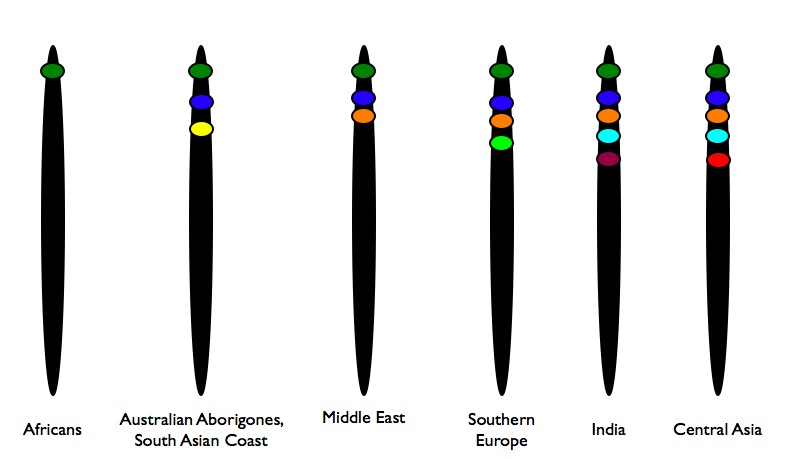 This crude cartoon represents Y chromosomes sampled from men living in different areas of the world, and imagine you are sitting in your lab trying to make sense of these results. Each colored mark stands for a genetic marker - a specific change in the Y-chromosome DNA. (Each one will have many other changes, but we're just focused on a few markers in this study.) We assume that each change represents just one single event - for example, there was one 'green' mutation that happened in one man who is the Y chromosome ancestor of all living humans.

Now, it is formally possible that the green change happened more than once in unrelated individuals: the green mutation in the African sample could have arisen in one ancestral individual, while the green mutation in the Australian sample could have been due to a completely independent mutational event (but with the resulting DNA change being exactly the same in both cases). Yes, this is possible, but given the number of possible ways DNA can change, very, very unlikely. The best explanation for the green mutation is that it came from a mutational event in one single individual, who then passed that mutation on to his descendants, which now includes everyone alive with a Y chromosome.

So, making this assumption that each genetic marker we're looking at arose only once in a single ancestor of everyone who has that marker, we can put together a genealogical scenario that goes as follows (the dates are obtained from methods described in Wells' book):

1. An 'African Adam', living about 90,000 years ago, long before any modern humans had spread beyond Africa, was born with the 'green' mutation in his Y chromosome. Over time (through the process of genetic drift), he became the 'Y chromosome ancestor' of every human Y chromosome on the planet - each Y-chromosome around today descended from that African Adam's original Y chromosome.

3. Today's Australian Aborigines all have the 'yellow' mutation, which marks the branch of Y chromosome genealogy that moved along the Southern Asian coast and into Australia 60,000 years ago. We only find this yellow mutation in Y chromosomes of people living along that coast and in Australia.

We can keep drawing out scenario after scenario, but what it adds up to is a pattern of genealogical relationships that can be represented like this: 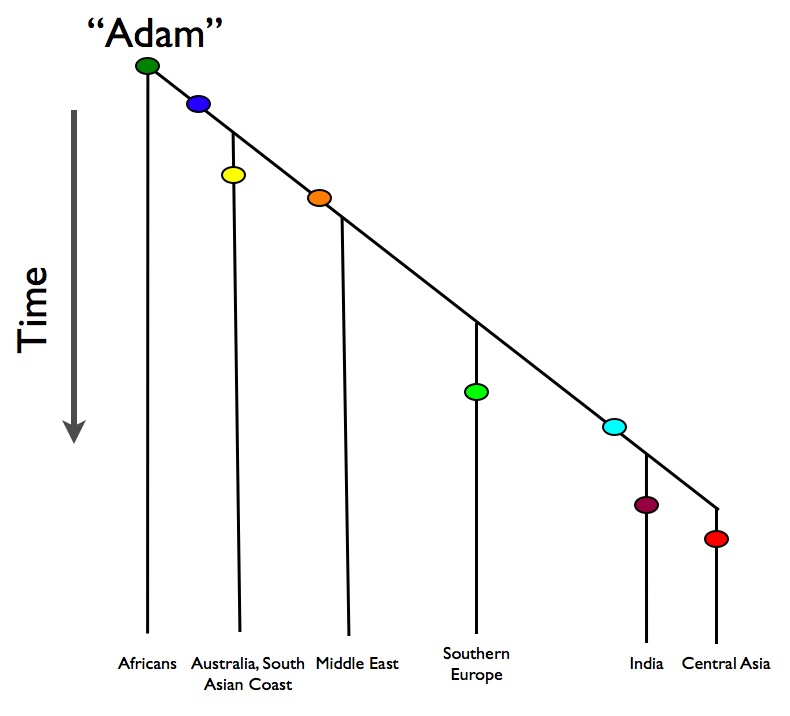 I've oversimplified the geography and the genetics, but this example gets at the core logic of how we can use genetics and geography to trace human history. To get this to work, you have to be able to find individuals from a particular geographical area who have descended from ancestors who have lived in that area for a very long time. For example, we can find the yellow mutation in some individuals along the South Asian coast because those individuals descend from ancient migrants who settled that area 60,000 years ago. The fact that Australians and these particular South Asians share the yellow mutation suggests that Australians descend from humans who gradually colonized the South Asian coast before moving into Australia. If instead Australian Aborigines descended from migrants from Central Asia, then we would expect Australians to have the orange, turquoise and red mutations, not the yellow one.

Wells details how geneticists have used this technique over and over to understand how humans colonized the world. Genetics has been able to resolve questions that anthropological artifacts alone could not. And often the genetic data have suggested a scenario that has subsequently been confirmed by archaeological finds. The result is a surprisingly detailed history of our species.

One argument that genetics has settled definitively is the 'Out of Africa' controversy. Did modern humans evolve from archaic human in Africa, and then spread out to the rest of the world? Or did modern humans evolve independently in different regions of the world? The second scenario would suggest very deep racial divisions between human populations; in essence, all humans would have shared a common ancestor nearly one million years ago.

But the genetics rules out the independent evolution scenario beyond any reasonable doubt. Modern humans evolved in Africa, and then left Africa less than 70,000 years ago. All of the physical and cultural diversity we see among humans today is the result of developments of the last 30,000-80,000 years, and not the result of nearly a million years of evolution. As Wells puts it (p. 191-192):

For the most part, physical traits that distinguish modern human geographic groups only appear in the fossil record within the past 30,000 years. Most older fossil Africans, Asians, and Europeans are very similar to each other. While we know nothing about our ancestors' skin colour, hair type or other surface features, the evidence form bones suggests that our concept of race is actually a very recent phenomenon. It was probably the fragmentation of human groups as a result of the last ice age that produced the distinct 'racial' morphologies we see in modern human - not hundreds of thousands of years of separate evolution, as Carelton Coon and others had argued....

The other reason for the genetic uniformity among human populations is that humans are mobile, and groups have intermixed throughout their history. When this happens, their patterns of genetic variation become dispersed throughout the mixed population. So, even in cases where the genetic markers arose after modern humans migrated out of Africa - like most markers we have followed on the Y-chromosomes - they will still be widely distributed as a result of subsequent mixing.

Globalizing technological change has accelerated this mixing. This has produced positive change many ways - many people have more choice in where to live and who to marry than would have been possible 1,000 years ago. But it also means that the genetic and geographical information needed to reconstruct deep human history is quickly disappearing. As Wells points out, we have only a short period of time to apply these new scientific tools before the past becomes irretrievable.

Have you read this book? Let's hear your thoughts!

Join me for the next Sundaty Science Book Club on January 18. I'll delving into the craziness of quantum mechanics with Louisa Guilder's The Age of Entanglement. We'll continue with quantum mechanics the month after that on February 15th, with George Johnson's biography of Murray Gell-Man, Strange Beuaty.