Michael White
Evolution carries out an incredibly tricky balancing act: the genetic program of a species has to be resistant to small changes, yet also susceptible to the adaptive remodeling of natural selection. The human genome is so robust that over 6 billion variations give rise to viable organisms that have successfully traversed the complex developmental program that produces a live human infant from a single cell. Yet the human genome is the product of major evolutionary innovation, even over the relatively short period since the human and chimp lineages diverged. How can genomes be robust and malleable at the same time? A team of researchers led by Andreas Wagner have recently published an interesting theoretical study of this question. This subject can get abstract and tough to follow if you haven’t mastered a lot of technical jargon. However these results are worth the effort to follow the argument, and below I try to explain this study in a relatively jargon-free way. So how does evolution maintain both stability and the potential for innovation? It’s much easier to study this question by focusing on a small model system, such as a transcription factor regulatory network. A transcription factor regulatory network is essentially a set of genes that switch each other on of off (via, of course, the proteins that are encoded by these genes). These networks are the subject of Wagner’s research. 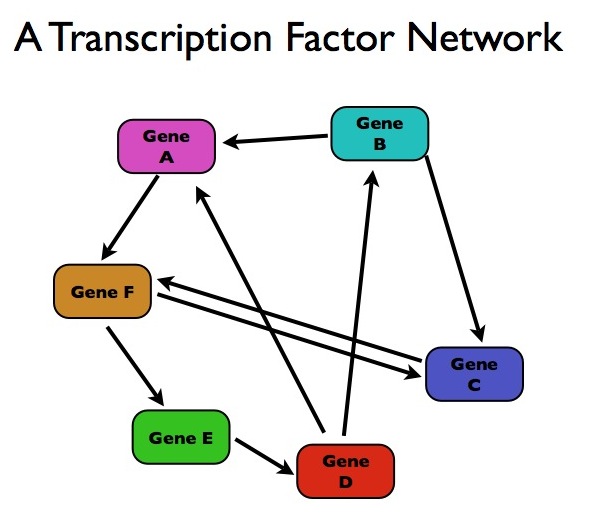 Over time, a stable pattern can emerge in a transcriptional regulatory network, with some genes on and others off. This phenomenon, the emergence of a stable pattern of gene expression, is roughly what happens when a stem cell differentiates into another type, such as a nerve or muscle cell - a certain combination of genes are switched on or off to produce a stable pattern that represents the final state in the fully differentiated cell. 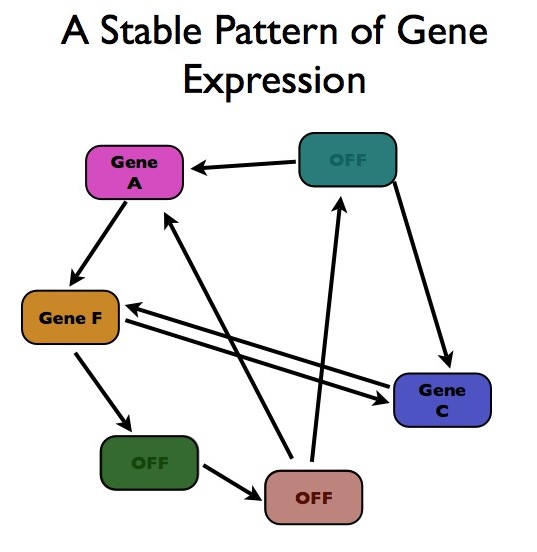 A critical point to understand is that different versions of the transcriptional regulatory network can produce the same final, stable pattern of gene expression. In other words, we can rewire some of the connections in our network, but still get the same final pattern of genes switched on or off. 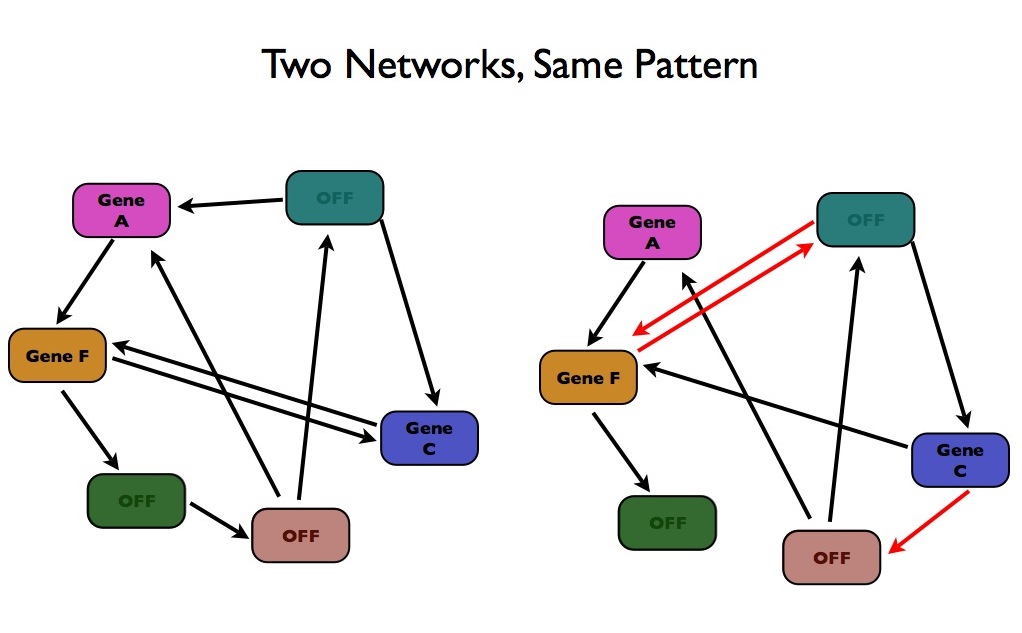 This is one way that evolution produces networks that are stable to change - small variations don’t radically alter the end result of the transcription factor network. Andreas Wagner and his colleagues used simulations to test just how much rewiring can happen in a network that still produces the same final gene expression pattern. The answer is that you can in fact do a lot of rewiring and still have your network carry out its proper function. Naturally some rewiring is going to produce catastrophic change, but the point is that evolution has many different ways to produce the same final pattern of gene expression. Once nature has hit on a great way to make a stem cell differentiate into a nerve cell, it’s not that difficult to keep making nerve cells, even in the face of significant evolutionary change. Thus this group of researchers has used simulations to come up with a theoretical understanding of how the complex systems in a lineage of organisms remain stable over long periods of evolutionary change. But if these systems are so stable, how does evolution ever produce something new? If it is so stable, how can a transcriptional network which produces a stable pattern of gene expression in a nerve cell ever be rewired to produce an expression pattern for a new cell type? The answer to this question is paradoxically tied to the very features that make transcriptional networks so stable. Wagner and his colleagues found in their simulations that networks which are structured in very similar ways (and thus producing essentially identical patterns of stable gene expression) can be mutated to produce only a few limited, new patterns of gene expression. But we learned just a moment ago that transcriptional networks can be structured in very different ways yet still produce the same final effects; these different networks can evolve in different ways and thus increase the potential for evolutionary innovation. An example can make this idea clear. Let’s say we a dozen different but closely related species; each of these species produces its nerve cells using very similar transcriptional regulatory networks. The networks can only be changed in certain, limited ways, thus the potential for evolutionary innovation is limited. But now let’s say we have a hundred different (more distantly related) species, and they all produce nerve cells (with similar stable patterns of gene expression), but they do so using a wide variety of transcriptional network structures. The pool for evolutionary innovation is now much larger, meaning that it’s much more likely that a new and useful cell variant will evolve. If all of these hundred species had to produce their nerve cells in exactly the same way, using very similarly structured transcriptional networks, this potential for evolutionary innovation would not be possible. Thus Wagner’s group demonstrated how it’s possible for regulatory networks to be both stable, and yet malleable at the same time.
Adaptive Complexity
More Articles All Articles
About