Food waste is a big problem, particularly in the developing world, but also in the rich world.   I have seen quite a bit written recently about how one of the best ways to improve the sustainability and lower the footprint of food production would be to reduce waste.  While this is absolutely true, the perspective that has been missing is that we have been working on this issue for a very long time and have made significant advances over the last several decades.

That does not mean there isn't plenty of room for additional progress, but that is harder than many might imagine.  I think that by considering what has already been done, we can get a perspective on the remaining challenges.  I'd like to focus on fruit and vegetables and to talk about just 10 of the many ways that industry routinely reduces food waste.  I already posted methods 1-5 and this is the second half.

Most of us have experienced having a bag of potatoes begin to sprout.  If you catch this early you can still use the potatoes, but fairly soon these potatoes become unusable.  Globally, potatoes are stored on a huge basis.

Whether it is for supplying the fresh market or for making efficient use of processing facilities for fries or chips, it is necessary to store potatoes for many months.

If the potatoes are stored cold enough so that they don't sprout for a long time, they accumulate "reducing sugars" and brown excessively when cooked due to the Malliard Reaction. So, at a key point in storage, potatoes are exposed to certain volatile chemicals which keep them from sprouting.  There is continuing innovation in this area and recently some new options have been developed which have some advantages.  In any case, without these tools there would be a great deal more wasted potatoes. 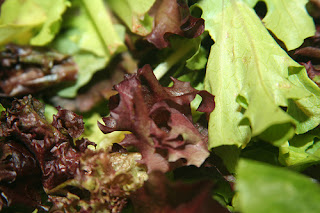 "Bagged Salads" are, at least for old-timers like me, a relatively new innovation in the produce industry.  They have revolutionized salads both for home and at most restaurants.  In the old days, salad was made with "iceberg lettuce," one of the only forms of that vegetable that could handle shipping.

Some innovative post-harvest scientists in the 1990s came up with plastic bag materials which have selective gas exchange properties and effectively create a "modified atmosphere" in the bag that allows something as labile as "spring mix" to be shipped as a ready-to-use salad product.  The main barrier these companies had to overcome was getting retailers to display them in a refrigerated display.  Once they did that, our salad consumption radically changed to a much more interesting and health-enhancing option, which also happens to fit our convenience-driven lifestyles.  There are many other examples where consumer level packaging is used to reduce food waste by actively modifying the atmosphere in the bag.

Plants make a volatile hormone that is the simple, small molecule, ethylene.  It is involved in various processes like stress response, but for many fruits and vegetables it is a key factor in ripening.  Species whose ripening is very much effected by ethylene are called, "climacteric."  For many species, we manage the influence of this hormone to reduce food waste.  Bananas and tomatoes are classic, climacteric crops.  Long ago we learned that if you harvest these crops at a certain early stage of maturity, you can ship them a long ways, and then induce the ripening process by putting them in a room with ethylene.

The entire ocean shipped commercial banana industry and most of the Florida tomato industry is based on this process.  For many crops that are picked at riper stages, it is better for food waste reduction if they don't "see" more ethylene en-route to the store/consumer.  There are a variety of technologies for taking the ethylene out of storage rooms, shipping containers, or even cases of the product.

There is another particularly cool technology for managing ethylene "perception" by crops.  Fruits and vegetables receive the hormonal signal of ethylene through specific receptor proteins that bind ethylene and trigger a cascade of gene expression.  The receptors then release the ethylene and wait for more signal.  Researchers at North Carolina State University in 1997 discovered some other small, volatile compounds, which are bound by those same receptors, but in an irreversible fashion.  When extremely tiny amounts of this non-toxic gas are introduced, the fruit/vegetable stops "seeing" ethylene.

One of these has been commercialized and has greatly improved the quality of apples in storage, keeping them crisper and more fresh tasting. 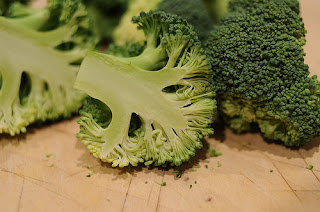 Sometimes it makes sense to change the way that things like vegetables are shipped versus what was traditional.  The best example is broccoli.

For a long time it was sold by the bunch with a substantial amount of stem.  Few consumers used the stem. Then the industry started offering "broccoli crowns," which were just the flower that most people actually eat.

Now one typically sees "broccoli florets" which are already pre-chopped for steaming or stir-frying.  In both cases, the stem section is not discarded; it is chopped and put into "slaw" (broccoli is the same species as cabbage so it works well for that).  So not only is the stem saved from going into the landfill via consumers, there are fewer pounds shipped, and more of the product used as food.  There are many other examples like this. 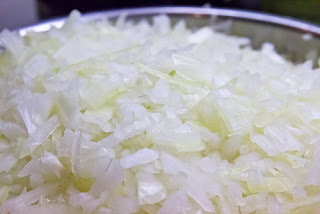 A rapidly growing part of the produce industry meets a combination of demand for convenience and the goal of reduced food waste.  Most consumers don't know it, but most restaurants and many food manufacturers don't cut up their own produce in kitchens or processing lines.

Much of this work is now done near the source.  One great example is from the largest processor of onions in California - Gills Onions.  They provide huge amounts of sliced and diced onions to restaurants and food companies.  They generate a huge amount of onion skins, as well as any onions that are not usable.

As you can imagine, that can be a rather large and stinky waste issue.  Gills installed an anaerobic digester that turns much of that waste into methane, which they then burn, as a renewable, carbon-neutral energy source to power their processing facility.  The restaurants etc. would probably not made such good use of the waste.

On the consumer side, the carrot industry was transformed when the idea of carrot sticks was introduced.  First of all, the carrot producers were able to use tons of carrots that did not pass purely cosmetic standards for sale because even a crooked carrot could be turned into several usable sticks.  Also, they were able to use the remainder of the carrot for various products like slaws, juice or for animal feed.  When we all used to peel carrots at home, lots of that ended up in non-optimal scenarios, like the landfill.

Also, once again, this and other "fresh cut" options have served to help over-busy consumers to eat more produce.  Another great example is apple slices.  These can be generated from small apples that would not fit industry/retailer standards and which might go to low value and somewhat reduced nutritional options like sauce or juice.

I've really only scratched the surface of the food waste reduction innovations that have been put in place.  Again, there is room for improvement, but much of what is left to do is really in the hands of retailers and consumers.