Life expectancy at birth is about six years shorter for White males than White females. This gap is about eight years for Blacks. Given the close correlation between declining health and early death, older males are effectively on average several years more aged than females. The detailed shapes of statistics could conceivably not support such ‘hyper-aging’, or it could conceivably result in only a few months of hyper-aging. The ‘Hyperaged Men Description’ is however strongly confirmed by the shape of for example Europe’s population pyramid. There is no far earlier onset of males dying, or any features that could point toward more exotic, perhaps purely biological explanations. Instead, once the almost linear final die-off starts at around 45 to 55 years, males simply succumb like females that are five to six years older: 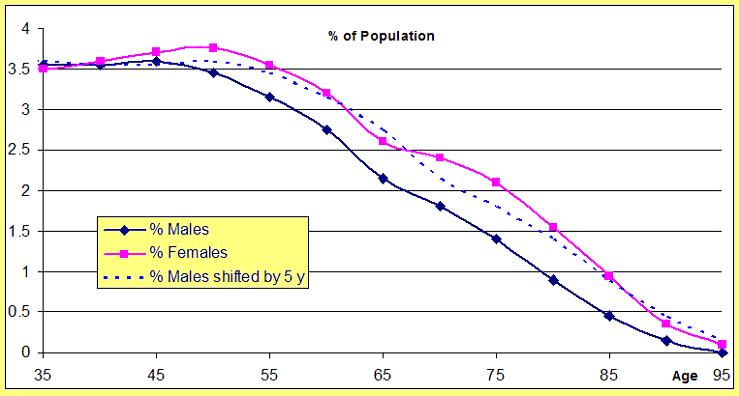 Caption: Percentage of Europe’s population versus age, averaged over 2010 and 2015 to remove the influence of birth rich years. The final die-off starts at 45 to 55 years of age. Pink squares are females, blue diamonds males, and the hatched blue curve is the male curve shifted right toward older ages. It must be shifted by at least 5 years in order to coincide with the females’ curve. [adapted from: S. Vongehr: Hyper-Aged Men finished off by Ageism and Misandry: From Deadly Discrimination of Men in Society, Social Science, and Andragogy Practice, toward Emancipatory “Male”]

The men’s “privilege” of early death comes with suffering. The feminist literature is somewhat aware of that, at least in relation to select issues that still allow blaming men:

“the systematic destruction of the male body in sport is framed as empowering for masculinity. Ironically, the battle worn athlete is subjectively hypermasculine when objectively he may be physically disabled” (White, 1995).

However, relative to old females, old men are generally physically disabled. Poor health leads to early death, especially in old age when self-endangering violent behavior ceases to be a significant cause of death. Research aimed at extending life span does generally not aim directly at prolonging life in old age, but instead focuses on more healthy lives as early as possible. Understanding the connection between long term health and dying is important for grasping the scale of suffering. Quality of life is closely related with health – almost anybody in their thirties already yearns for the vitality they remember having had just five years earlier. This topic is not about men enjoying life so much that they may as well pay the price of leaving a few years early. Rather, on top of the stress that leads to faster aging, and on top of living five to six years less on average, males feel five to six years more fragile from at least about 35 years onward and for the whole rest of their life!

Once more for clarity:

The Hyperaged Men Description is about the enormous scale of male suffering in today's social reality. On top of the stress that leads to faster aging, and on top of living six years less on average, males feel five to six years more fragile from at least about 35 years onward and for the whole rest of their life!

The special status of old men has been discussed early (Thompson, 1994) and in much detail in the feminist literature (Arber, 2003), including the implicit recognition of men’s poor health and low life expectancy as characteristic for disenfranchised groups, similar as with poor Black men who desperately try to prove dominance by unhealthy and dangerous displays of courage and physical vigor (Anderson, 1999; Staples,1995). The conclusions however never break out of the preset framing. Old men are depicted as oppressors that ‘had it long coming to them,’ never as victims forced into their predicament by the evolved social structures, which includes biological realities such as testosterone levels.

Why have you not heard anything about the Hyperaged Men Description anywhere yet?

The Hyperaged Men Description is not touched with a ten foot pole and refused by all journals for several years now. Anything not supporting the idiotic nonsense of today’s feminazi controlled social “science” is suppressed. Editors never make it past the abstract:

There are about 1.4 times more women than men above 60 years of age. The age distributions’ shapes prove that socio-biological reality ‘hyper-ages’ men by about five years beyond their nominal age. Taking into account distributions of general intelligence, and that intelligence increases interest in education, one nevertheless predicts one male for every female participant in adult education programs for the elderly. In reality however, women present the overwhelming majority, outnumbering men by up to 10 to one! Males are strongly discriminated against in lifelong education efforts, further deepening their general discrimination and unhealthy, in relation to this issue literally deadly social isolation. We discuss such issues and relevant social theory and practice. Our hyperaged, exhausted men description renders this work belonging to Advocacy Gerontology, advocating for older men as those doubly discriminated by ageism. But recommendations cannot stop at fixing symptoms where it is too late. We argue for truly emancipatory, that is system-theoretical, “Asperger autistic male” theorizing.

More of the apparently unpalatable evil in the suppressed article: ‘Under-representation’ (relative to the overall population) of Blacks in higher education is never used to justify concentrating efforts onto the majority. Education is instead transformed in order to help increasing the participation of underrepresented groups. Otherwise, there would be outrage, even if the issue at hand is still far from deadly. Imagine a scenario where women drop out of education due to deaths, and say that it occurs upon childbirth and is preventable by education. Imagine the outcry if the education would not be transformed to prevent the deaths, but instead we focus on educating males because women likely drop out anyway. Or imagine that the lower life expectancy of Blacks were even worse than it is and thus significantly contributes to their lower participation in education. And let us imagine that instead of using the educational efforts to reverse these trends, we simply stop worrying about the absentees. To even suggest considering such may already disturb many, but something just like these scenarios actually happens. Older men drop out of the population and thus out of adult and elderly oriented educational programs. The main culprit is widely acknowledged to be the lack of social interaction such as the participation in adult education! Education itself is elsewhere transformed consistently, aimed at diminishing racial and gender gaps as long as they persist. Should not also adult education and lifelong learning be reformed in order to help males participate as long and as socially supportive as possible, until the huge gender gap is resolved?

If you are interested in that such research is not suppressed, if you would like that such is being noticed and that researchers who dare being scientific are allowed to survive in today’s “scientific” community, maybe you need to do more than feel righteous for five minutes before clicking to the next viral thing that came along this week. “Science” blogs or the “manosphere” do not touch anything too scientific about gender either - they have their own agendas.