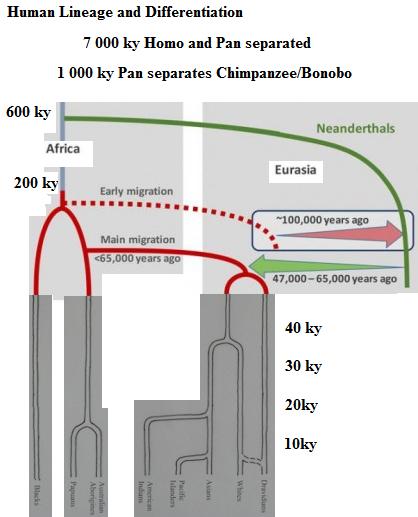 One early Out-Of-Africa (OoA) wave occurred ~600 kiloyears ago (according to OoA theory that is, but it is still open whether Asian orangutans or African chimps are our forefathers - the genetic closeness between African humans and chimps may come from human-pan interbreeding before the bonobos split from the common chimps). Anyway, according to OoA, population pressure in Africa pushed sub-populations of apes north, where the climate became just about survivable by those apes. In the north, due to the large temperature differences between the seasons, they became more caring and smarter; 'K-selection' causes the birth rate r to drop (see ‘r/K-theory’). Apes in colder climates cannot breed as rapidly and instead care longer for their offspring. The evolutionary selection in the variable and often very cold climate provides K-selection, shaping apes into more intelligent races, and so the Neanderthal evolved.

OoA theory holds that 65 kiloyears ago another wave of migration northwards occurred. Actually, the gene landscape in Africa, including high variability, show that apes were moving south repeatedly, bringing high IQ genes that then decayed as they are selected against in the African climate. Moreover:

But let's assume OoA, because the connection between IQ and variable climate does not depend on whether the migrations went one way or another. The Europeans, then Neanderthals, would have been more caring and less frequently breeding, because they had become more intelligent apes – their children needed longer to mature. Being more caring, they were also welcoming and friendly, and so they would have let the Africans interbreed with them. The Africans, breeding more vigorously, would have completely absorbed the Neanderthals, which would have destroyed the Neanderthal’s culture and decreased the maximum intelligence that humankind had attained.

"As they spread they came across archaic humans, descendants of earlier out-of-Africa migrations. These included the Neanderthals, Denisovans and Homo erectus – and none of them survived the meeting." Source

Oh boy - what about today's OoA migration? But then, OoA is incompatible with evidence such as the continuous East Asian line of cold adapted apes with characteristic teeth and high culture since long before 65 kiloyears ago until today. Caucasians derive from Cro-Magnon-Neanderthal mixtures with almost no African admixture since long before 65 ky.

Anyway, the mixture population, whether Neanderthal-African as according to OoA or Neanderthal mixed with Cro-Magnon,  presented a wide variability, an un-adapted gene mixture in the thus (due to the mixing) more rapidly changing social environment. And so, via natural selection including assortative mating, the modern human evolved in the north. Caucasians have still 3% of the originally 10% Neanderthal admixture in their genes.[1]

Today, the social systems evolved very fast in recent history, and suddenly, due to modern culture, the strong breeding pressure of the Africans can (again?) unleash into the north, which is, as usual, less frequently breeding and welcoming and friendly. K-selection still depresses the birth rate of northern intelligent apes; the current birth rate in China is 1.66, almost as low as Germany and Japan (both 1.3), and they all have similarly high IQs.

Once again, the average global IQ is decreasing rapidly.[3,4,5] Again, a mixture population of wide variability also comes into existence. Assortative mating and elite protecting itself – what will happen this time? Will the advanced culture be again completely destroyed as it is certainly starting – see places like Detroit? Will a new, yet more advanced race of humans come about again although there is no selection pressure for high intelligence?

The East Asians have stopped immigration. This time, perhaps, if they can stop their own decay [6], the most advanced cultures are not first destroyed in order for something more advanced to rise from the ashes. Or, if the OoA is as wrong as it is, perhaps human culture will be destroyed like never before? Or, most likely, all this does no longer matter since artificial intelligence takes over anyway now and the mere biological apes, these raping, deceiving, ridiculous animals, are finally obsolete - that would be the best given the suffering in the world.

[3] Michael A. Woodley, Jan te Nijenhuis, Raegan Murphy: “Were the Victorians cleverer than us? The decline in general intelligence estimated from a meta-analysis of the slowing of simple reaction time.” Intelligence 41, (2013) 843-850