Hayley Mann
A preliminary study on the application of thermo-microbiology and its relation to time of death has been released by Professor Isabel Corcobado and colleagues at the University of Granada.  The ultimate goal of this project is to use a microbiological indicator along with existing forensic techniques in order to determine time of death in forensics cases more accurately.

Corcobado's research established the initial methodological basis to create a protocol using thermography and microbiology in forensics.  Such a protocol would provide a new criminalistic approach in estimating time of death.  Forensic entomology, the study of insect life cycles on cadavers (flies, beetles, cockroaches, mites, etc..) is another example of using organisms as time of death indicators in crime scene investigations.

Variable environmental conditions can speed up or slow down the otherwise constant rate of decay which decreases the accuracy of time of death estimations.  However, it appears that microorganism growth on cadavers remains constant regardless of environment.  If this approach is applied with existing forensic dating techniques, the margin of error associated with time of death estimations will be reduced.

"Our experiment consisted of a variety of forensic situations, natural death or not.  It seems that microorganism growth rates are independent from environmental conditions and might be useful for dating," Corcobado said.

Corpse microorganisms and their relation to time of death parameters were established by studying micro-organic growth on cadaver remains and temperature, along with known time of death.

During different stages of decomposition, microoraganisms emit different thermal signatures.  This thermal signature can be detected by thermographic imaging.  The University of Granada team created this new approach to estimating time of death by using traditional microbiological methods along with new thermographical and weather measurement tools. 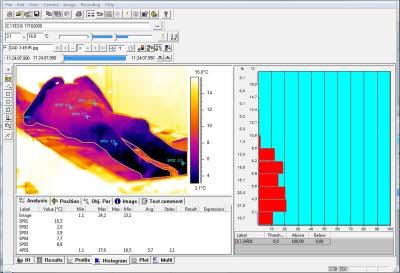 In thermography, cameras that detect infrared radiation in the electromagnetic spectrum are used.  By using thermography cameras on decomposing bodies, the thermal growth signatures of microorganisms can be detected and correlated back to time of death.

In order to construct this relationship between growth rate, decomposition and thermal signature, the authors of this study analyzed 240 different samples taken from cadavers and 352 samples taken from living donors.  However, the study was conducted by analyzing the thermal signature of only one microogranism species.  More research must be continued in order to validate this method for forensic purposes.  Preliminary results were published in the Journal of the Biologists' Association of the Autonomous Region of Madrid.

The researchers report that the aim of this project was to further study microbial organisms during the stages of decomposition and putrefaction in hopes of discovering a better approach to estimating time of death.  This new technique would provide more definitive answers and therefore valuable information about crime scenes for forensic investigators.
The Alternate Allele
More Articles All Articles
About