Hayley Mann
In a previous article, I discussed the controversies associated with anthropological research and debunked myths regarding the true intentions of molecular anthropologists.  Furthermore, I also provided examples of Native American communities willing to work with researchers in order to reconstruct their ancestral heritage.   Native Americans, for the most part, are rational and scientists, for the most part, are respectful.

But what happens when research and religious interests collide and erupt in legal dispute?   Do left-leaning academics cave in to creationists of the Native American  persuasion or do they stand up for separation of church and state?   Presently there is just such a conflict occurring at the University of California, San Diego between the Kumeyaay tribe, University of California anthropologists and the UCSD administration.

Even though this is a controversial issue that deserves serious analysis, the whole situation really is reminiscent of a bad movie plot; the Kumeyaay tribe would like repatriation of 10,000 year old remains, UC anthropologists are ready to legally fight for retention of the remains and the UCSD administration wants, well actually, no one is really sure as to what exactly it is they’re trying to accomplish—hence the bad movie plot.

In order to help mediate such conflicts of interest when no compromise can be found, NAGPRA - the federal Native American Graves Protection and Repatriation Act - was established.  This Act pertains to federally funded institutions and requires that human remains and other sacred objects be inventoried within a certain period of time. The ACT also includes guidelines for repatriation once cultural affiliation for a federally recognized tribe has been established.

As for the intricate story plot itself, it’s rather long, but here’s the synopsis:

The UC San Diego University House, which includes the Chancellor’s residency, resides on a beautiful seven-acre piece of property.  The house has been condemned since 2003 due to structural problems.  It was determined by a committee that the house should be demolished and rebuilt on the condition that archaeological issues are resolved since the house was built on a known Native American burial site. 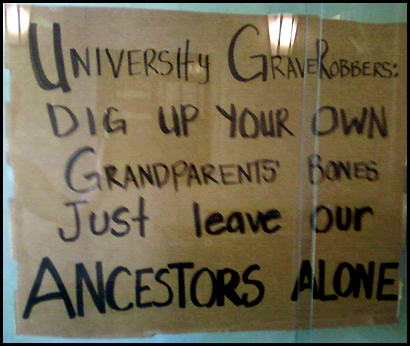 In 2006, the Kumeyaay Cultural and Repatriation Committee wrote a letter to UCSD and requested that remains unearthed in 1976 during a previous renovation of the house be given to the tribe.

However, these remains were dated to be 10,000 years old and therefore of great significance to researchers.

The question now was to determine whether or not the remains were culturally identifiable and therefore, falls under NAGPRA law.

After a review conducted by UCSD physical anthropologist Dr. Margaret Schoeninger and a University of California system wide expert panel, the remains were determined to be culturally unidentifiable—meaning UCSD is within their legal rights to hold the remains.

At the same time the expert panel made that decision, UCSD administration had already been arguing that they were culturally identifiable and were taking steps towards repatriation.  Later on, the UC Office of the President advised that culturally-unaffiliated remains should not be given to the Kumeyaay.

However in a peculiar turn of events, UCSD Vice Chancellor Gary Matthews wrote a letter to the Department of the Interior which stated that UCSD did acknowledge the remains as being culturally non-identifiable, but was still seeking approval for the remains to be given to the Kumeyaay regardless.

Dr. Schoeninger opposed this action because she felt that, “it was against federal law” and therefore expressed her concerns to other UC committees.

To further investigate this story, I interviewed UC Davis archaeologist and UC review panel member, Dr. Robert Bettinger.  On the day of the interview, there happened to be a demonstration against his facility and protesters were demanding that artifacts and remains held at UC Davis be returned to Native Americans. 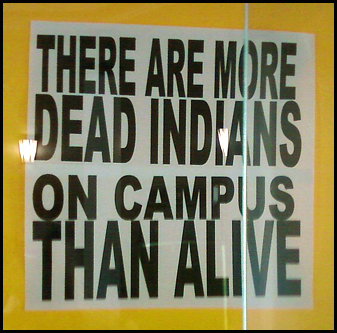 I asked Dr. Bettinger if he thought such a task would be possible.  He mentioned that it wasn’t possible to give everything back considering some items are not culturally identifiable.

“You can’t say ‘give it back’ if it never belonged to you.  You can’t give something ‘back’ to a group it doesn’t belong to.  NAGPRA makes it clear that cultural affiliation must be demonstrated and can never be assumed,” explains Dr. Bettinger.

Both Dr. Bettinger and Dr. Schoeninger feel there is a universal lack of understanding as to what NAGPRA actually says.  This misinterpretation typically leads to the viewpoint that the scientific community is being non-compliant.

It should also be noted that NAGPRA was developed with the understanding that researcher interests and Native American interests are sometimes irreconcilable.

Dr. Bettinger elaborates, “NAGPRA says that both interests are protected.  Anyone who says that’s not true is subverting NAGPRA."

In other words, both entities have the right to exist and when individuals disregard NAGPRA it’s the equivalent of saying a compromise cannot be made.

I was unable to interview the protesters so I can only make the assumption that the ethics of using culturally sacred objects for research purposes was first and foremost on their minds.  Although it’s understandable to take the moral road on this dispute, but for obvious reasons, there must be a line drawn between faith-based reasoning and the law. 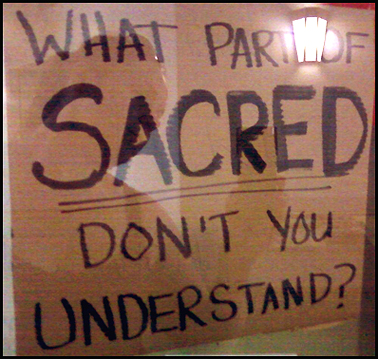 In regards to the present UCSD situation, the Kumeyaay tribe believes their people inhabited the land 'since the beginning of time' and therefore the 10,000 year old remains rightfully belong to them.

Sympathizing with Native Americans is completely understandable since they have been severely wronged throughout American history, but if you believe in separation of church and state, then you are making an exception and therefore discriminating between religions—all belief-based evidence should be disregarded in court.

After UCSD’s acknowledgment that the remains were culturally unidentifiable, the Kumeyaay dropped the request for acquisition of the remains and cited such a designation as insulting.

Overall, both Kumeyaay and UC anthropologist interests are clear.  However, while interviewing Dr. Schoeninger, I pointed out that it was odd to refer to UCSD faculty members and UCSD administration as two separate entities.  Why didn’t UCSD concur with their experts?

“If anything that has been the difficult issue.  It’s as if the administration of UCSD is trying to find a balance of its own people and the local community, and yet, we are UCSD.  That is the part that has been very difficult to understand,” Dr. Schoeninger said.

Showing cultural sensitivity is a good gesture, however, the timing and motives are questionable.

Is UCSD trying to rekindle their relationship with the Kumeyaay in hopes of having their blessing to rebuild the University House?  If this is true, then it’s a rather short-sighted motive because rebuilding the house would result in further destruction of a sacred site which obviously would cause further dispute with the Kumeyaay.

Maybe UCSD is honestly trying to do “the right thing”?  If this is true, then that means individuals who work for the administration are working as free-lance crusaders—a blatant disregard of their own experts and review panels.

If UCSD truly cares about the Kumeyaay then they should remove the University House and preserve the site.  Development of the property is virtually a lost cause anyway, so it’s a good opportunity to demonstrate cultural sensitivity.  Furthermore, if UCSD wants to do “the right thing” then they should consult their own experts and stand behind their decision.

To date, the Kumeyaay have submitted a new request to UCSD for another review of cultural affiliation.  It is unknown as to how UCSD will address this new request—hopefully it won’t lead to a bad sequel.
The Alternate Allele
More Articles All Articles
About