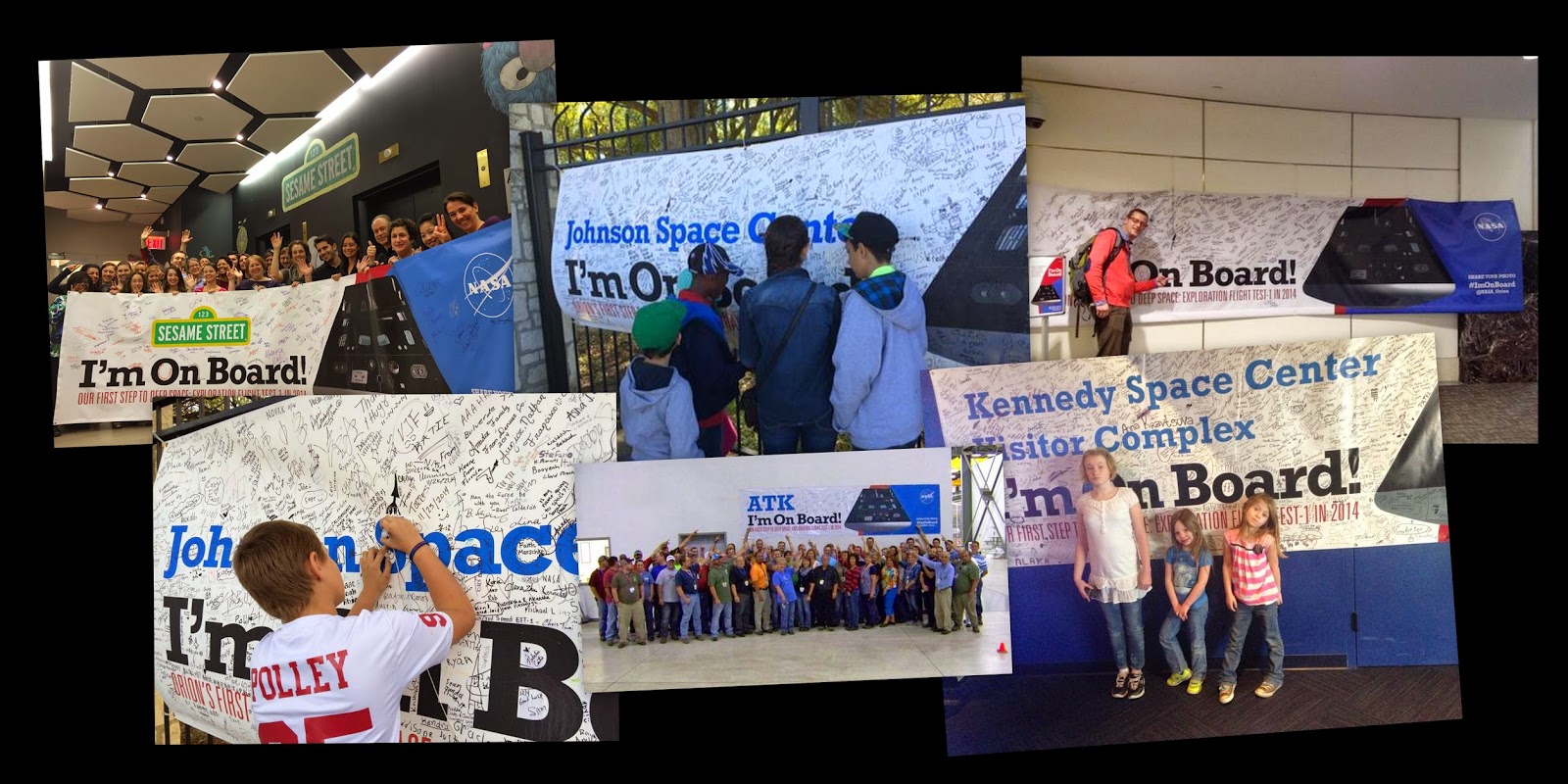 The first Orion spacecraft launch is just days away, so the excitement grows in America for this maiden flight, which will pave the way for future U.S. deep space missions. When NASA asked people earlier this year to show their support for Orion's first mission, the nation confirmed that Americans are really "On Board" for space exploration. "On Board" is the name of the agency's campaign to engage people in the spaceflight issues, letting everyone to share the enthusiasm about the upcoming manned space missions.

NASA proposed some ways to express support for the Orion mission. People were asked to channel their inner astronaut and artist by unleash their creativity on a coloring sheet, then show the world by sharing a photo with the artwork on social media. NASA also encouraged the public to submit their names by Oct. 31, that will fly on a microchip aboard Orion when it launches. "But the journey for your name doesn't end there. Once submitted, your name will automatically be entered to fly on future exploration flights and missions to Mars, allowing you to rack up frequent flier miles as a member of a global space-faring society," NASA said.

The initiative is targeted to young people, the future astronauts. Thus it is strongly endorsed by the most beloved Sesame Street characters like Elmo, Cookie Monster, Grover, and Slimey. NASA and Sesame Street share comic strips, videos and graphics of some of their most popular Muppet characters interacting with Orion concepts to help build awareness of human spaceflight, Orion’s flight test and NASA’s Journey to Mars.

"By weaving in STEM education themes, stimulating preschoolers’ natural curiosity and emphasizing the team effort it takes to place humans on Mars, this partnership is a natural extension of Sesame Street’s mission to help all kids grow up smarter, stronger, and kinder – all while moving the next generation one step closer to the next giant leap for humankind," NASA noticed.

One of the young, future astronauts is 17-year-old Abigail Harrison who runs its own blog at astronautabby.com, expressing her astronaut aspirations. She's also "On Board" and has been invited behind the scenes at NASA’s Kennedy Space Center to provide press coverage and commentary during the upcoming Orion launch. "Orion is the United States’ next generation deep space vehicle,” explains Harrison. “Since the end of the Apollo program, human space exploration has been confined to low-Earth orbit. With Orion and heavy lift launch vehicles like Space Launch System, we will once again be capable of pushing human space exploration beyond this boundary.”

Seth Statler, NASA's Associate Administrator for Legislative and Intergovernmental Affairs, reveals that also many members of Congress will witness the launch. Needless to say, the launch will gather America's veteran astronauts as space shuttle mission's participants Sam Durrance, Bruce McCandless, Mike McCulley, Jerry Ross and Winston Scott are among those scheduled to attend.

The public is obviously invited and the launch will be easily seen in Space Coast. “The Orion launch will be visible from many areas across the Space Coast, but there’s only one way to feel the rumble, experience the excitement and get up to date, minute-to-minute information from NASA TV, astronauts and space experts — and that’s at Kennedy Space Center Visitor Complex,” said Therrin Protze, chief operating officer of the Visitor Complex. “This is your chance to be part of history in the making and tell your kids and grandkids you were here when we achieved our first steps toward Mars.”

The Orion spacecraft and its United Launch Alliance Delta IV Heavy rocket are on track to lift off Thursday at 7:05 a.m. EST, the opening of a 2 hour, 39-minute window for the day.