Martin Gardiner
A recent edition of  ‘M/C – A Journal of Media and Culture’ features one of the very few, perhaps the only, fully blind, peer-reviewed academic papers on sugar pigs. Author Toni Risson, at the University of Queensland, Australia, first defines sugar-pigginess. “Sugar pigs are traditional confections shaped like sugar mice with little legs and no tail.” And then goes on to refine the implications of sugar pig consumption – starting at the beginning : 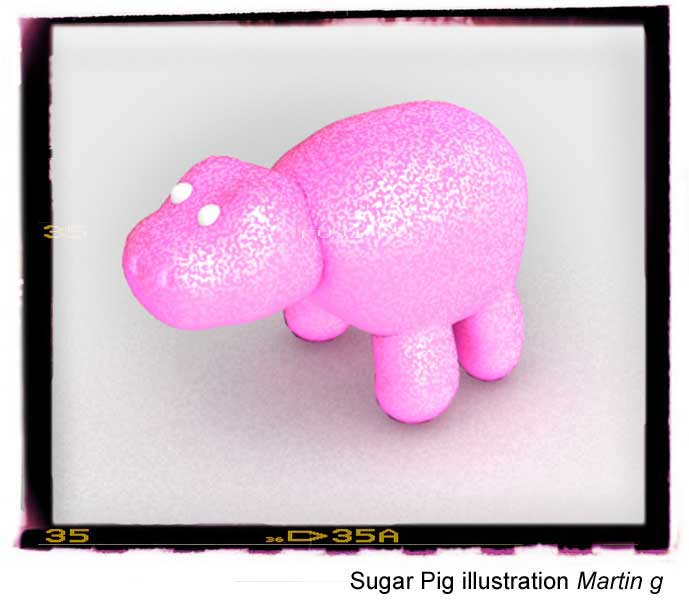 “As an imagined border between the private world inside the body and the public world outside, the mouth is an unstable limit of selfhood.”

“The mouth is a border between the self (the eater) and the other (the eaten), so what is eaten (the other) eventually becomes the eater (the self).”

And going on to note that (in the case of real pigs) :

“… because the pig’s body is pinkish, soft, and flabby like a human body and because pigs were usually housed near or even inside human dwellings, the pig confounds the human/animal binary: it is ‘a threshold animal’ (Stallybrass and White qtd. in Ashley et al. 7).”

And thus, a performance of sugar-pig-eating might in a sense underline the animal-like nature of children.

“Children are ‘sugar pigs’ in as much as they disregard the conventions of civilised eating that govern the mouth, preferring instead to slubber, gnaw, lick, and chew like animals, to reveal the contents of their mouths and examine the contents of others, to put lollies in and out of their mouths with dirty hands, and to share single lollies.”

Perhaps then, the seemingly innocent act of a child eating a sugar pig may in fact reveal something profound about the human condition.

“The pig is commonly understood to be the antithesis of civilisation and, therefore, the means by which we understand ourselves as civilised beings. The child with a lolly, however, is evidence that the line between human and animal is a tenuous divide.”

Here is a link to the full paper in the special pig-related edition of M/C (October 2010) Sugar Pigs: Children’s Consumption of Confectionery