Martin Gardiner
The word ‘Nerd’ is thought to have originated in the US in the early 1950s – but it took three full decades before a comprehensive academic paper describing ‘Nerdism’ appeared. As the authors of the study explained at the time :

“It is not clear why a social transformation of such depth and proportions has so long escaped the scrutiny of social scientists; perhaps they are too close to the issue.”

Whatever the reason, ‘The Nerd Report’ remains to this day one of the most extensive and far-reaching nerdological investigations ever undertaken. The work was performed at the Homa Lab of Arizona State University – headed by professor Donald Homa (pictured) of the Department of Psychology, ASU college of Liberal Arts&Sciences.

Investigators Julie Omohundro, Nina De Lange, and Phillip S. Lasiter compared, correlated and contrasted the concept of Nerdiness with other categories such as Buffoon, Coward, Creep, Drip, Fool, Ingrate, Jerk, Liar, Scoundrel, Turkey, Wimp (and more). At the time, sophisticated  ‘Scaling Software’ had recently become available – prof. Homa explains “A scaling program refers to a computer program (or programs) that typically takes psychological data (like similarity judgements) and converts it to a representation that is typically map-like.” Thus the study was not only able to provide a multidimensional visual overview of nerdometry, but also cross-referenced nerdism with other psychological traits – Social Adeptiveness, Cowardice, Friendliness, Evilness, Extroversion, Dullness, Silliness, Repulsiveness, Effectiveness, and Intelligence etc etc. (For an example nerd-map see this 2-dimensional KYST- space plot) 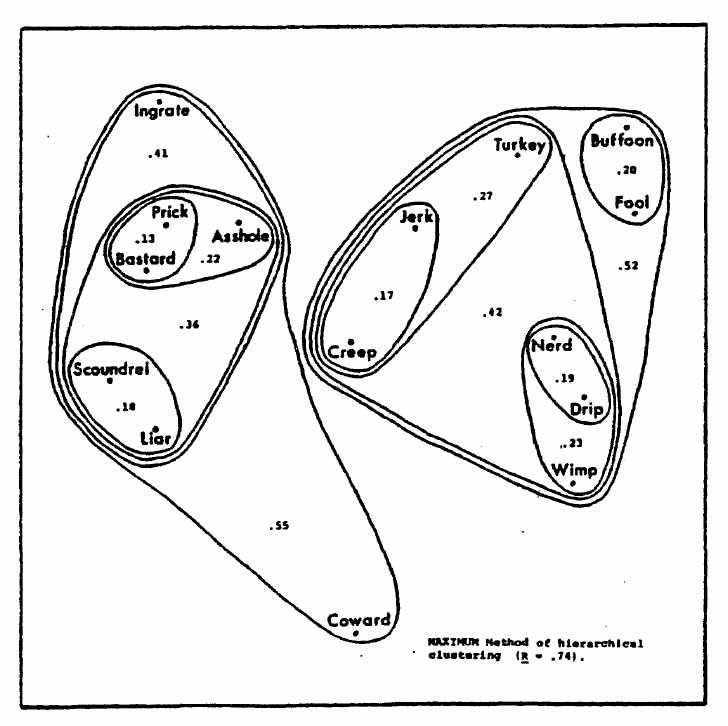 At the time of the report, the investigators noted –

- there is little doubt that they succeeded. Read ‘The Nerd Report’ in full here.

Notes:
[1] The paper also provided (in appendix A) the first extensive glossary of nerd-related terminology, e.g.

Lingua Nerda – Any language which is widely used as a means on communication between nerds e.g., “Oh, Wow”.

Nerdometrics - The science of measuring nerdism.

Epiphenerdenon – Any observable fact, occurrence or circumstance that is correlated with nerdism; cause-and-effect relationships may be inferred.