Martin Gardiner
Of all the available publications on 'Aircraft Nose Art', very few have investigated its psychological undercurrents.

An exception is ‘Aircraft Nose Art: From World War I to Today’ (1991). Chapter 1 of which was authored by the late George R. Klare, who was Distinguished Professor of Psychology at 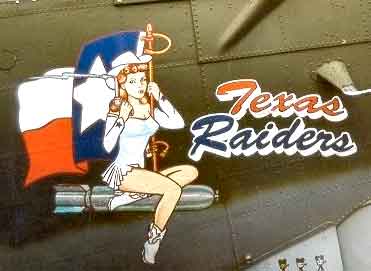 In his essay ‘Why Nose Art, a psychologist’s view’, the professor pointed out that “…psychologists regularly stick their nose into various aspects of human behavior, so why not into nose art?“ In the course of his research he reviewed well over a thousand aircraft-based artworks – finding that 55% of them portrayed female figures – of which 25% were completely naked.

But what of the underlying nose-art psychology?

“The picture does not seem all that clear.” wrote the professor – possibly questioning some observers’ pre-conceptions regarding possible hormonally-fuelled longings. For not all the ladies were painted as nudes. Some were merely scantily clothed. And “…at least some of the females celebrated were mothers (Enola Gay for example).”

Nevertheless, revealingly perhaps, it was discovered that as a general rule “Nose art got more daring with greater distance from high headquarters …” and so a combat bomber’s nose art “… would occasionally need certain strategic items of apparel added when the airplane returned stateside…”

Substantial extracts of the book can be read here.
Beachcombing in Academia
More Articles All Articles
About