Cap'n Ron Dagger, PhD
There are sometimes complaints that modern men only prefer one certain female body type, but we should blame evolution and prehistoric influences, according to a new study.

Professor Anthony Ray from the Department of Evolution and Human Behavior at Mack University investigated male mate preferences for female figures. 200 males, ages 17-21 and receiving extra credit in an introductory psychology class at a small liberal arts college, were presented with images of women who had differing lumbar curvature but the same buttock size and vertebral wedging.

A large majority of the men consistently preferred women whose buttock size and vertebral wedging most closely matched prehistoric ideals on what he calls the "Kardashian Lumbar Curvature Index".

By collating all of their responses and using sophisticated statistical methods, Ray determined there is an optimal angle of lumbar curvature which comes from what he calls a 'Brick House' ratio and forms a 46 degree curve from back to buttocks. 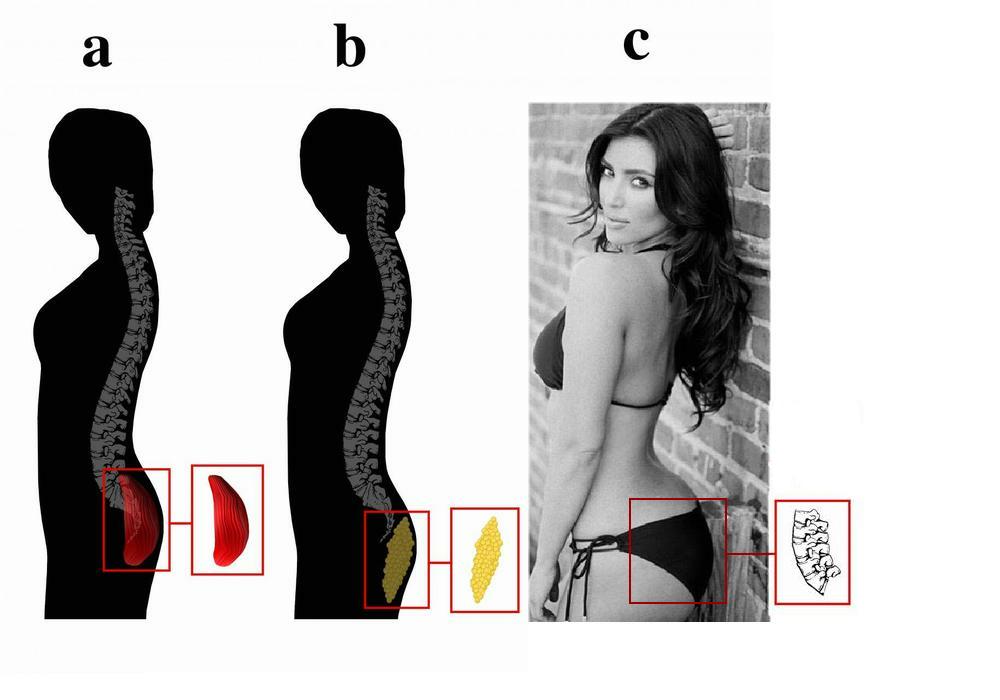 All the women above exhibited identical buttock protrusion yet many men invariably found C, the optimal lumbar curvature, to be more desirable.

Ray believes he knows why.

In prehistoric times, this optimal lumbar curvature evolved because women had to carry firewood and have more babies so they needed better support.  But it is difficult to get women to carry firewood or forage during pregnancy now, so why does it persist? Ray says he is not surprised that a sex-differentiated feature of human morphology would still be evident in standards of attractiveness today, what is more surprising is why some men once found thinner women like Cheryl Tiegs(1) attractive despite a clear evolutionary mandate.

What is the modern optimal female archetype, the kind of woman most likely to have the 46 degree curvature angle that ideal women evolved to have and men have evolved to want? Ray says the women most likely to have it also have linear proportions. For example, he lists a 36 inch hip measurement, a 24 inch waist and a 36 inch chest, which comes out to 45.5 degrees, as a good  'Brick House' ratio, and such women in modern times are likely to be of Armenian/Turkish descent and populate the Calabasas region of California.

"Heterosexual men expressed a tight fit between these evolutionary pressures and our modern notions of definition psychology," said Ray, so there is no point in fighting this prehistoric mandate.

Beauty is not 'in the eyes of the beholder' it is in the butt of the beheld. That is just adaptive logic.

However, evolution has also been acting on women, and women with optimal lumbar curvature have shown little interest in men of stereotypical northern European descent. So if you meet one, don't get more than your hopes up, bro.

Citation: Anthony Ray, 'Baby Got Back To The Future: The Evolutionary Mandate Of Lumbar Curvature And What It Means For The Future Of Sex-Differentiated Human Morphology', April 1, 2015

(1) Don't like the analogy? There may be a reason:

I be a Science Pirate. Arrrrgh. When I'm not spend'n time develop'n Antrrrax strains specialized to Ninja genomes aboard me ship, I'm cruise'n...