Through millions of years of evolution, the shape of an egg has evolved to an optimum – at least from a hen’s point of view.
For some humans though, this shape is less than ideal –  there are those who prefer instead the aesthetic appeal of a cuboid rather than ovoid. 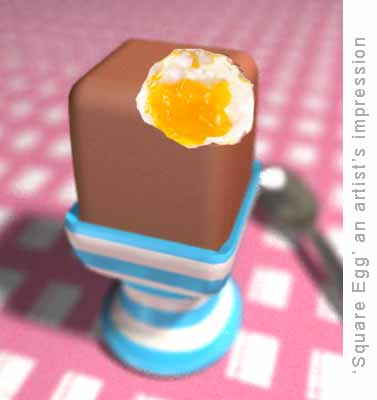 For technical (and ethical) reasons, this shape modification must necessarily be performed after laying rather than before. Prompting inventor Masashi Nakagawa to devise his
‘Apparatus for deforming boiled egg’  – for which he received a US patent (4,092,093) in May 1978.

“The boiled egg which has been deformed according to the present invention has a unique cubic shape, so that such an egg can be widely utilized in cuisine. It should be noted especially that the yolk is deformed in substantially the same manner as the white, i.e. in conformity with the external deformed shape of the boiled egg. Thus, there can be obtained a new, interesting boiled egg which is different from the conventional shape of a boiled egg.”

BONUS See this video of an ‘Egg Cuber’ in action. Which is said to be made by the Aluminium Housewares Company (Hong Kong) in 1977 – and  may, or may not, have been be based around Mr. Nakagawa’s patent.