Martin Gardiner
What is the optimum stroke angle for a duck’s foot when paddling?

Although a duck may already intuitively know the answer, the question has now been clarified for us humans as part of a recent research project undertaken at the prestigious California Institute of Technology (Caltech), in the US. 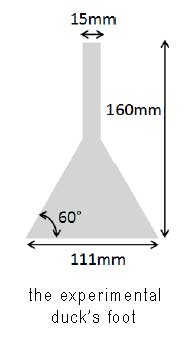 Research Scientist and Post Doctoral Scholar Dr. Daegyoum Kim performed the study along with professor Morteza Gharib. The team employed a range of experimental setups with mechanical flappers, clappers and paddlers in tanks of fluid which was seeded with silver-coated glass microspheres and illuminated by an Nd:YAG laser.

The resulting turbulence was captured by a DDPIV camera and later re-constructed as 3-D computer models. A delta-shaped plate [pictured right] was chosen to represent the propulsor such as a duck’s foot, which has a much larger area near the tip than near the base.

“Our results indicate that spanwise flow behind the paddling propulsor significantly affects tip vortex development and thrust generation. The distribution of spanwise flow is dependent on the propulsor shape and the Reynolds number.”

- say the team, and further noting that, in the case of ducks*,

Characteristics of vortex formation and thrust performance in drag-based paddling propulsion is published in the July edition of the Journal of Experimental Biology, July 2011, pp 2283-2291.

*Note: The results may also be applicable to Muskrats

BONUS : Quote provided by the Gharib Research Group: “We must measure what is measurable and make measurable what cannot be measured.”   — Galileo Galilei c. 1610