It finally happened. One of the purple striped socks my daughter Lana had given me as a birthday present in Winnipeg a few years ago vanished at some stage while I was doing laundry in Los Angeles, after we gave a lecture at UCLA.

As our itinerant life style (Gordon, 2011) results in frequent changes in laundromats (presently in Osoyoos, British Columbia), there is no going back. My wife, Natalie, ordinarily a scientist with the rationality and humor of a StarTrek® Vulcan, nevertheless advised that I should keep the remaining sock of the pair because adding an odd sock to a wash reduces the probability of losing a paired sock.

Perhaps this is accomplished via quantum entanglement of socks (Figure 1). Indeed, we will find that there are many body aspects of socks. In any case, with our increasing tolerance of alternative lifestyles, the single sock is no longer scorned, but rather celebrated (Copeland, 2008), so I will concentrate on the complementary problem of how to make sure one has a matched pair of socks to wear.

Figure 1. The sock buddy system. From (Easterling, 2013) with kind permission of Lonnie Easterling of Spud Comics.

Some years ago (1993) a clothing store in Winnipeg was closing, and had a sale on socks. They had a bin from which my kids and I were able to dig out 42 pairs of identical grey socks. An advantage of grey with a gentlemanly octagonal pattern is that the kids would not wear them. Not their style (Figure 2). I still have 22 pairs of them at this writing (2014), but unfortunately did not think to record their number versus time.

Forty have indeed vanished, presumably one by one, spread across North America no doubt, only a few discarded for holes, but every day I can still have a matched pair. They are slowly getting worn out, but as no individual sock is deliberately selected to be washed each week, they are lasting a remarkably long time.

Figure 2. One grey sock amongst many. 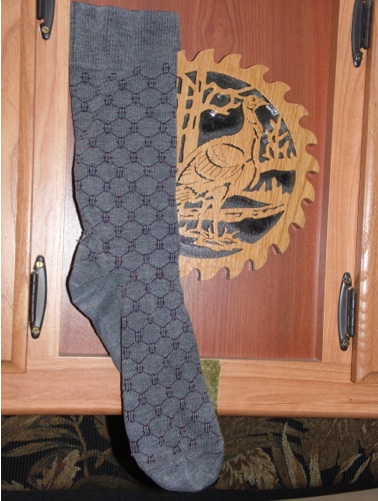 But Lana broke the perfection of my solution to the missing sock problem, with that now lone striped sock amongst the uniform grey ones (Figure 3), and that set me thinking. Have I really arrived at the optimum solution? If I were to advise others to buy many identical socks, how many would I propose?

If I were to copyright the idea and try to sell it to sock manufacturers, what size package would I recommend they offer (at a discount, of course)? Should one purchase 1000 identical socks and never worry about the lost sock problem again? Or would 100 do? What is the tradeoff between sock quality (and presumed durability) and number of socks? We take note and get depressed when one sock of a unique pair disappears. But life is rosy when all of one’s socks are the same, and the escapees escape unnoticed.

Figure 3. One lonely striped sock on top of a pile of the 44 remaining communal grey socks. 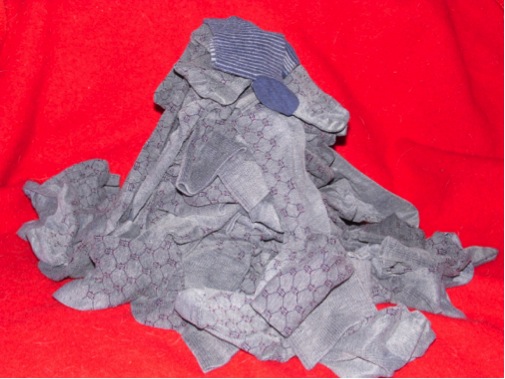 The branch of mathematics dealing with socks has hardly begun (Bowden et al., 2005). The physics of the missing sock has been reviewed (Empress, 2010) and found wanting, though psychiatric (Harley, 2011) and out of this world hypotheses abound (Figure 4). Here I will try to place sockiatry (yes, a higher discipline distinct from sockology (Leibstrom, 2005)) on a firm footing. I pose and will attempt to solve the following outstanding puzzle:

How many identical socks should one buy for lifetime sock sanity?

Figure 4. Where good socks go. From (Farley, 1993) with kind permission of David Farley. 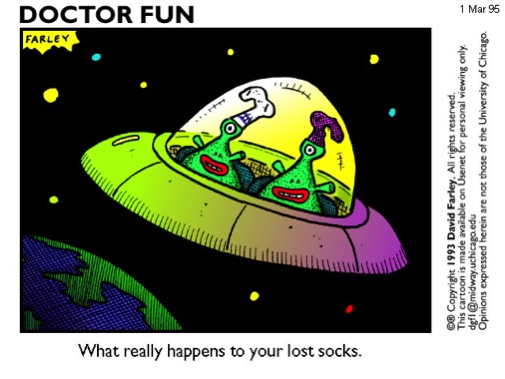 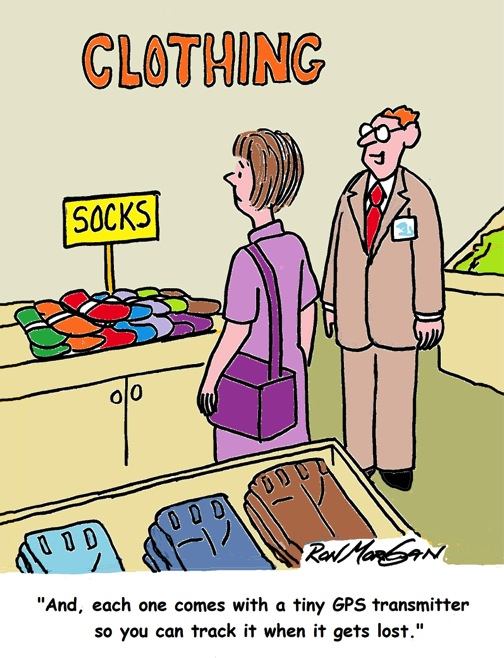 Bogomolny, A., 2014. Number of Trials to First Success. http://www.cut-the-knot.org/Probability/LengthToFirstSuccess.shtml

Morgan, R., 2013. And each one comes with a tiny GPS transmitter to help you find it in the laundry. http://www.cartoonstock.com/directory/l/lost_sock.asp

Vanity Socks, 2014. How many socks in a man’s wardrobe? . http://vanitysocks.com/how-many-socks-in-a-mans-wardrobe