Richard (Dick) Gordon
The earth has abundant energy sources, if only we would bother to tap them. Wind power has had its financial and ethical ups and downs, with wind farms using gargantuan, expensive wind towers decorating or despoiling the scenery,depending on your esthetics:

Wind power resources on the eastern U.S.continental shelf are estimated to be over 400 GW [gigawatts], several times the electricity used by U.S. eastern coastal states…. The furthest advanced of a handful of proposed U.S. offshore wind developments is in Nantucket Sound,off the Southern coast of Cape Cod, Massachusetts. This proposal has engendered a widespread, well-organized, well-financed, and politically potent opposition.This movement’s strength, and the apparent contradiction of such opposition coming from a population thought of as politically liberal and environmentally concerned, have garnered national press coverage….  The project would provide clean energy but would intrude on a beautiful, unspoiled natural area. One can see the wind turbines as an ugly intrusion on the seascape or as a beautiful portent of clean energy for the 21st century; as a threat to tourism or an opportunity for year-round local jobs; as a menace to marine and avian species or as pollution reduction; as a government-financed boondoggle or a hedge against foreign oil dependence; as an example of market solutions to environmental problems or as greedy developers spoiling Cape Cod yet further. Because there is an oil-burning electric plant in the same area, the possibility of wind electricity displacing oil electricity makes the air pollution and energy security aspects of wind energy locally immediate and easy to visualize [1].

As T. Boone Pickens said of his Pickens Plan to harness USA wind power: “I’m in the wind business…I’ve lost my ass in the business” [2]. Once we stop importing oil, with its price fluctuating due to world politics, wars, and market manipulation, the various renewable energy sources, such as wind, solar, geothermal, algal biofuel, etc., could start competing with one another on a level playing field, and the winners will sort out [3, 4].

Around 2003 I bought a then newly invented Nightstar shaking flashlight [5, 6]. It works on the old fashioned principle that a magnet moving through a coil of wire will generate an electric current in that wire. This is the dual to the electromagnet: pass a current through a coiled wire and it will magnetize an iron rod inside it. Dynamic microphones and loudspeakers are another dual pair of technologies based on the same principle [7]. The Nightstar powers an LED, and a few seconds of shaking its cylindrical magnet up and down through itsinduction coil produces light. The housing is rugged, immersible, and waterproof. Of course, one never has to buy batteries. The motto of the company, embossed right on the flashlight, is: "Nature and technology can co-exist".

I bought the flashlight as a birthday present for my wife, for use at our solar powered rough cabin in the woods of Manitoba, on a quarter section of wilderness we call Silver Bog. It is surrounded by 60 foot trembling aspen trees that sway in the frequent prairie winds. To make that flashlight work I had to shake its magnet up and down. And so I mused about harnessing the swaying of these trees, by roping a tree near the top and having the rope shake such a magnet up and down through an induction coil. I should have patented the idea, but recently was scooped [8]. As a theoretical biologist, I seem to have developed 10 thumbs, leaving the practical building of things to others. In retrospect, I've also wryly mused about harnessing the energy of exploding seeds [9], so I often don't take myself seriously.

Howard Rees and Michael Faigen treat us to a magnificent vision of a world powered by swaying trees. We just tie trees together with ropes, pulleys and pull-retract generators (PRGs) to get up to 1 kilowatt of power per tree:

The scale of an e-Tree installation can vary between those utilizing only a few trees (generating a few hundred watts) and those utilizing many thousands of trees (generating hundreds of KWs or even MWs)…. e-Trees installations promote the planting of trees (and hence, carbon sequestration) and produce electricity. e-Tree "forest rangers"… can be members of the indigenous population who shepherd the e-Tree farms by tending to the health of the trees (trimming, thinning and readjusting the PRG harnesses) and maintaining the equipment... [8].

Before you rush outside to tie up your own trees and start wind farming, best to learn from the experience of Scott McGarry and Chris Knight, who hitched ropes, pulleys, computers and cameras to a tree and tried out the idea. Indeed, they estimate that one eucalyptus tree they tied up could theoretically yield 0.5 kilowatts = 500 watts [10]. But they were only able to extract 50 milliwatts of power in a good wind, and just harnessed it for wireless communications [11]. So what is going on here, that we can extract only 1 part in 10,000 of the mechanical energy a tree takes from the wind? These researchers surmise:

This is due to a number of reasons: the tree dissipates wind power from all parts of the tree, whereas the experiments outlined considered just one point on the trunk. Harvestable energy is a fraction of the elastic energy within the tree, and losses due to internal damping and wind vortices cannot be harvested using the methods outlined in this article…. Of the proportion transferred to movement energy, just a small part of that will be available to a movement energy harvesting device for energy extraction. This is due to the fact that it is envisaged that such a device will only attach to one point or area of the tree, and not be able to take advantage of the movement of the many small leaves, twigs and branches widely distributed throughout the tree’s structure [10].

So much promise, so little power delivered! Trees are obviously very clever at dissipating wind energy, else more would be blown over [12]. Wind pruning [13] and culling over millions of years has probably selected for these tactics, such as multimodal vibrations between the main trunk and branches [14], and wind stimulates root growth [15]. Those trembling aspen at Silver Ridge are not dancing their leaves for my amusement, but for a reason. So let me suggest an evolutionary approach to the problem: domestication, i.e., we designate the criteria for survival. For example, using bonsai methods [16], could we force trees to grow in shapes that transmit more wind force to our ropes?

More subtly, can we grow trees with attached or embedded inductive coils, perhaps creating a symbiosis with bacteria that make permanent magnets [17], in such a way that they "dissipate" wind energy into electricity rather than into heat and air vortices? Here is a challenge for combining nanobiotechnology with some of the largest organisms on earth.

Finally, physics based computer animations now sway us that we are looking at realistic swaying trees [18, 19, 20, 21] down to the level of splashing of raindrops on the leaves [22] and the reciprocal effects of the tree on the wind, and thereby on each other [23]. With such fine software, we could now turn from delightful animation to a deep understanding of the physics of trees, and resolve whether or not they could be harnessed for wind power.

(Thanks to Ille Gebeshuber and Miranda Stuart for preposting comments!)

A conference on trees in wind has been held [12]. This depiction with kind permission of editor Bodo Ruck. 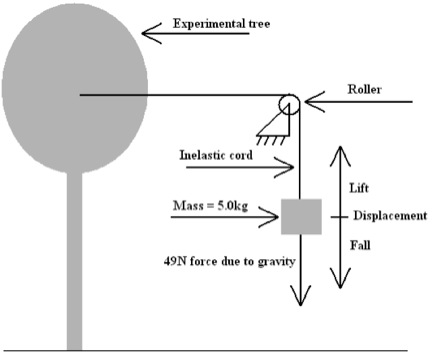 Experiment to measure wind energy from a tree. From [10] with kind permission of Multidisciplinary Digital Publishing Institute (MDPI AG). 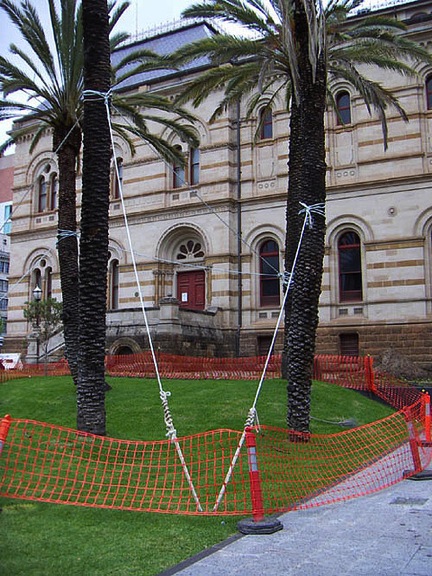