Browsing, as I do from time to time, recent German news in thelocal.de, I came across

Shouryya Ray, who moved to Germany from India with his family at the age of 12, has baffled scientists and mathematicians by solving two fundamental particle dynamics problems posed by Sir Isaac Newton over 350 years ago, Die Welt newspaper reported on Monday.

Following up the news, I find that there is a quite a bit of hype there, but nevertheless it is something of an achievement to have produced an analytical solution (i.e. one in the form of an equation, rather than leaving it to number-crunching by computer) to the following

The later 17th century was a period of boundless optimism regarding what one could do with calculus, but there were some problems that resolutely refused to be solved.  Some of these were integrations: it was not until the 19th century that Joseph Liouville (1809 – 1882) came up with a proper proof that certain elementary functions cannot have elementary antiderivatives.  Later in that century, Karl Weierstrass (1815 – 1897) presented the world with a pathological function which is everywhere continuous and nowhere differentiable.

The two mathematical giants of that time were indeed Newton and Leibniz, but they did not work alone.  On Monday I was watching on TV our Queen’s Diamond Jubilee Thanksgiving Service at St. Paul’s Cathedral.  Many of our leading politicians were there, looking bored as if they were at school assembly, which to many of them it must have been a reminder.  However, among other things I was struck by the architecture, as seen in a Microcosm of London Plate 080 – St Paul’s Cathedral from 1810.

Sir Christopher Wren was the architect who rebuilt St Paul’s Cathedral after the Great Fire of London.  However, he was also a significant mathematician and physicist of his time, and it seems to show, since I sense a knowledge of curves and geometry more advanced than those of the classical architects who inspired him.  Here he is, along with these two others: 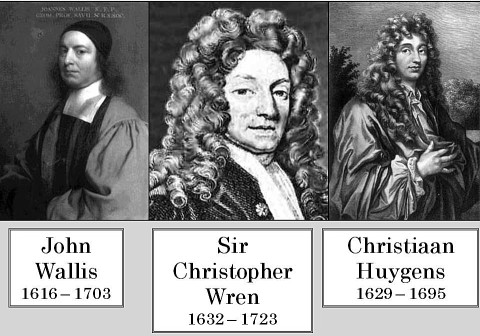 It seems to me that we spend much effort in teaching young people to come out with half-baked impressions of the achievements of today’s science, while things that were worked out with great mental effort by the giants of the 17th century, and are still important in everyday practice, are not taken on board.