I was watching the recent two-part BBC series Bill Bailey’s Jungle Hero, about Alfred Russel Wallace (1823 – 1913), in which Bailey and his hidden camera team travelled through Indonesia sampling the joys of the rainforest while following the great naturalist’s journey.  The first episode was spent on Borneo, the second on Sulawesi and the Spice Islands.  Wallace spent considerable time in Borneo, and wrote On the Law Which Has Regulated the Introduction of New Species (published 1855) — not quite natural selection, but definitely evolution with transitional forms.  This became known as “The Sarawak Law”. 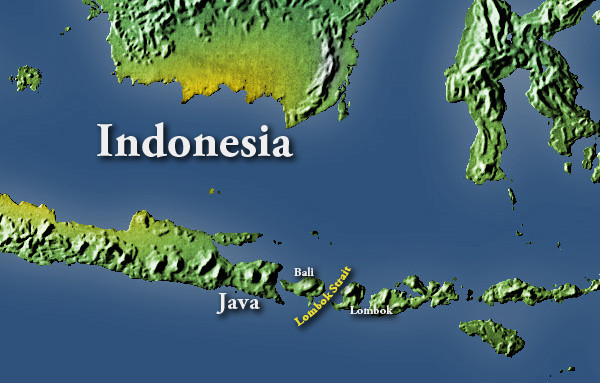 In 1856, Wallace crossed the Lombok Strait (above), and Bill Bailey followed.  Now this is only 20 km across at its narrowest, considerably less than the 21 miles across the English Channel.  This is where Wallace was struck by the massive difference in the flora and fauna of the two islands.  This at first seemed to completely overturn the “Sarawak Law”.  Further travels, however, revealed a boundary with Asian-type animals to the west, and the beginning of Australian-type animals to the east.  This boundary is now known as Wallace’s Line. 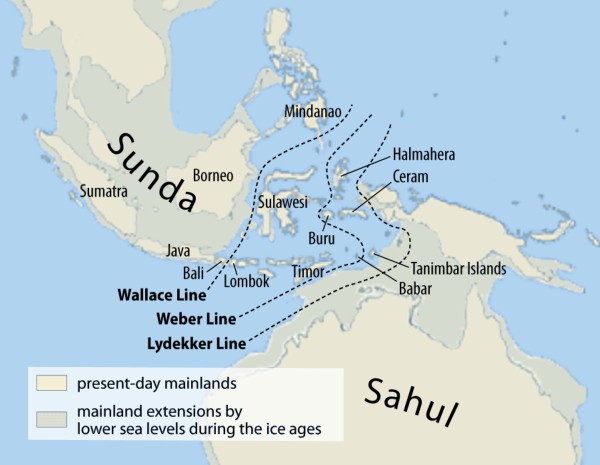 Wallace went on to great distinction, receiving the Order of Merit from King Edward VII in 1907.  However, as his Wikipedia biography states:

his fame faded quickly after his death.  For a long time, he was treated as a relatively obscure figure in the history of science.  A number of reasons have been suggested for this lack of attention, including his modesty, his willingness to champion unpopular causes without regard for his own reputation, and the discomfort of much of the scientific community with some of his unconventional ideas.

Bill Bailey, however, attributes Wallace’s eclipse to the British class system.  Darwin was a gentleman in the original, class-based sense of the word (as well as its more modern meaning), while Wallace came from a much more humble background.  This is rather illogical, since it was the very class-conscious Victorians who honoured him, while it was later that people let him slip from memory.  Well, BBC people do tend to be armchair class warriors, so they would say that, wouldn’t they?

My own speculation is that Wallace tended to be crowded out by the ‘big story’ effect.  Telling the history often tends to concentrate on one spectacular individual.  So when it comes to the calculus, Newton is favoured over Leibniz (especially in Britain), and Edison gets the lion’s share of the glory for the electrification of America, even though it was Tesla’s alternating current scheme which won out.

Monkeys, apart from some species in South America, are found in Africa and Asia, but not in Australia.  Even so, some macaques are found east of Wallace’s line.  Did they swim there?

Here are some macaques:

Here is a link to a video of David Bailey on Sulawesi encountering some Celebes Crested Macaques,
Macaca nigra (‘Celebes’ is a Portuguese version of ‘Sulawesi’, used by Europeans before Indonesia gained independence.)  From genetic analysis, these are closest species to the stump-tailed macaques of Borneo.  Although the Makassar Strait between Borneo and Sulawesi is much more violent than the English Channel, effectively separating the two types of fauna, the ancestors of these monkeys must have managed to get across some millions of years ago, and subsequently to have evolved into these very different fellows.

Inselaffen or ‘Island monkeys/apes’ is a pejorative German term for the British, first used (I think) in the early 19th century, when the Germans had their heads all filled with philosophy and romantic poetry.  It is rather like the term ‘Philistines’ used by artists in Britain for those they regard as less cultured, though this is ironic, since the original Philistines were probably far more ‘arty’ than their Hebrew neighbours.

Now here is a self-portrait of Celebes Crested Macaque and I ask: are these the original Inselaffen? 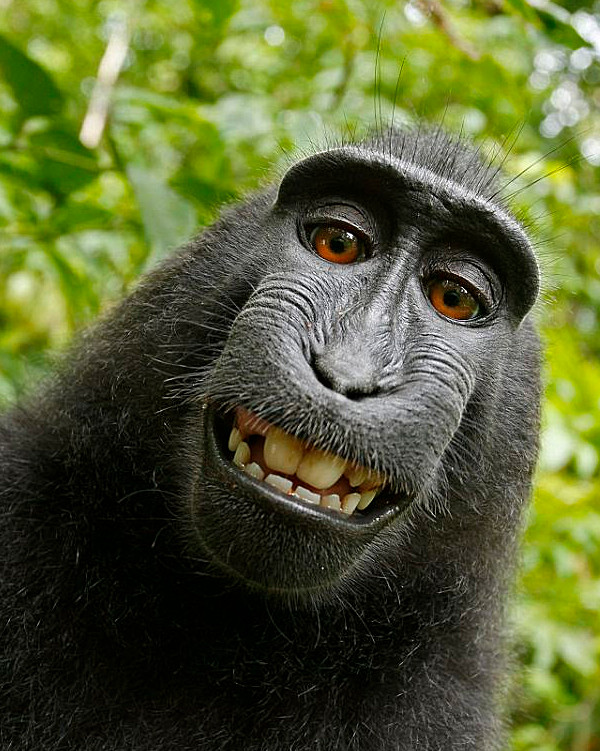