Once again, your resident tellytraveller has turned his gaze to the Southern Hemisphere, this time with second series of Coast Australia.  Episode 8 took us to New South Wales, and most spectacularly to Jervis Bay, a little under 200 km south of Sydney. 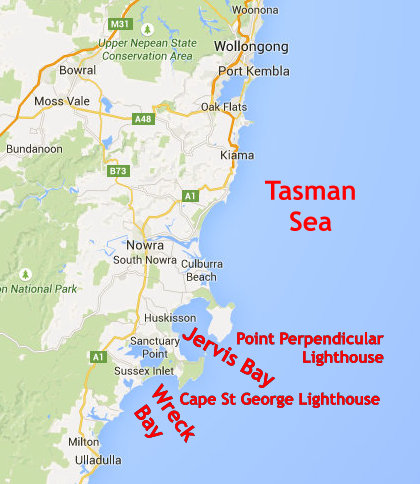 The bay is surrounded by two headlands, and against the advice of mariners but under pressure from land-based interests, the southern one was chosen for the Cape St George Lighthouse which was completed in 1860 and stood until 1889.  Because of its ill-thought-out situation, many ships seeking a safe haven in Jervis Bay instead ended up on the bottom in Wreck Bay. It was then replaced by the Point Perpendicular Lighthouse which operated from 1889 to 1993.

The East Australian Current sweeps warm and nutrient-poor water down the east coast of Australia from the Coral Sea into the cool waters of the Tasman Sea (NASA Earth Observatory), and so is not a source of rich fisheries.  Paradoxically, this leads to great biodiversity in the sheltered waters of Jervis Bay, especially as regards seaweeds.

Wollongong lies roughly half-way between Sydney and Jervis Bay, and the TV Episode introduced us to the work of Pia Winberg, who in 2008 obtained her PhD from the university there and then went on to study the great variety of complex polymeric carbohydrates called polyglycans which can be extracted from the different species, with potential medical applications including growth of stem cells and creating implants.  She has now started the Phyco Food Company based in Sydney, dealing in seaweeds for culinary use including Australian Ulva, Tasmanian Wakame, Undaria pinnatifida, Kombu, Sweet Kombu, Old Uncle Tom Cobley and All.  Below the cladogram is a picture provided by the company: they include both Chlorophyta, the latter being included with embryophytes (land plants) in the Viridiplantae.  The evolutionary history of seaweeds goes back a long, long way. 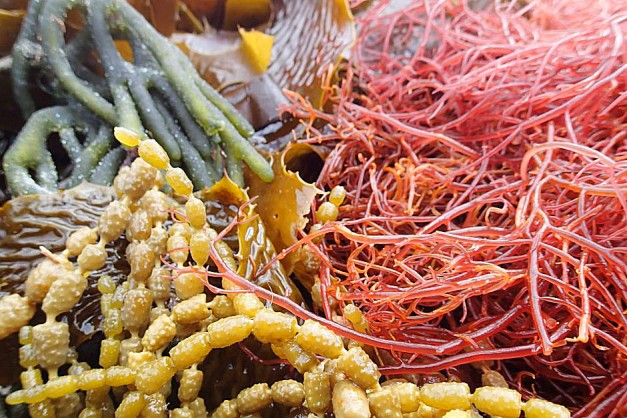 Work on seaweeds continues apace at Wollongong.  Omega-3 fatty acids come in a large variety, and are essential to mammals like ourselves.  But we cannot produce them ourselves, so we generally get them from certain plant oils or oily fish.  But even fish do not produce them directly but get them either directly or indirectly up the food chain from algae.  Abalone, as in this sashimi (picture: Abendstrom) are gastropod molluscs which are gastronomically much appreciated and can also act as a secondary source of omega-3, but they too get their omega-3 from algae. 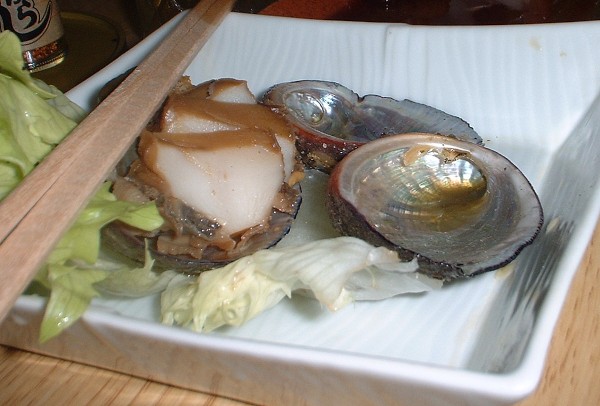 The demand for abalone is increasing, and farming them is a good commercial opportunity.  However, when farmed they can often be quite deficient in omega-3, so formulated feeds are available with supplementary PUFA (polyunsaturated fatty acids including omega-3) included.  However, there appears not to be a good return on PUFA in the feed when the abalone are harvested, in other words, rather short of a quid pro quo.  However, in work at Wollongong,

the group has found that feeding the abalone on Ulva (sea lettuce) greatly improves the situation.  In the graph below, the results show much more efficient uptake directly from the seaweed as compared to formulated feeds A and B, over a 12-month period.  (Interestingly, one particular species, Ulva prolifera, clogged up the seas off Qingdao during the preparation for the water events of the 2008 Olympics; my impression from reading this paper is that various species were fed to the molluscs — maybe they also appreciate a mixed salad!) 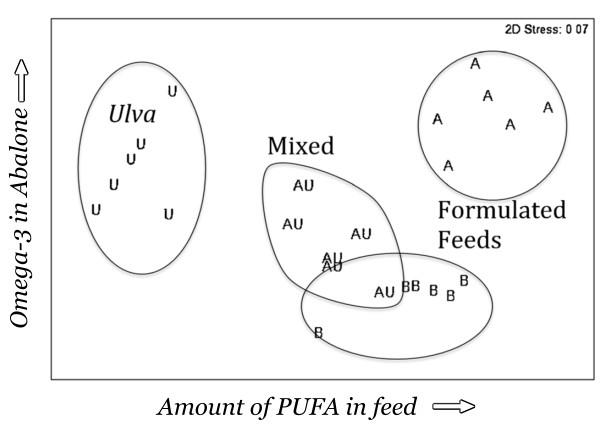 The TV episode then moved south to just across the border between New South Wales and Victoria, to the point where the coast makes a right turn and continues west.  About 5 km after the turn, off the coast lies Gabo Island, where for many years a couple with a Dutch surname were perfecting the art of growing pearls in abalone.  One especially magnificent pearl, set in a ring and seeming to show all the colours of the sea, was shown.  The programme was made about two years ago, and sad to say, the couple were on flight MH17 from Amsterdam to Kuala Lumpur which was brought down near to the Ukraine-Russian border.