And now we come to part three of this series

which is the world of the genes. However, this is a massive topic, and I’m going to split into two parts, roughly discovery and application.

The first clues were to come from a monastery garden. The monastery was Augustinian Abbey of St Thomas in Brno, where worked Gregor Mendel (1822 – 1884). His experiments with peas are now famous, and according to Wikipedia:

Mendel did read his paper, Versuche über Pflanzenhybriden (Experiments on Plant Hybridization), at two meetings of the Natural History Society of Brünn in Moravia in 1865. It was received favorably and generated reports in several local newspapers. When Mendel's paper was published in 1866 in Verhandlungen desnaturforschenden Vereins Brünn, it was seen as essentially about hybridization rather than inheritance and had little impact and was cited about three times over the next thirty-five years.

(Here again, a previous television programme suggested that his delivery to the Natural History Society was far too mathematical, and it went over their heads. I’m beginning to suspect television.)

After Mendel completed his work with peas, he turned to experimenting with honeybees, in order to extend his work to animals. He produced a hybrid strain (so vicious they were destroyed), but failed to generate a clear picture of their heredity because of the difficulties in controlling mating behaviours of queen bees.

Wikipedia again. And according to A Monk and Two Peas by Robin Marantz Henig, he continued with hawkweeds:

The plants von Ngeli suggested were hawkweeds in the genus Hieracium L. - now well-known for their complex interplay of apomixis and hybridization. What a terrible suggestion!

However it does not all end in tragedy, Mendel ended his days as the abbot of the monastery, collecting jokes and being loved for his gentleness and good humour.

In the years around 1900, Mendel’s work was rediscovered, both in accidental repeat of his experiments and new attention being paid to his papers. Four names stand out in particular:

Walter Frank Raphael Weldon (1860 – 1906), English; Hugo de Vries (1848-1935), a Dutch biologist who introduced the term mutation; Thomas Hunt Morgan(1866-1945), American geneticist and embryologist, who was a/the pioneer of working with fruit flies; and William Bateson (1861–1926), English geneticist. The struggles of ideas among these people are quite complex, in particular Bateson became famous as the outspoken Mendelian antagonist of Walter Raphael Weldon, his former teacher, and Karl Pearson who led the biometric school of thinking. This concerned the debate over saltationism versus gradualism (Darwin had been a gradualist, but Bateson was a saltationist). Later, Ronald Fisher and J.B.S. Haldane showed that discrete mutations were compatible with gradual evolution.

It is Bateson in particular that we will follow here.

Between 1900 and 1910 Bateson directed a rather informal "school" of genetics at Cambridge. His group consisted mostly of women associated with Newnham College, Cambridge. They provided assistance for his research programme at a time when Mendelism was not yet recognized as a legitimate field of study. The women, such as Muriel Wheldale (1880 – 1932), carried out a series of breeding experiments in various plant and animal species between 1902 and 1910. The results both supported and extended Mendel's laws of heredity.

It appears, from the programme, that Bateson’s genetic ideas were not thought highly of by the authorities in Cambridge. Short of funding, he had to conduct his experiments in an abandoned church. Most of these were on animals, an example being a pair of black chickens carrying a recessive gene for whiteness, so their matings gave rise to 3 black to 1 white offspring. For “manpower”, he had the under-appreciated girls of Newnham, who became known as “Bateson’s Ladies”. To show how under-appreciated, one only has to understand that women were not awarded degrees at Cambridge until 1948.

Wheldale, arguably the brightest of the team, found herself with a most difficult plant to work with, 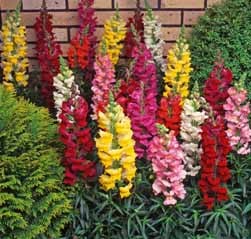 the Snapdragon (Antirrhinum majus), which comes in a bewildering variety of colours (as this snapshot from the Thompson&Morgan catalogue indicates). These are the product of several different genes, but the brilliant and hard-working Wheldale sorted them out. (She went on to become in 1926 one of the first woman lecturers at Cambridge.)

And if you regard Wheldale as one of the pioneer woman superscientists, you ain’t seen nothin’ yet!

Enter Barbara McClintock (1902 –1992), the 1983 Nobel Laureate in Physiology or Medicine. By the time we take up the story, she has worked at Cornell University and the University of Missouri, largely on maize, observing chromosome behaviour during cell division and applying X-rays to induce mutations. Atthe end of 1941 she moved to the Cold Spring Harbor Laboratory on Long Island, NY.

Now for some pictures of maize. Unlike the all-yellow corn that we all know, wild maize produces vari-coloured cobs. 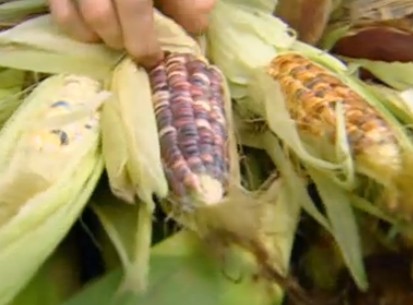 From 1944, McClintock started working on these, with a maize field given over to carefully controlled pollinations. Her only assistant was a man with a gun to keep the birds off her seedlings – not totally successfully, as her records show. Of particular interest were mosaic seeds, in which 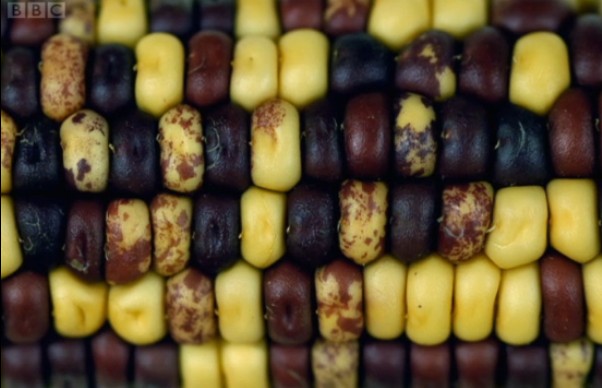 She identified two new dominant and interacting genetic loci that she named Dissociator (Ds) and Activator (Ac). She found that the Dissociator did not just dissociate or cause the chromosome to break, it also had a variety of effects on neighboring genes when the Activator was also present. In early 1948, she made the surprising discovery that both Dissociator and Activator could transpose, or change position, on the chromosome.

And that was several years before the discovery of the double helix!

McClintock’s work was not well received, any its importance was only recognized after the publication in 1961 of the paper in Journal of Molecular Biology by Francois Jacob and Jacques Monod “Genetic regulatory mechanisms in the synthesis of proteins”. Her later work included studying the ancestry of maize, with South American varieties of this plant. And we know today how important the conservation of ancestral cereals and other plants is.

One more in the series remains. In about a week, DV, botany to feed the world.

And for those that would like some appropriate music to finish, here is “In a Monastery Garden” from the Last Night of the Proms 2009 (the piece proper starts at 2:25 min):