Hank Campbell
Newly-discovered historical information adds weight to the belief that given what was known in the mid-19th century, Gregor Mendel, the Austrian (Moravian, now part of the Czech Republic) Monk was even further ahead of his time.  So advanced his work was criticized by some as 'too good to be true' despite surviving every challenge.

So little was known of what he called ‘Elemente.’ now known as genes, prior to Mendel that he had few places to read about it and had to deduce it for himself. He was interested in scientifically optimizing plant breeding, and his work led to later advances like the mutagenesis and genetically modified organisms common in most foods today. 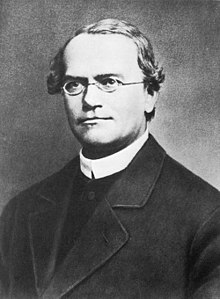 To make science out of what had previously been just folk wisdom, he had to learn the underlying biological processes that determine heritable differences between organisms. He had to figure out reproductive cells and fertilization. Challenging stuff for a religious scholar who didn't even have an R01 grant. His pea plant experiments from 1856 are now referred to as the laws of Mendelian inheritance.

Learning more about him in books would make him proud, because scholars have had to use inference. Whereas Darwin, who formalized his ideas of natural selection while Mendel was settling ideas about genetics, left behind thousands of letters, Mendel kept to himself. He only published two papers on his experiments, but "Versuche über Pflanzenhybriden" ("Experiments on Plant Hybridization" ) from 1866 and published in Verhandlungen des naturforschenden Vereines in Brünn (Proceedings of the Natural History Society of Brünn) is the basis of what kids in school still learn today.

At the time, the science community had little interest. He had no 'bulldog' to promote his work and even then English was gradually overtaking German as the language of science, but he primarily did not get any recognition during his lifetime because of elitism. A generation later scientists who were not competing with him and did not look at him as an outsider began to call attention to his work and it is now considered seminal.

The situation is different now. The recent paper found that available newspaper articles about his work have been digitized. We see the early thoughts on his findings that for many traits, two different Elemente available but that male and female parts of the flower form reproductive cells that only contain one and that one is transmitted to an offspring plant. That led to foundational understanding of chromosomes.

July 20th, 2022, is the 200th anniversary of his birth and biologists will raise a glass in his honor, because they are truly standing on the shoulders of a giant.
Science 2.0
More Articles All Articles
About