Robert H Olley
Do you find that your camera is not registering violet correctly?  Flowers that are more violet in appearance are coming out blue, while some purple flowers come out all right.  In the picture below, the daisy and the pansy to the right appear more or less correct while the pansies at centre and left may appear more or less “true blue” depending on which camera.  This is discussed in the YouTube Why Do Purple Flowers Photograph as Blue? (from which I extracted the picture below) and its sequel Photographing Purple Flowers with the Panasonic FZ200 - update. 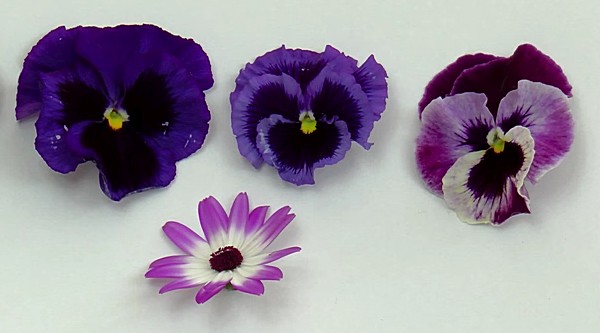 The problem arises because as the wavelength of light captured decreases and the colour changes from true blue through indigo to violet, the blue pixels in the sensor cannot take account of this fact, unlike the human trichromatic eye which seems to sense a bit of red, increasingly so with shorter wavelength.  If the flower is like the purple daisy in the picture, the sensor is receiving a mixture of red and blue, and the rendering is more or less correct, but with a pure violet flower the sensor appears to be flummoxed.

On a simple model, one could imagine the pixels working like so: 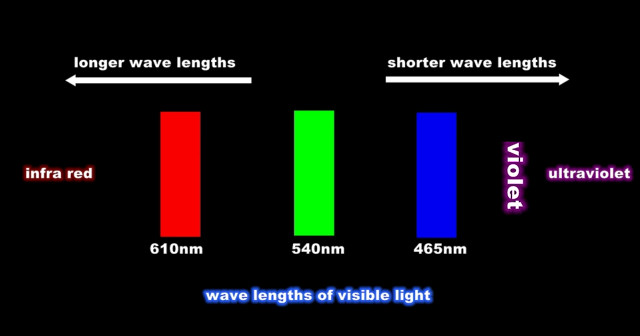 but this cannot be the case, otherwise pure sodium yellow, for example, would simply fall between the red and the green, and not be registered.  They must each register a band of wavelengths, peaking at a particular maximum.  However, this cannot take care of the perceived “rise in red” at short wavelength in human colour vision.

Many simple diagrams of the sensitivity of human cones to the range of visible light fail to give any clue to what might be going on.  However, some indicate a secondary rise in the sensitivity of the “red” cones at shorter wavelengths, called the beta-peak in the diagram below.  This diagram I have extracted with modification from an article To UV or Not UV which discusses whether or not trout have a fourth set of cones with maximum sensitivity in the near ultraviolet. 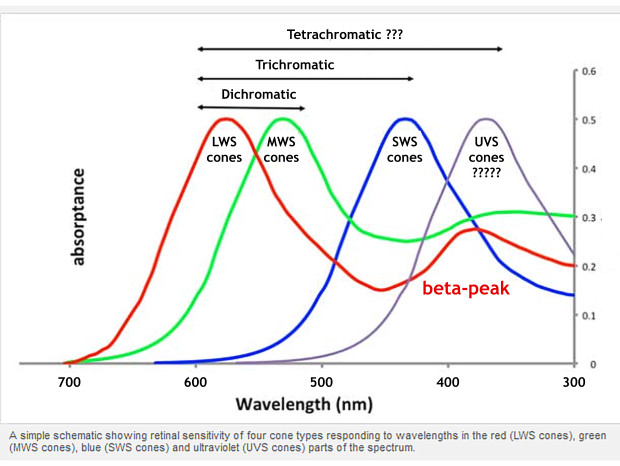 Many mammals have dichromatic vision, while most primates have trichromatic vision.  Trout are aware of UV, as anglers know, using artificial “flies” which are reflective in the UV as bait.  The article suggests that trout may only be trichromatic, and that they can see ultraviolet using the secondary peak (the beta-band or cis-peak) in sensitivity of cones maximally tuned to longer wavelengths.

It is, I would suspect, that cameras which can more effectively render violet in the output do so using clever algorithms which take account of the residual tails of green or even red present in addition to the main signal from the blue sensor.  Indeed, the a “true blue” input there would generate some response from the green pixels and possibly even a very small contribution from the red ones.  It would then be the case that the purest blue output signal from the sensor as a whole would come with the shortest., violet, wavelengths.  If the software in the camera can take account of this, the camera can render the colours reasonably close to what we humans perceive.

Historical note: many years ago I first noticed a parallel effect happening when visiting some friend swho were using the new compact fluorescent bulbs, and had on display some Venetian violet glass objects.  These appeared indigo, because bulbs of that type emit a relatively narrow band in the blue to indigo, and do not emit in the violet.
Beamlines
More Articles All Articles
About