This sounds like something from a science fiction comic when I was young, back in the days when Dan Dare was with Spacefleet, which was effectively the RAF in Space before the Russians and Americans took over.

However, this bit of news is quite contemporary.  According to one of my favourite online newspapers*, a team of German scientists claim to have discovered a “second solar system” made up of seven planets orbiting a star similar to our own.

The astrophysicists at the German Aerospace Centre (DLR or Deutsches Zentrum für Luft- und Raumfahrt) said on Monday they had discovered “the most extensive planetary system to date.”

They have found seven planets circling a star called KOI-351 – more than in other known planetary systems.

A statement on the DLR’s website said the planets were arranged in a similar fashion to our solar system with smaller rocky planets near the star and giant gas planets further away.  “Although the planetary system around KOI-351 is packed together more tightly, it provides an interesting comparison to our cosmic home.”

They believe the discovery is a “major step” towards the search for a star system similar to our own.

The star was selected from a vast list, the Kepler Input Catalog (or KIC) which is a publicly searchable database of roughly 13.2 million targets  From these are selected Kepler Objects of Interest (KOI) to be studied by the Kepler spacecraft, a good proportion of which go on to become Kepler numbered stars as in the present case, where the star system is known as the Kepler-90 system.  (To confuse matters, some planets such as Kepler-78b were detected previously by other projects and don’t have a KOI number.  However, their planets are then studied further by the Kepler spacecraft.)

And this is the system in question: 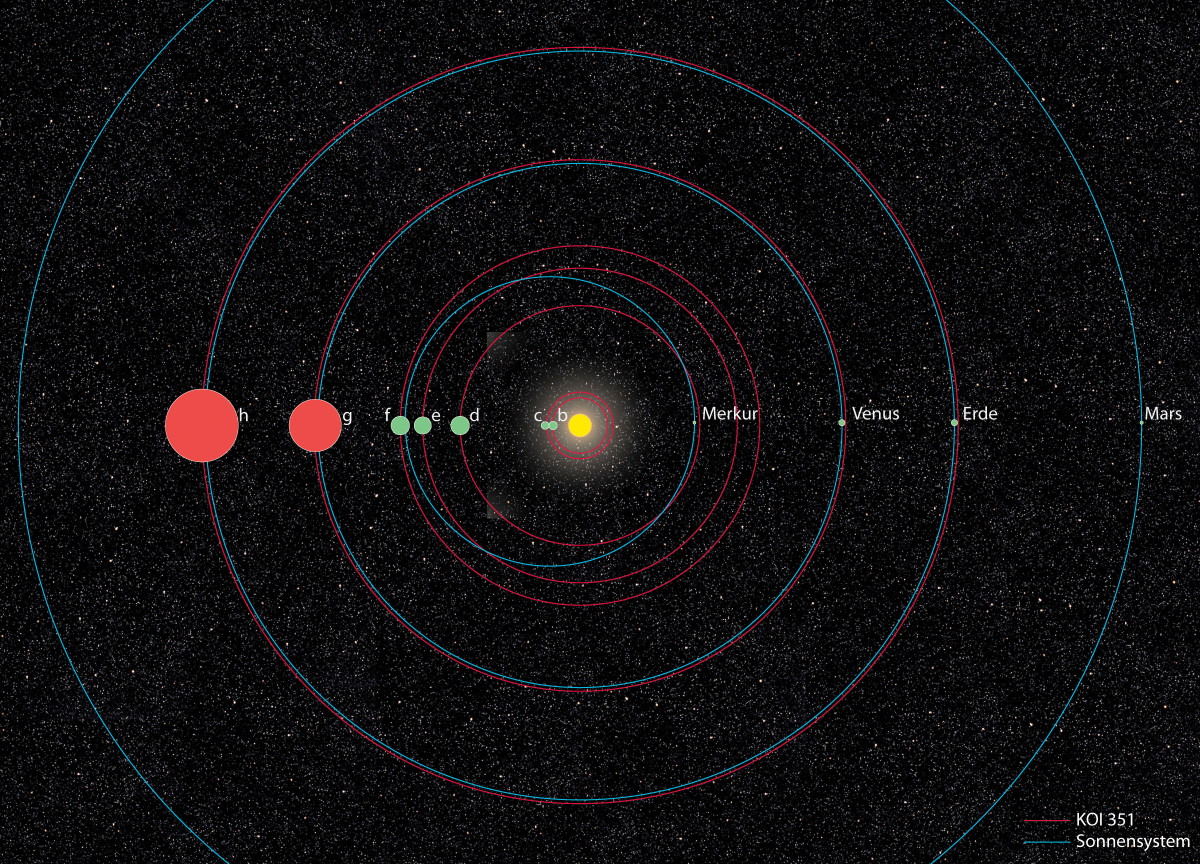 The team is led by Juan Cabrera, an astrophysicist at the DLR Institute of Planetary Research in Berlin-Adlershof.  They emphasize the similarities between KOI-351 and our solar system.

“No other planetary system shows such a similar ‘architecture’ to that of our cosmic home as does the planetary system around KOI-351,” Cabrera said.“Just as in the solar system, rocky planets with roughly the size of Earth are found close to the star, while, ‘gas giants’ similar to Jupiter and Saturn are found as you move away from the star.”

“We cannot stress just how important this discovery is.  It is a big step in the search for a ‘twin’ to the Solar System, and thus also in finding a second Earth,” he added.

Here are the planets discovered, tabulated:

Before you all go rushing off to the interstellar estate agent, it pays to read the brochure more carefully, by studying the table above.

Yes, the star itself is, as stars go, quite like the Sun, and the outermost planet is a gas giant sitting at the same radius as the Earth’s orbit.  Not that one would want to live on or in a gas giant, but it might have a nice habitable moon.

And let us look at the “small print”, the parameters of the star itself.

It has a mass 1.13 times that of the Sun, so that automatically leads one to expect that it is likely to be hotter, unless it’s a very young star.  But we do not even have that uncertainty; more precisely to the point, its radius is 1.2 Solar, so it will present to its planet 1.44 times the radiative area of our own solar disc.  And at a temperature of 5930 K, the surface will be somewhat brighter, raising its total heat output to about 60% higher than that of the Sun.  Our own Sun is slowly and inexorably getting brighter, and it is predicted by that by the time the Sun gets that hot, Earth would have undergone the “big boil”, whereby most of the oceans would have gone well over what under the Earth’s present atmospheric pressure is the boiling point of water.

And what’s more, there appear to be no known planets further out that one could move to if things get really too hot.  So one would find oneself like so many retired British expats, who have sold up here for a home in the sun, only to find themselves falling foul of local laws and corruption.


*www.thelocal.de, from which one gets news items like this: Bionic tortoise on a roll with Lego wheel