Robert H Olley
In February 1999, the giant German pharmaceutical company Bayer celebrated the centenary of the launch of ASPIRIN, the world’s most successful legal drug. One thing they did NOT celebrate is the launch of HEROIN one year earlier. 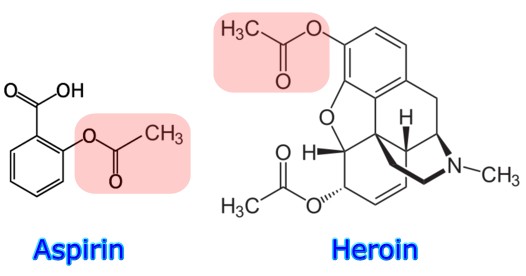 During the 19th century in Europe, first opium and then morphine were in wide use as painkillers, and a non-addictive painkiller was desperately needed. Both compounds were already know, but aspirin was the first of these two to be synthesized in a form pure enough for medicinal use, and could have been launched by Bayer in 1897. However Heinrich Dreser, the head of the testing department, had already tested the stronger heroin on himself as well as some of the workers, who said it made them feel HEROIC (hence the name). Realizing the commercial potential of “his” drug, he rejected aspirin on the grounds that it would “weaken the heart”. The company then launched heroin, not so much as a painkiller, but as a cough remedy. Even at the end of the 19th century, tuberculosis and pneumonia were common, and severely ill patients desperately needed something that would give them a night’s sleep.

However, trouble was developing. Even one year later, some patients were showing “tolerance” to the drug, and the commercially aware Dreser took the warning and began to support aspirin. As time moved into the early years of the 20th century, recreational use and addiction became increasingly common. The slang term for a drug addict - a JUNKIE - comes from those who collected and sold scrap metal to finance their habit. In 1913, Bayer stopped marketing heroin, while aspirin has gone from strength to strength. After the Second World War, aspirin for a time fell slightly out of favour, partly because of damage to the stomach suffered by people taking overdoses. But it has regained its popularity, especially since the discovery that it can help to prevent heart attacks or strokes.

As for Dreser himself, his health deteriorated, and he died in 1924 of a stroke. He had apparently become addicted to heroin which he was using to treat his discomfort. If so, he chose the wrong painkiller: had he chosen aspirin, instead of his failed “wonder drug”, he might have lived longer.

So what is drug number three?  Alcohol, naturally!  And why do people drink alcohol?  In When we have Faces by C.S.Lewis, Queen Orual observed that it makes men feel heroic. (Perhaps that’s what gets some people started on heroin.)

I think Will Fyffe would have agreed with that.  As in the song he composed “I belong to Glasgow”:

You can see him singing it here on youtube.


And remember! The Bible wouldnae deny the workin' man his drink!

There is controversy over who actually discovered aspirin, see Wikipedia biographies of Arthur
Eichengrün and Felix Hoffmann.  There’s also a slightly racier account of the aspirin versus heroin story, but appearing on the web some years after my own account.
Beamlines
More Articles All Articles
About