Oliver Knevitt
Every friday from now on I'm going to pick out a cool fossil and stick it here. It's not necessarily going to be from the recent literature, and I'm an invertebrate paleontologist, so don't expect many T. rexes or any other overhyped big silly things with teeth! This idea is admittedly a blatant steal from PZ Myers' Monday Metazoan but, hey, I'm sure he'll get over it. Besides, mine's on Fridays, and his is on Mondays.

To start of with, I'm also going to step on the toes of Kevin Schindler of Suite 101, because this week's fossil is the Tully monster (Tullimonstrum gregarium), which happens to be the state fossil of Illinois (he's doing a series on state fossils). 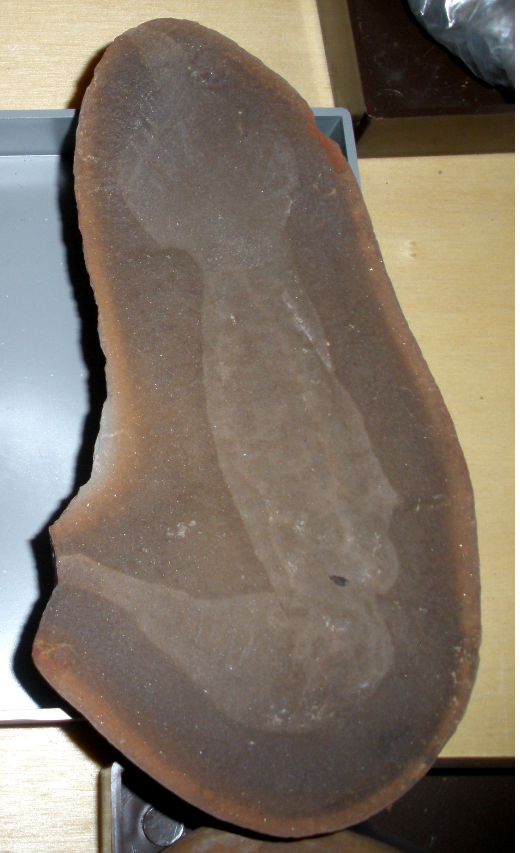 The tully monster could also be a candidate for one of the weirdest fossils ever to be found. When an amateur collector found it 50 years ago, paleontologists were dumbstruck as to what it could be, and the situation still hasn't changed today. This is in spite of many, many exceptionally preserved Tully fossils being found. We're pretty sure that it's an animal, but that's as far as it goes.

It's thought to look like a comically fat worm with a bizarre elephant-trunk like probocis with a pincer on the end:

Such weird curiosities as the Tully monster are a real pain in the arse, because they are effectively useless to paleontologists. Because we can't neatly place it in a convenient stem group, it tells us absolutely nothing about the evolution of anything. It might as well be plonked in the fossil record by a martian. The policy is basically: quietly ignore it and move on!

Thankfully, it is restricted to the state of Illinois where it can't bother us, albeit with great profusion. But if ye be traveling through Illinois... Mark Purnell has told me that he is still haunted by the time that he was driving through Illinois and, as if in a dream, a 20ft long Tully monster was eerily cruising along beside him, as if to mock him for our utter ignorance it's affinity.

The tully monster was emblazoned on the side of a truck, being as it is the state fossil of Illinois.
Between Death and Data
More Articles All Articles
About