From trilobites to tyrannosaurs, most fossils are of creatures with hard shells or bones. These materials don’t easily biodegrade and sediment has time to build up around them and turn them into a record of the creature that is still with us millions of years after it has died. Soft-bodied organisms like worms, on the other hand, decay rapidly and their fossil record is decidedly patchy.

In exceptional circumstances, however, their remains are preserved and sometimes in the most unusual places. With the right detective skills, palaeontologists can use such discoveries to open up whole new windows on the history of life on Earth. A recent discovery found in 50-million-year-old rocks from Antarctica has yielded a particularly incredible example: fossilised worm sperm.

It’s a great reminder that there are far stranger fossils out there than dinosaur bones. Here are some of the most bizarre specimens ever found. This remarkable find of fossilised spermatozoa from a clitellate or “collared” worm represents the oldest animal sperm ever discovered, beating the previous record holder – springtail sperm found in Baltic amber – by at least ten million years.

The sperm preservation was made possible because such worms reproduce by releasing their eggs and sperm into protective cocoons. In this case, a tough shell kept the cocoons intact until scientists discovered them in shallow marine gravels on the Antarctic Peninsula. Even then, it required high-powered microscopic analysis for the sperm to be spotted.

The sperm most resemble those of a leech-like group of worms that attach themselves to crayfish, even though today these live only in the northern hemisphere. But the researchers think the technique could be applied to other cocoon fossils, and help us learn more about previously cryptic creatures. If 50-million-year-old spermatozoa are surprising, what about a 425-million-year-old penis? Discovered in a ditch near the Anglo-Welsh border in the early 2000s, a tiny ostracod, or seed shrimp, proved to be quite clearly male. Preserved in three-dimensions with all its soft tissues fossilised, it was proportionally well-endowed. “Old Todger” was the headline in the The Sun newspaper.

During the Silurian period (443-419 million years ago), the Welsh borderlands lay on the shelf of a tropical sea. Marine animals were occasionally smothered, entombed and petrified by the ash of distant volcanoes.

The ostracod – and countless other small fossils – cannot be seen adequately using microscopes, however, so their mineral tomb has to be gradually ground away and the fossil recreated with 3D digital imaging. The notion that where there’s muck there’s brass is perhaps best shown by coprolites: petrified dung that can be found in many palaeontological shops. Beyond the novelty, such specimens are “trace fossils” of tremendous palaeoecological value. This means they can tell scientists precisely what an extinct creature was eating.

Coprolites are actually just one element of a richer broth, that of bromalites or “stink rocks”. The term was coined in the early 1990s to encompass all matter of excreta preserved in the rock record, and in the last few years, bromalites have been popping up everywhere.

In Australia, they show that Cretaceous plesiosaurs were bottom feeders. In Poland the regurgitated dinners of shell-crushing fish help us work out how life recovered from the biggest mass extinction in Earth history. And in Jurassic shales from Peterborough and Whitby, pavements of squid-like belemnites have been interpreted as ichthyosaur vomit. 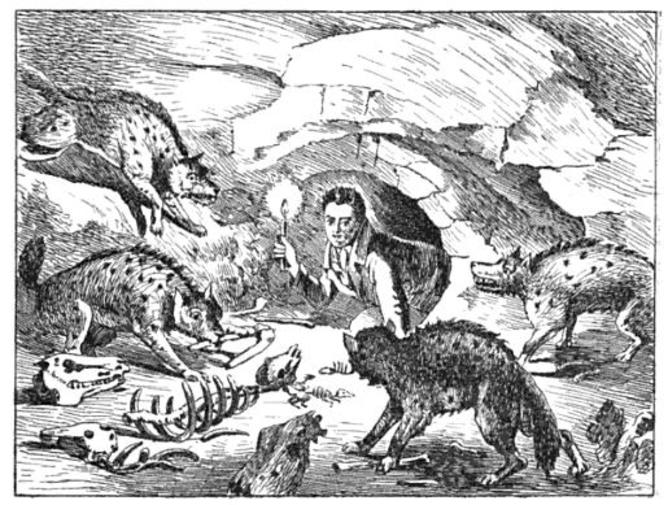 Buckland in the hyena’s cave

One very odd fossil discovery was made in Kirkdale Cave, near Kirkbymoorside, North Yorkshire in 1821. Workman quarrying for roadstone found a cliffside hollow full of large animal bones. They were at first thought to be cattle, but a local naturalist saw that they were more exotic-looking, and the remains eventually made their way to Oxford University’s Professor William Buckland.

A man who claimed to have eaten his way through the entire animal kingdom, Buckland was the most marvellous experimental scientist. He recognised that the bones were mainly of large herbivores, such as elephants and rhinos. They showed signs of having been gnawed, and fossilised faeces found on the cave floor resembled those of hyaenas.

Conveniently being in possession of one as a pet, Buckland proved Kirkdale Cave had been a hyaena den, and founded the science of palaeoecology. Almost two hundred years on, we know that “African” megafauna roamed the Vale of Pickering about 125,000 years ago, in a warm phase between ice ages. The fossils of Mazon Creek in Illinois, USA, were first encountered during coal mining in the 19th Century. But it wasn’t until the 1950s that the site became fossiliferously famous, thanks to Francis Tully’s discovery of an exceptionally weird beast: a beautifully preserved soft-bodied animal revealed in a naturally split mineral nodule.

Specimens turned out to be quite abundant but unique to Mazon Creek, and the beast was given the name of Tullimonstrum gregarium. It is now the state fossil of Illinois. Trouble is, no-one knows what Mr Tully’s Common Monster really is. A few inches long, it has a long snout with toothy pincers at the end, two eyes on stalks, a segmented body, and a finned tail. It was probably a predator, and the rocks it was found in suggest that it lived in tropical, shallow seas.

Beyond that, after more than half a century, we’re not much the wiser. It cannot be satisfactorily united with any other invertebrate group, living or extinct. Even with exceptional preservation, the fossil record always has the capacity to surprise.

Liam Herringshaw is Lecturer in Geology&Physical Geography at University of Hull. This article was originally published on The Conversation. Read the original article.