Home > Archaeology > Between Death and Data

That was my first reaction to finding out that the University of Leicester (where I am based) was about to commence an archaeological dig to uncover the bones of Richard III.

But, a press conference this morning has showed be to be totally wrong - or at least, woefully pessimistic. Because, it seems that a team of archeaologists has uncovered some bones that are indeed very likely to have been Richard III's.

The chances were remote. Leicester has been continuously inhabited since the stone ages, so generation after generation of inhabitants have torn down what was there before and built over. So the humble church that the last Plantagenet King of England's remains were rumored to have been buried in were likely to have been vestigial; at worst, gone completely. So, funding any project to search for his remains would be like putting millions of pounds on a horse with a broken leg.

But, as has been proved this morning, it was worth that risk.

Most media corporations were at the press conference, so I expect that there will be some comprehensive reports by them soon on this discovery. But I thought I would briefly write something up, basically because I cannot get enough of this stuff. I'm also aware that a lot of readers are american, so may not know much about Richard III.

Richard III is essentially seen as a pantomime villain. The character that most people are familiar with is the Richard III as portrayed by Shakespeare. A dark, brooding, malevolent character that is both machiavellian and destructive. He is murderous and callous, petty and calculating. He had a hunched back and a withered hand. He murdered his nephews, the princes in the tower. He got his crown by cold blooded murder. He poisoned his wife. And the list goes on.

Richard's history, however, was written by the victors. Richard was the last Plantagenet King of England, and he was defeated at the Battle of Bosworth by the Tudors. The Tudor dynasty lasted for a long time, including Henry VII, Henry VIII, Mary, and Elizabeth. Consequently, he was mythologized as a tyrant, particularly by Shakespeare, writing during Elizabeth's reign. Horrible Histories capture it perfectly here.

Richard, then, is an enigma. He was clearly not the caricature that Shakespeare portrayed him as. The Richard III society recognized this, and have had a long dream of exonerating Richard.

This is a clear case of not being able to rely on the history books. What is need is bones.

So, this is precisely what a team from Leicester set out to do. There are some reliable documents that state that after Richard was killed at Bosworth, his corpse was buried in a humble Leicester Greyfriars Church, in the priory.

The team then set out to find these remains. There was a reasonable chance that the church, long destroyed was situated under a car park, belonging to the county council. And really, it snowballed from there.

In their first trench, the team uncovered the remains of the wall of the church. Here's the site, as I saw it last week. 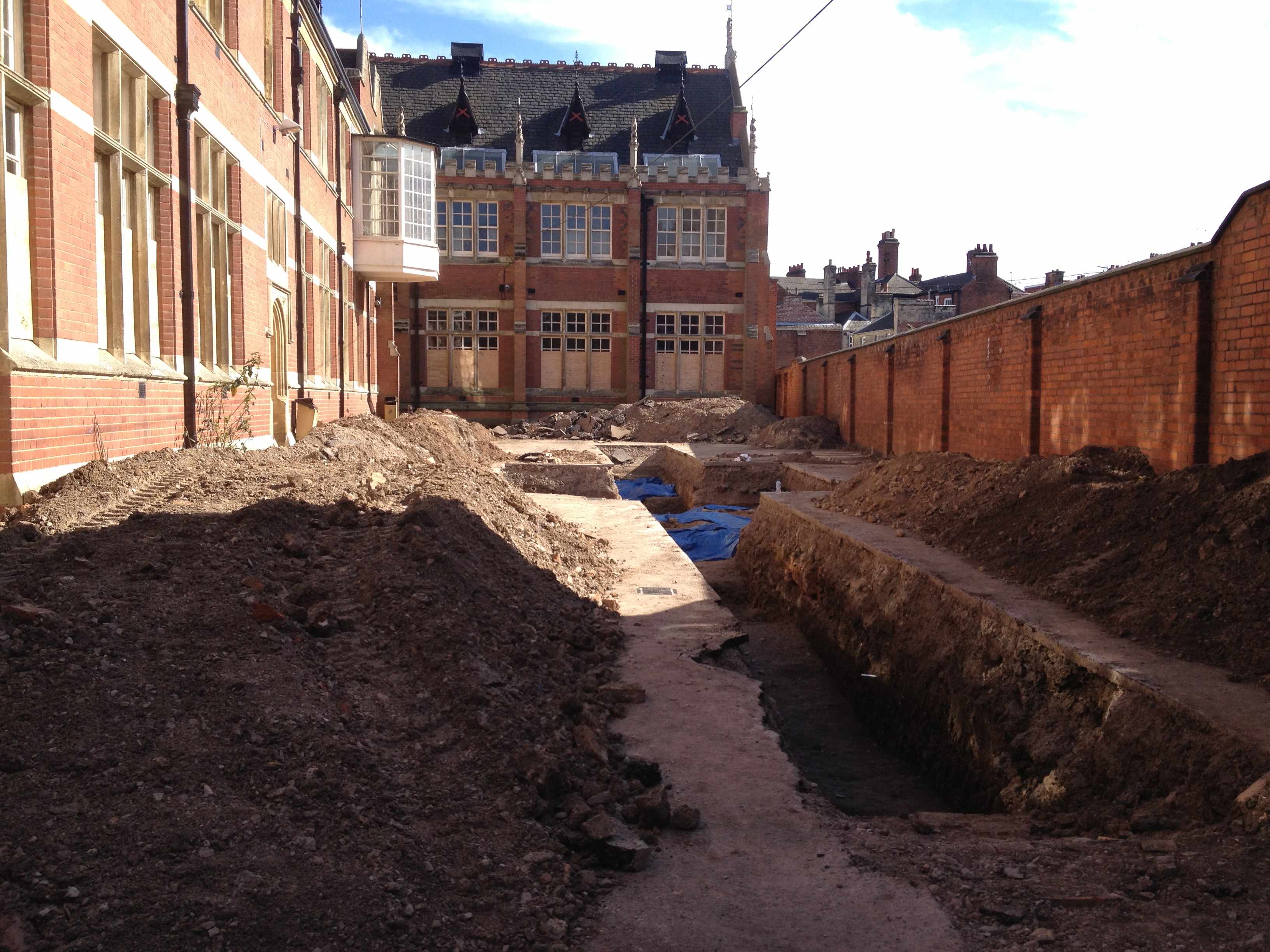 With a further trench, they uncovered the facing wall. Here are some artefacts,

What may be the east window of the Church. Courtesy UoL

A stone frieze, which may be from the Choir stall. Courtesy UoL

They were able to produce a map of the church, which I've reproduced below. Again, map is courtesy of the UoL.

So far so good then. Here comes the next interesting thing. The father of Christopher Wren visted someone called Richard Herrick in the 1600s, who had a lovely garden. In his garden, he had a big stone memorial saying "Here lies Richard III, King of England".

So, now things are looking good. The team are looking for Richard's remains in exactly the location where he was described as being buried.

Then the team found some human remains. No photos have been released for sensitive reasons. One of these skeletons was a female's, and was also rather fragmented, so clearly that's not him. This was found in the presbytery.

However, on September 6th; just a couple of days ago, another, fully articulated skeleton was found here. It belonged to an adult male in his 30s, and was found in the choir area.

The location alone is immensely important.  John Rous, reports that Richard ”at last was buried in the choir of the Friars Minor at Leicester”.

Closer analysis revealed some more intriguiging details. Firstly, this individual has suffered several blows to the head, one by a bladed instrument. A contemporary account describes Richard as being killed by a pole axe by a Welshman. Certainly the individual was likely to have been killed in battle, as Richard was.

Secondly, a barbed arrow was found, lodged in the back of the skeleton. It was not embedded in the spine itself, so wouldn't have been fatal but certainly nearby enough to have caused severe trauma.

Thirdly - and perhaps most compellingly - the individual was found to be a sufferer of coleosis. I mentioned above that many subsequent historians described Richard as being deformed. Well, this condition, though not giving a true hunchback, caused the individual's right shoulder to droop.

There you have it. We have an individual, of exactly Richard's age and physical condition, that seems to have died in the same circumstances as Richard, and was buried in the place that Richard is said to have been buried in. The chances are that Leicester have indeed found the remains of Richard the III.

It doesn't end there. Luckily, the skeleton is in such a good state that there is a reasonable chance that DNA can be extracted from it. A genealologist has identified a direct maternal descendant, Michael Ebsen, who now lives in Canada, who this skeleton's DNA will be compared with.

Instead of looking at nuclear DNA, the team will instead look at mitochondrial DNA. This has many advantages. Firstly, mtDNA is transferred maternally, and we have a direct maternal heir in Michael Ebsen. But also, mtDNA is much more resistant to decay than nuclear DNA, and so there is a reasonable chance that a complete genome can be sequenced. The results will be out in around 12 weeks, so we have that to look forward to.

While listening to the press conference this morning, I was completely blown away. Such a finding is completely unexpected, and need I say it, extremely lucky.

It's tempting to use cliches like "worth every penny" in describing the decision to fund projects like this. However, in doing so it is impossible not to use that word: worth. How do you place the worth of a research project? Is the study worthless if the results are negative?

I recently held an interview with Sir Alec Jeffreys, the discoverer of DNA fingerprinting, for a research magazine I'm involved in. In his long career, he has never been refused funding. Not once. But he bemoans the proliferation of "safe" research, such as big statistical studies, which he has always avoided. Yes, there is a place for applied research. But there seems to be an increasing difficulty in funding research that takes large risks, or using highly unconventional techniques. Much of the time, they draw blanks. But just occasionally, they pay off. Bigtime.

This is why this sort of research - and this sort of result - makes me very happy. Yes, it's easy to say with hindsight that this is exactly the sort of research that we should be funding. But that, of course is the wisdom of hindsight. In reality, this is the complete opposite of "safe research". It's normally difficult to find funding for projects that are unlikely to see any return; that rely on a chance finding. And this just vindicates taking the risk completely; for all of us.

As Phillippa Langley of the Richard III society said earlier today, "If you have a dream, fight for it"