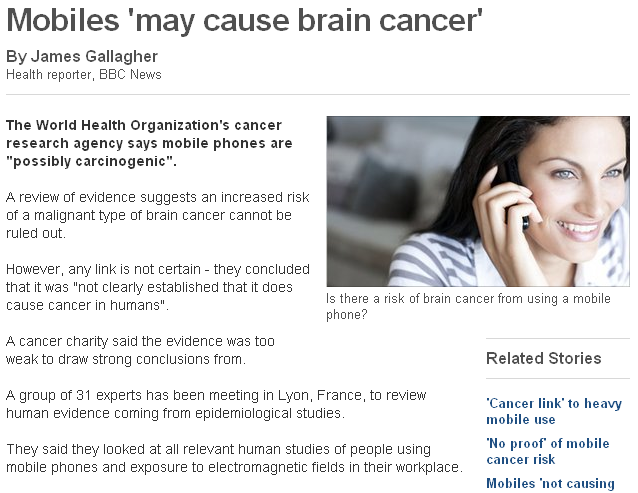 ...would you take a step back and think, "Is this really what my facts are telling me?" Because, if they don't, consider your position as a self-styled centre for top quality journalism, and don't publish misleading, irresponsible things like this.

And please, don't adopt the Daily mail tactic of putting a caveat halfway down the page. Or in this case, literally in the second paragraph,

However, any link is not certain - they concluded that it was "not clearly established that it does cause cancer in humans".

A cancer charity said the evidence was too weak to draw strong conclusions from.

Ed Yong, head of health information at Cancer Research UK, said: "The WHO's verdict means that there is some evidence linking mobile phones to cancer but it is too weak to draw strong conclusions from.

I forgot to credit this: its from the excellent SMBC.

And while you're at it, write some proper headlines; not just using faux quotations; "Innocuous object 'may imply something it blatantly doesn't' "! You're better than this.

The Guardian have also taken this rather reactionary line, though with a less misleading title (Mobile phone use is a possible cancer risk, rather than Mobile phones may cause cancer - something subtle, but important). With a longer article, we can get a bit more background,

Jonathan Samet, a scientist at the University of Southern California, who chaired the group, said: "The conclusion means that there could be some risk, and therefore we need to keep a close watch for a link between cellphones and cancer."

In designating radio-frequency fields as "possibly carcinogenic", the WHO has put them on a par with around 240 other agents for which evidence of harm is uncertain, including low-level magnetic fields, talcum powder and working in a dry cleaners.

The report found no clear mechanism for the waves to cause brain tumours. Radiation from mobile phones is too weak to cause cancer by breaking DNA, leading scientists to suspect other, more indirect routes.

"We found some threads of evidence telling us how cancers might occur but there are acknowledged gaps and uncertainties," Samet said.

There is a much better article at Cancer Research. Compare this with the BBC report and laugh, 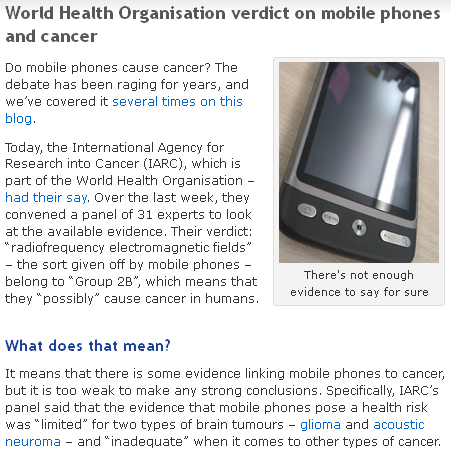 Group 2B – this is the one that mobile phones now fall under – means something is “possibly carcinogenic to humans”. It means there is “limited evidence” that something causes cancer in people, and even the evidence from animal studies is “less than sufficient”. Group 2B means that there is some evidence for a risk but it’s not that convincing. This group ends up being a bit of a catch-all category, and includes everything from carpentry to chloroform.