Home > Atmospheric > Between Death and Data

Oliver Knevitt
Before discussing the conclusions of this paper released this week, I'll start with a pub-quiz style question. How much of Earth's atmosphere has not been made by living things?

The answer is: less than 1%, which is mostly argon. The overwhelming majority is biogenic; the nitrogen is a product of denitrifying bacteria, the oxygen from plants, and the inconspicuous CO2 is produced by everything, but especially animals.

So, would an alien astronomer look at a spectrum of Earth, see this cocktail of gases, and think, "Hmmm. Clearly this planet is harbouring life?" The chances are that they would. Earth looks decidedly odd from a distance. It would show a combination of a water-rich atmosphere, combined with a strong ozone absorption; this ozone peak is basically a proxy for oxygen, and its presence implies a continuous biological source of oxygen - especially in combination with reduced species such as methane, nitrous oxide, and methyl chloride. Without being replenished, oxygen rapidly removes itself by reacting with other gases and things on the Earth (you should see my brother's car!). 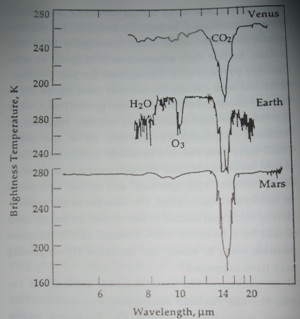 From Hanel et al 1975, Exploration of the Solar System by infrared imaging. Apologies for the poor quality photo of a textbook.

The problem is, oxygen can also be produced by non-biological processes, and moreover, life doesn't necessarily produce oxygen anyway. In fact, life got on pretty much fine for a long period of time without oxygen before it was released en masse, in what you could call the greatest mass pollution event in Earth's history. So long lived was this period that we might expect most alien life supporting planets to be harbouring single celled ETs.

So instead, there is a hunt for another signature of life that we can use in our hunt for extraterrestrial life. A possibility is methane, but then this can be produced geothermally from the breakdown of certain rocks. Similarly, hydrogen sulphide can be biogenic, but it is also belched in large amount during volcanism.

However, there are a few promising candidates to be found in a few biogenic sulphurous gases that have bonds between methyl groups and sulphur, which is what Domagal-Goldman et al. have focused on. These are methanethiol, dimethyl sulphide, and dimethyl disulphide. On Earth, they are rapidly broken down in the presense of atmospheric oxygen, but of course, without this oxygen, we might expect their levels to climb.

Domagal-Goldman et al. fed these chemicals into a model of the atmosphere based on what we know about the archaean period on Earth. As our only example of what an anoxic planet's ecosystems are like, this is a fundamental datapoint on which we base our calculations. So, the primary productivity of sulphur consumers is matched to that on Archean Earth, whose estimates vary between 5 x 109 mol S/year 2 x 1014 mol S/year. We also have to keep in mind that things may been different on extrasolar planets; for example, the CH3SH production rate could be higher if the planet has larger volcanic H2S flux rates. It's also difficult to parametrise the effect that clouds of these organic sulphurous particles would have optically.

Earth in the archaean

But anyway, caveats, shmaveats, lets skip that bit and get to the juicy results. The interesting thing is that we get a very distinct signature from planets in the habitable zone, because they are bombarded with proportionally fewer UV photons and more long-wavelength, low-energy photons, leading to lower photolysis rates. The only other sink of our biogenic compounds is reaction with radicals such as OH and O, which are themselves actaully by-products of photochemical reactions anyway - so this change in UV is key.

Because of this effect, dimethyl sulfide and dimethyl disulfide concentrations can only increase to remotely detectable levels on planets with extremely low UV fluxes. Here the star is key; the habitable zone of an inactive M dwarf would do the trick nicely here. In this image, planets orbiting stars with greater UV radiation are on the left and planets with higher biological Sorg production are on the right. You get a better mixed atmosphere for planets with greater production with a lower UV star.

Here's the crucial bit, though. Do these constitute a distinctive signal? As it happens, I'm currently working on an infrared spectrum of a fossil that I'm working on, and (irritatingly) not all bonds that you might be interested in are spectrally active. The proof is in the pudding, so here is that pudding:

The one to look at is the black line in the bottom two spectra. As it happens, the most readily detectable signature seems to be ethane. Ethane is not directly produced biologically (even though it can be), its actually produced as the bi-product of CH3 radicals produced by photolysis. Even though photolysis provides the feedstock though, photolysis still affects ethane, so it still relies on fairly low UV levels. Atmospheres could create ethane from methane abiogenically, however, atmospheres that have created ethane in this way also exhibit a detectable increase in the CH4 concentrations in the atmosphere. So, really, it is the C2H6/CH4 ratio that is the true signature of an anoxic, living planet*.

By searching for this, we could detect a living planet around a star like the sun as long as it had biology that produced Sorg fluxes at 30 times modern-day levels, because the UV spoils it. This is certainly possible for planets that are anoxic only anyway. But on planets around less-UV intense M dwarf stars such as AD Leo, we could even detect a living planet producing similar amounts of Sorg as Earth does.

The good news is that all we need to detect this is an instrument with a spectral resolution R > 20, broad coverage of the IR spectrum (6-14 um), and low total noise levels (S/
N> 15 or noise < 1W/m2/um) - which we do. So, we just need to start looking at those spectra!

Its been released ahead of print, so for the lucky ones only:

Domagal-Goldman, Shawn D., Victoria S. Meadows, Mark W. Claire, and James F. Kasting. 2011. “Using Biogenic Sulfur Gases as Remotely Detectable Biosignatures on Anoxic Planets.” Astrobiology (June): 110610070156052.   -Not available-, ahead of print doi:10.1089/ast.2010.0509
*There is just a bit of an annoying knock-on effect. The Sorg gases all absorb in a particular band known as the ‘‘atmospheric window’’; the region most transparent to the IR radiation emitted by the surface of Earth. So, discriminating between planets with absorption by Sorg species and planets with lower surface temperatures may prove problematic. But this is something that we may be able to deconvolve using models.
Between Death and Data
More Articles All Articles
About