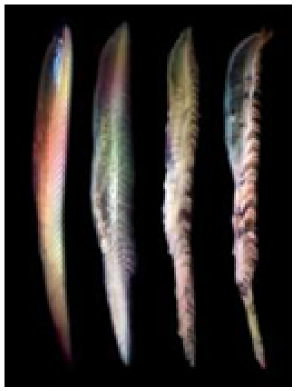 Is the lack of complex anatomical features in fossils of primitive vertebrates absence of evidence or evidence of absence? And how would we tell? Hoping to answer this, a team of palaeontologists at the University of Leicester, UK, have set out to do the seemingly impossible: place error bars on the interpretations of simple vertebrate fossils, by studying the decay of modern simple vertebrate animals. The result, from work carried throughout the year, had slightly embarrassing implications for our former interpretations of primitive vertebrates and has forced a paradigm shift in the way we interpret such fossils.

For my first blog post, I thought I'd write about some research that's been taking place at the university that I'm based at (the University of Leicester in the UK) of which I've come in at the tail end of. Its therefore a bit conceited to call it the "Paleontology Highlight of 2010" (!), but I still think that it's had some of the greatest rammifications of any study published in the last year.

The vast majority of fossils in the fossil record are of hard shelly things; this is not surprising when you consider walking down a beach and see it strewn with countless shells, the soft parts of which were eaten away days after death. However, in rare cases, we do preserve soft bodied parts, and often in a spectacular way; many are familiar with the Cambrian Burgess shale, where 98% of the fossils are of soft-bodied animals. Such rare occurrences are our only direct glimpse into a whole world of soft bodied animals that we are generally ignorant of in palaeontology. Most of our understanding of the evolution of primitive vertebrates comes from analysis of rare soft body fossils, such as Metaspriggina, Pikaia, and Cathaymyrus. We accept that such fossils are incomplete, but the question is, how incomplete? Many of these organisms are reconstructed as being simple and lancelet-like, but how can we be sure that this organism was actually very complex, but with all of the complex parts having decayed away before they could be fossilized?

Attempts to constrain the original morphology of the fossil organism in question have been made by making comparisons with the observed decay of modern organisms. In an ongoing study, Rob Sansom and others at the University of Leicester watched fish rot every day for over 200 days, and, uniquely for such an experimental study, noted the relative timings of the loss of anatomical features. Although thoroughly unpleasant (I have been an unwilling visitor to this lab; it’s in a basement and the smell really is chokingly pungent, meaning Rob doesn’t get many visitors), the ramifications of this study have been wide, casting doubt on the interpretations of many early vertebrates. 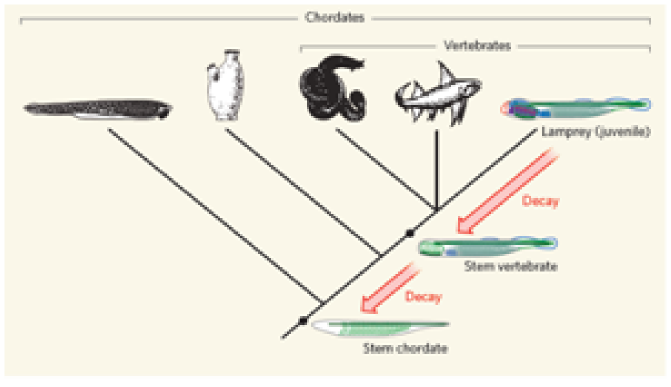 Somewhat perversely, the most derived features of the organism decayed first, i.e. the eyes and the skull, followed by the next most derived, and so on and so on, until only the most primitive parts of the organism, the notochord and the muscle blocks, are left. You can see this in the diagram below. The upshot of this is that as an organism decays, it appears to slip from its position within the crown of a phylogenetic tree towards more lowly positions, a phenomenon that the team dubbed “stemwards slippage” (shown in the diagram to the left). 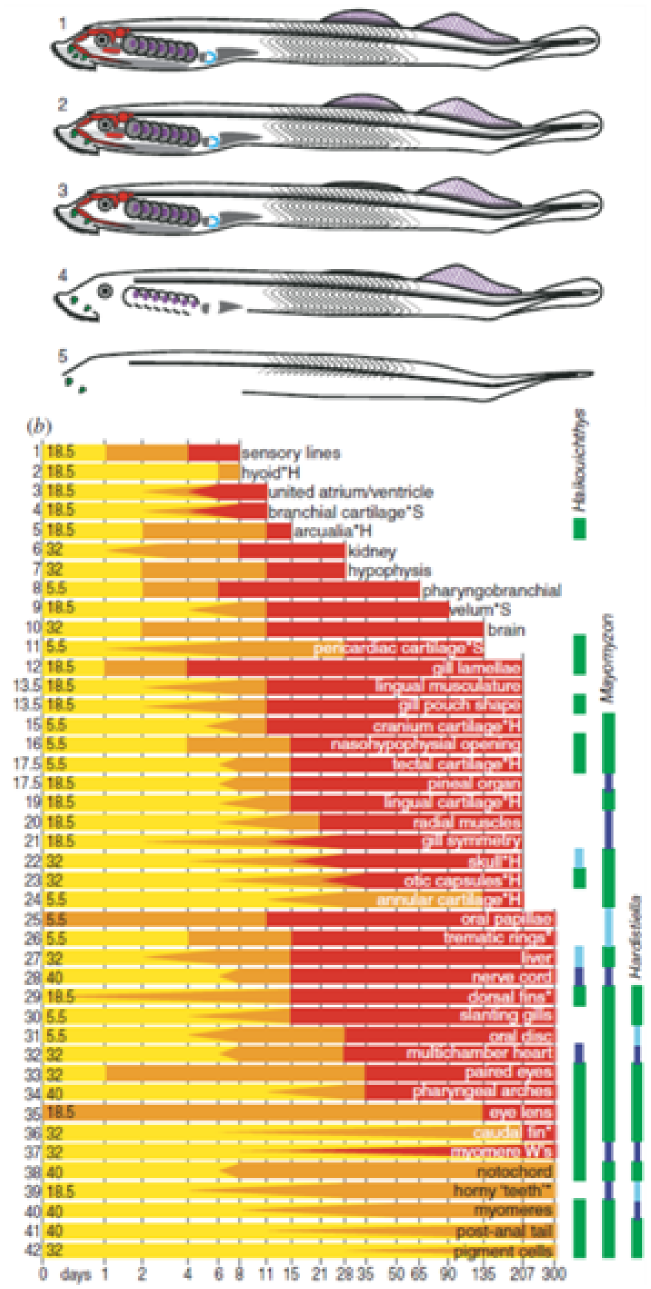 This study has forced palaeontologists to rethink their interpretations of supposed early vertebrate fossils. “There are undoubtedly fossils that have been over interpreted,” explains Mark Purnell. "In some organisms that have been interpreted, there has been way too much speculation and the data have been extended beyond what is scientifically acceptable." Phil Donoghue of the University of Bristol stated that "…it's certainly going to annoy a lot of palaeontologists who have rather blithely interpreted fossils.” He went so far to say that, “A bunch of fossils we thought were primitive vertebrates actually now fall into a dustbin and tell us nothing about the evolution of vertebrate characters."

A couple of these fossils in for the chop are Mayomyzon and Hardistiella, both formerly interpreted as fossil stem group lampreys but should be rightly placed within total-group petromyzontids, as illustrated in the figure. There are undoubtedly other purported stem vertebrates sitting in drawers around the world that need to be re-examined in the light of this data. Moreover, this study shows that in many cases, comparison of a fossil with a pristine living specimen is deeply flawed.

Although this result might seem like a spectacular own goal for paleontology, this study in fact has many positive consequences. Most importantly, it goes some way of being able to put error bars on our interpretation of soft bodied fossils. For instance, because of the specific characters preserved in Haikouichthys, we can be rest assured that it is indeed a stem vertebrate (specifically because of its anomalous lack of a skull with the concomitant survival of other derived traits). Derek Briggs, the doyen of palaeontologists and an expert in experimental taphonomy experiments, concluded that "[This study places] important constraints on the interpretation of rare fossils, including some of our earliest ancestors,” adding that these results “…can be applied to the interpretation of soft-bodied fossils in general, and particularly to determining their true place in the tree of life."

---------
Citations: Sansom, R. S, S. E Gabbott, and M. A Purnell. “Decay of vertebrate characters in hagfish and lamprey (Cyclostomata) and the implications for the vertebrate fossil record.” Proceedings of the Royal Society B: Biological Sciences (2010).
and the Nature letter from earlier this year: Sansom, Robert S., Sarah E. Gabbott, and Mark A. Purnell. “Non-random decay of chordate characters causes bias in fossil interpretation.” Nature 463, no. 7282 (February 11, 2010): 797-800.