Chris Mooney, author of Unscientific America: How Scientific Illiteracy Threatens our Future, has a new book, The Republican Brain: The Science of Why They Don't Believe in Science, in which he describes how firmly some of our neighbors - even moderately well-educated ones - (and not just Republicans) - now cling to aphorisms, assertions and just-so stories in order to clutch a politically motivated view - or mis-view - of scientific data.  Misinformation persists – and propagates – about the dangers of vaccinations, the hazards of nuclear energy, the credibility of creation vs. evolution, and the preponderance of data supporting global warming. In case after politically-redolent case, we find that evidence has a limited power to persuade on hot button issues where deep emotions are involved.

I agree with Mooney that this delusion-conviction effect has done grievous harm to our once-scientific and rational nation. Still, I have some interesting quibbles that we'll get to in a bit. 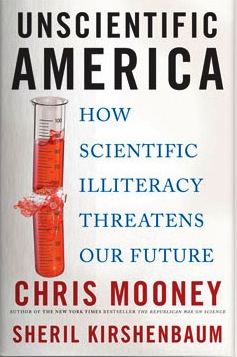 Mooney describes in detail how bad it is - that millions of our neighbors deem facts to be malleably ignorable. For example, though soundly refuted by scientific studies, angry parents continue to believe their children acquired autism through vaccinations: "Where do they get their 'science' from? From the Internet, celebrities, other frantic-angry parents, and a few non-mainstream researchers and doctors who continue to challenge the scientific consensus, all of which forms a self-reinforcing echo chamber of misinformation," writes Mooney, noting that for every five hours of cable news, just one minute is devoted to science. In 2009, 15 year old U.S. students ranked 17th out of 34 developed countries in science. A firm foundation in science is fundamental to modern citizenship as well as our ability to innovate and succeed in a global economy.

In fact, the “war on science” has ballooned long past any mere attack upon the credibility of researchers and professors.  It now manifests as a general “war on all knowledge castes” -- including teachers, economists, journalists, civil servants, medical doctors, skilled labor, judges, diplomats... everyone (in other words) who actually knows a lot. All kinds of well-educated smartypants-types are routinely attacked on certain "news"-networks. (Go ahead and name an exception; there are two, but can you think of them?) 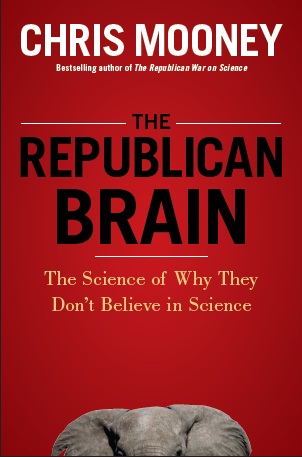 Science itself is turning attention to this problem and things are not looking good.  According to one study (via Mooney): “The result was stunning and alarming. The standard view that knowing more science, or being better at mathematical reasoning, ought to make you more accepting of mainstream climate science simply crashed and burned.” It was found that conservatives who knew more tended to dig in their heels against new facts or budging their views, using what they already knew as bulwarks against changing their minds.

This did not hold for the other side. Educated liberals who were pre-disposed to be suspicious toward nuclear power nevertheless were adaptable when shown clear scientific data assuaging their fears.

(While it is true that liberals pas this test re nuclear power and several other issues. Still,I would love to see this experiment done on liberals re: nature-vs-nurture issues!  See below.)

Mooney concludes that even education fails to serve as “antidote to politically biased reasoning.”

Take a look at this excerpt of Mooney's latest book, The Republican Brain: The Science of Why They Deny Science—and Reality (due out in April). It shows that our current Culture War is not about left vs right at all.  It is about two very different sets of personalities and worldviews.

Naturally, the War on Science is not something that even Fox admits to be waging. Indeed, the claim has long been made - by among others the late sci fi author Michael Crichton - that it is scientists themselves who are betraying the fundamental ethos and principles of their calling,  For example, Crichton... and later many other apologists of the far right... denounced the very notion of "scientific consensus," claiming that the term represents a foul practice - scientists voting on what is true, or meekly accepting a single paradigm in any field, harrying and persecuting any who question or dissent against the standard theory. This has proved a powerful polemical tool, because modern citizens know that this would be wrong - a travestry-treason against science itself.  That is, if scientists were doing that.

Indeed, there have been cases where it happened. These examples of group-think compliance or bullying by tenured savants are taught to young scientists - as examples of how it should not be done.

And that's the point! "Scientific consensus" is used as a convenient button-phrase, a nostrum to attack scientists by proclaiming that they aren't objective, but lemming-like creatures, clustering around chanted litanies while conniving together in search of measly $50,000 grants. How ironic an example of the "mirror effect," in which partisans making an accusation perceive their enemies as having their own primary traits.

In fact, scientists are the most competitive and creative our species ever produced.  They go at each other like fierce predators and gladiators, constantly sniffing for the slightest weakness.  There are no more "dangerous minds" than recently tenured professors whose main branch of research is going well, with steady funding.  These "young guns" are constantly on the look out for some gap or flaw in the standard model, or some venerable giant to slay, using a corner of their lab to pursue some side matter that could topple the paradigm and make their reputation.

I have known many of these young guns... and their counterparts, the elderly scientists who consider their proper emeritus role to be that of shit-disturber! No matter where they live and work, they are the "most American" types alive today and that aspect of personality is one that should be emphasized, as we who want a future for our children push back against the War on Science.

== Then does "scientific consensus" have any meaning? ==

In fact, it does, though not not in the way the Michael Crichton meant.

Where "consensus" applies in science is not in the determination of absolute, unassailable truth, but in rank-ordering models of the world. These models compete and destroy each other, a process in which "truth" retains fuzzy boundaries, even while it continually grows. No scientist expects the current model or paradigm in his or her field to last forever... or even beyond the next conference. Ninety-five percent of the time, the next model will be an iteration of the current one...though sometimes the iteration is a big one, as Einsteinian gravity added whole layers to Newton's mechanistic models, without removing a scintilla of their earlier and ongoing usefulness.

Above all, this kind of "consensus" does not suppress competitive accountability and reasonable dissent.  At least, it doesn't very much.  Most of the time.

But even this tentative and contingent kind of consensus -- a rank ordering of models -- is viewed as dangerous to the interests of powerful men, when it threatens to influence public policy. As it should. Might I ask - what other source of input should be more directly valid in affecting policy than the recommendations of 95% of the experts who actually know a lot about the topic in question? People who do not have billions riding on the matter?

Can you see why undermining the credibility of science itself became a paramount matter, in certain quarters?  Why, for example, the GOP under Newt Gingrich dissolved every in-house scientific and technical advisory group when they took over Congress in 1995 and virtually banished expert testimony? Or why there is more than enough blame to heap onto the laps of Nancy Pelosi and her fellow Democrats, for failing to correct this, when they had the chance?

Scientific Consensus represents our best stab at modeling what at any given moment appears to be true. It is not some quasi religious cult thing but the best practical advice, gathered by the people who know the most.  Earnest, skilled men and women who have (for example) studied the atmospheres and climates of SEVEN PLANETS and who have transformed the Weather Report from a four hour joke into a mostly reliable ten day forecast that folks at Fox rely upon to plan their own vacations, a miracle, using the same formulae and mathematics that apply to climate change.  Imperfectly! Still, the credibility that they have earned... earned far more thoroughly than any politician, CEO or oligarch... ought to be a major influence on public policy -

- especially when 99% of the experts in a scientific field warn of great danger. And when the folks agreeing with them include the US Navy and the Russian military, busy planning hard for an ice-free Arctic.

Climate scientists aren't saying this is god-level truth. They are saying,"let's take prudent measures to prepare in case the best and top models of the world turn out to be right."  Especially since most of the measures are TWODA - Things We Ought to be Doing Anyway.

That's not dogmatism. The people who claim that it is are viewing us through their own mirror.

BrinStorming
More Articles All Articles
About

David Brin is a scientist, public speaker, technical consultant and author of books including The Postman, Startide Rising, The Uplift War and Existence...