This series is a follow-on to my 3-part series Arctic Ice 2010.  It begins with part #1: Background And Recent History.  In Arctic Tipping Points - #2: Some Feedback Mechanisms I wrote:

A stable dynamic system may react in opposition to a disturbing force, tending to bring the system back into the original stable regime.  Alternatively, the system may amplfy or augment the disturbing force, thus bringing the system more rapidly into a new, different stable regime.  For any given system, the point at which the system begins to move into a new stable configuration is commonly known as the tipping point.  It frequently arises that as a tipping point is passed, the force needed to reverse the trend is greatly amplified.

A thought experiment.  A sheet of ice completely covers a bay, lake or pond.  To avoid edge effects, let us consider a small area within the main ice cover, which has formed in Winter.  At first, the ice absorbs only about 30% of the solar heat.  Open water will absorb 94%.  The sun begins to melt small pockets of water, which percolate through the ice.  Once the ice comprises 90% ice cover and 10% open water, the area in question absorbs 36.4% of available heat.  At an ice to open water ratio of 50:50 the area is absorbing 63% of available heat energy.  At a ratio of 85% to 15% - a figure often cited for sea ice extent - the area will absorb 83.4% of the incoming solar radiation.

The reflected insolation must not be neglected.  Having travelled through the air and warmed it, insolation now makes a return journey albeit with a lowered ability to heat the air.  But it all adds up.

Cloud formation from the melting ice will reduce direct solar heat absorption but will also tend to reduce thermal losses from the water.  Above the Arctic circle, 24 hour days will accelerate the ice loss as compared with what would happen in temperate latitudes.

The water warmed by the sun, at any temperature above freezing point, will begin to melt the ice from below.  It is well known that ice has a greater immersed depth than its height in air - its freeboard. Thin ice can readily be swamped by even small waves.  The melt rate of ice in water increases rapidly with water temperature and immersed contact area.  Conduction is more effective at melting ice than is advection.

Ice has a large thermal capacity, which means that it must absorb large quantities of heat before it can melt.  Once a bit of ice is gone, the heat which it would have absorbed with no rise in temperature is absorbed by the open water - with a consequent and inevitable rise in temperature.

In the real world, in the Arctic, neither air nor water nor insolation are constant.  For each latitude that sees the midnight sun for the first time since last year, each higher latitude sees the sun at a higher altitude, with a consequent increase in insolation.  The water is subject to currents, waves, swell and tides.  The winds can vary from coastal breezes to Arctic gales.  All in all it is a very dynamic system.

In the 'thought experiment' the edges were ignored.  In the real world, ice at the margins can be lost extremely rapidly, especially as fragmented is is blown away from the main body into warmer waters, as is happening in the image below. 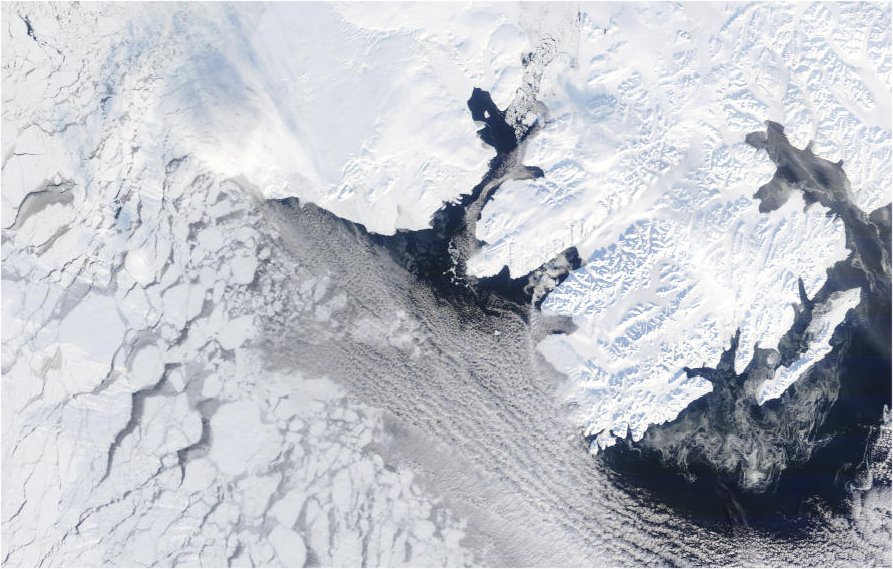 In Arctic Tipping Points - #2: Some Feedback Mechanisms I wrote about albedo.  The image above shows clear differences between the albedo - or reflectivity - of ice, water and cloud.  The next image shows the difference between the albedo of land and of ice in the Hudson Bay area. 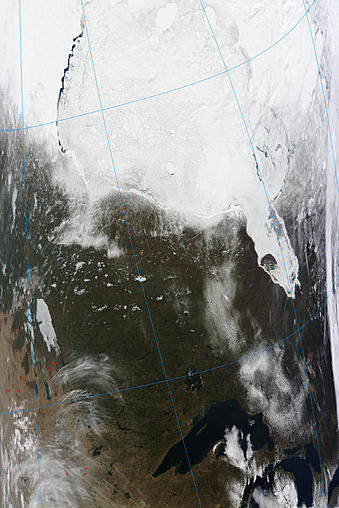 Changes in albedo, coupled with rising average temperatures due to 24 hour sunshine can move an Arctic region from iced over to ice free in a matter of days.  Historically, the thick, multi-year ice has presented a continually high albedo, a geologically huge thermal mass and a resistance to fragmentation which have all combined to keep average ice extent fairly constant over very long periods.

Thinner, younger ice melts more rapidly from direct insolation, fragments more rapidly due to the actions of wind, wave and tide, and - in open channels - is carried away more readily.

Greater loss of older ice means that many waterways which were previously closed by ice are now beginning to open.  Although many channels keep the ice from exiting to the Atlantic or the Pacific, when open they allow ice fragment dispersal, thus dramatically raising the melt rate.

In Arctic Tipping Points - #2: Some Feedback Mechanisms I cited Richard Seager of the Lamont-Doherty Earth Observatory of Columbia University on the Gulf Stream, and how it doesn't keep Britain warm.

... the 500 pound gorilla in how regional climates are determined around the Atlantic turned out to be the Rocky Mountains. Because of the need to conserve angular momentum, as air flows from the west across the mountains it is forced to first turn south and then to turn north further downstream. As such the mountains force cold air south into eastern North America and warm air north into western Europe. This waviness in the flow is responsible for the other half of the temperature difference across the North Atlantic Ocean.
http://www.ldeo.columbia.edu/res/div/ocp/gs/

If too much fresh water enters the North Atlantic, its waters could stop sinking. The Conveyor would cease. Heat-bearing Gulf Stream waters (red lines) would no longer flow into the North Atlantic, and European and North American winters would become more severe.
http://www.whoi.edu/page.do?cid=9986&pid=12455&tid=282

So, who is right?  Personally, I find a lot of good sense in what Richard Seager writes.  If the air moving across the U.K. had picked up enough warmth to account for the observed winter climate, then surely the Gulf Stream would lose its effect by the time it reached the latitude of Scotland.  It doesn't.  The Gulf Stream carries on into the Arctic regions where it melts a lot of Arctic ice in Summer, and keeps the extent of that ice in check in Winter.

Hammerfest in Norway is ice-free all year round despite the long 24 hour Arctic nights of Winter.  This is thanks to the Gulf Stream, as noted in this Time magazine article of June 08 1936.


From Miami Beach to the Arctic ice 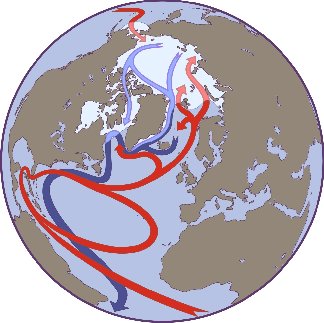 The Gulf Stream ends its long journey North in the Arctic's Barents Sea.

The only water mass with a temperature above zero degrees Celsius when it flows out of the Barents Sea and into the Arctic Basin is the recirculating Atlantic Water. But this water mass originates in the Arctic Basin and loses some of its heat as it flows through the northeastern Barents Sea before continuing eastwards into the Arctic Basin. The northeastern part of the Barents Sea is thus the end station for much of the Norwegian Atlantic Current, where the waters that once comprised the Gulf Stream leave the surface, dive downwards and flow along the sloping sea floor towards the cold depths of the Arctic Ocean.
Vidar S. Lien
http://www.cicero.uio.no/fulltext/index_e.aspx?id=8027

A study published in 1956 suggests that sea level in Miami can affect the rate of ice loss in the Barents Sea.

Variations in flow of the Gulf Stream system and in transport of warm Atlantic water across the Wyville-Thomson Ridge northeastwards (via the North Cape Current) affect the areal extent of ice in the Barents Sea. Theoretical considerations and data are presented relating variations in the Florida Current (southern Gulf Stream system), as indicated by mean sea level changes at Charleston, S.C., and Miami, Fla., to ice conditions in the Barents Sea three years later. Low sea level at Charleston and Miami means strong flow of the Florida Current, contraction of the North Atlantic eddy, little warm Atlantic surface water discharged into the Barents Sea and thus more ice. Conversely, high sea level at Charleston and Miami results in more Atlantic water in Barents Sea and less ice. Relationship of ice to winds in Barents Sea area is also briefly discussed. In the period 1925-1938, good agreement between sea level, ice, and wind curves occurs in 12 of the 14 years.
Some factors affecting the extent of ice in the Barents Sea area   /   Elliott, F.E.
Arctic, v. 9, no. 4, 1956, p. 249-257, ill.
ASTIS record 9792
http://pubs.aina.ucalgary.ca/arctic/Arctic9-4-249.pdf

That paper is cited in a later study which examines various mechanisms affecting the temperature of waters in the Barents sea.

To evaluate an objective statistical forecasting system, we have analysed time series representing mechanisms previously proposed as influencing the temperature of the Barents Sea. These include components of suggested periodic nature, large-scale advective effects, regional processes, and atmospheric teleconnections. The predictability of Barents Sea temperature based on the above mechanisms was evaluated through calculations of auto- and cross-correlations, linear regression, spectral analysis and autoregressive modelling. Forecasts based on periodic fluctuations in temperature performed poorly. Advection alone did not explain a major part of the variability. The precision of predictions six months ahead varied with season; forecasts from spring to autumn had least uncertainty. A first-order autoregressive model, including modelled atmospherically driven volume flux to the western Barents Sea during the preceding year and the position of the Gulf Stream off the eastern coast of the USA two years earlier, explained 50% of the total historical temperature variability.
Predicting the temperature of the Barents Sea

If sea levels in Miami can affect sea temperatures in the Barents Sea, then that would seem to constitute another feedback mechanism wherein Arctic temperature rise and sea level rise create a feedback loop.


Continued in Arctic Tipping Points - #4: The Broken Bridges Of Nares