Here is a most enjoyable physics experiment that anyone can do almost anywhere.

You will not need:


Wait until the slosh is dissipated by convertion of kinetic energy into heat.  The added heat is virtually undetectable, so I don't really know why I bothered to mention it other than to satisfy the dark_forces that lurk inside pedants and rivet-counters.

Do not wait until the thermal energy dissipates.  This would not invalidate your experimental results, but it would make your drink less drinkable, and we don't want to waste it, do we?

As soon as the liquid surface is stable, you may begin the experiment.

1: blow on your hot drink to cool it.
2: observe the visible results.
3: enjoy your drink. 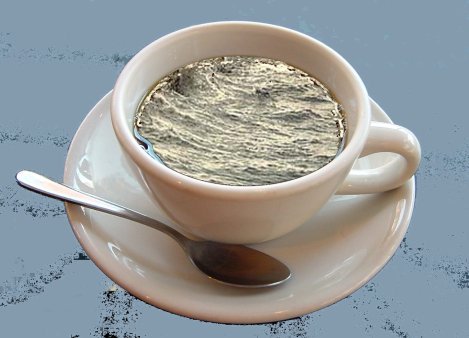 The visible result demonstrates at a very small laboratory scale the difference between slosh and SLOSH.

Which is not really the point of the experiment.

Blowing on a liquid causes waves.  In the absence of friction, the surface of a liquid would be unaffected by air travelling over it parallel to the surface.  Because of a complex of friction forces at the boundary between any two fluids, and complex friction forces within the fluids themselves, any relative translational motion will generate a wave effect.  Wave energy dissipation will convert kinetic energy into heat.


This simple observation is a finding of very wide application.

If the cup were a depression in sand, the wave action would cause sand grains to move around in the region of the static liquid level datum: the swash zone.

If the cup was much wider than its depth you would find on tilting it that some of your precious hot drink would rapidly surge, pile up and spill over onto the desk in the slosh zone due to a phenomenon known as the free surface effect.


We have covered slosh, SLOSH, surge and swash.   All that remains to be mentioned here is the common or garden earthquake.  Huh?

When you blow on a hot drink as smoothly as you can, observe the judder in the waves.  If you get judder at the interface between two fluids, it is to be expected that you will get a lot more judder between two solids.  When you put a tool against a workpiece in a lathe and get it wrong you get a lot of judder.  It is most commonly called chatter.

A chattering  tool, an earthquake and a hot drink have much more in common than you ever realised.  Physics is fun!
The Chatter Box
More Articles All Articles
About