The Jakobshavn Isbrae, or Jakobshavn glacier, now becoming known by its local name - Sermeq Kujalleq - has been observed retreating since about 1851.


Near the small town of Ilulissat, formerly Jakobshavn, Sermeq Kujalleq is the Northern hemisphere's largest glacier with an outlet to the sea.  It drains about 6.5% of Greenland's ice sheet. The ice stream's contribution to sea level rise is about 0.06 millimeters - about 0.002 inches - per year, roughly 4% of the 20th century rate of sea level increase.

The calving front of Sermeq Kujalleq is 5 km long. The extremely high velocity of 19 metres a day, makes it one of the world's fastest glaciers. It produces 35 cubic kilometres of ice a year and is responsible for one-tenth of the total production of icebergs from the Inland Ice. The icebergs fill the fjord Kangia, and vary in size from small blocks to giants of 1.5 cubic kilometres of ice or more. Really large icebergs are rare, but they can always be seen at the mouth of the icefjord, where they run aground on the threshold of Isfjeldsbanken.

This video from 2008 shows the location of the glacier and something of its dynamics.

DiscoveryEarthLive — 23 April 2008
Since measurements of Jakobshavn Isbrae were first taken in 1850, the glacier has gradually receded, finally coming to rest at a certain point for the past 5 decades. However, from 1997 to 2006, the glacier has begun to recede again, this time almost doubling in speed.

This animation shows the flow of the Jakobshavn glacier and is narrated by Waleed Abdalati, head of the Cryospheric Sciences Branch at NASA's Goddard Space Flight Center. 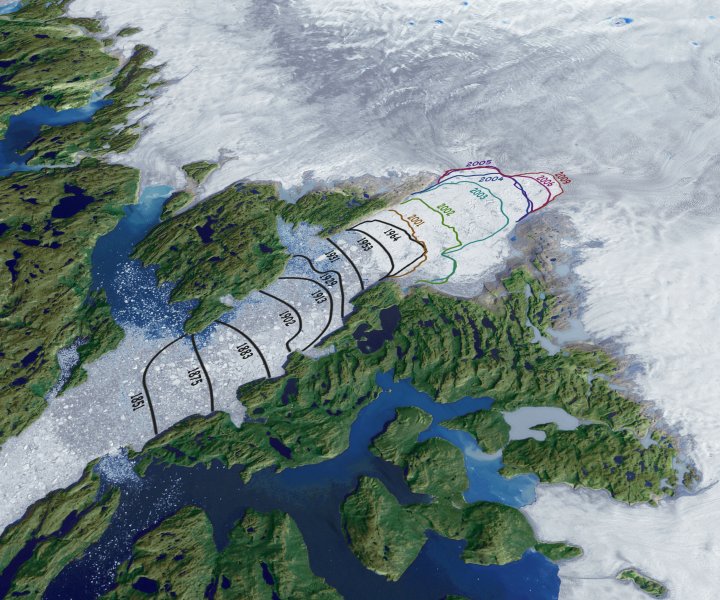 
In the Winter when the sea is frozen with thick ice there is a 'back-pressure' tending to reduce calving.  There is no surface meltwater to drain through the glacier and thus accelerate calving.

Contrast that with the meltwaters of Arctic summer and the dissipation of the compacted sea ice, which can accelerate calving.  Another calving factor is the effect of warm water melting the glacier front from below.  The melting of ice from above and below reduces its thickness, hence its mass is reduced locally, hence it becomes more buoyant.  While the ice is grounded there is a degree of back-pressure which is lost once the ice becomes buoyant.  This mode of ice mass loss is known as the Jakobshavn effect.


The pictures below compare April 2009 and 2010 sea ice conditions in the area.  Calving appears to be greatly slowed by the presence of the sea ice.  Older icebergs grounded in the fjord would seem to act so as to reinforce the sea ice and to increase the back pressure.  I suggest that the length of time that the fjord is not blocked by sea ice will have at least a small effect on the calving rate in addition to the Jakobshavn effect.  The length of that 'open season' is increased of recent decades. 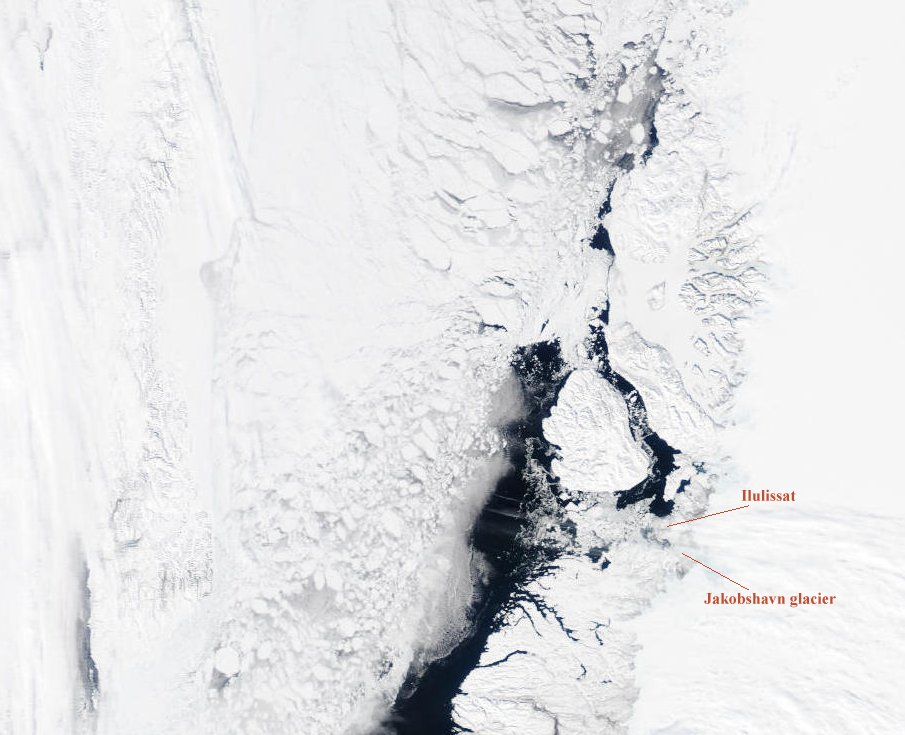 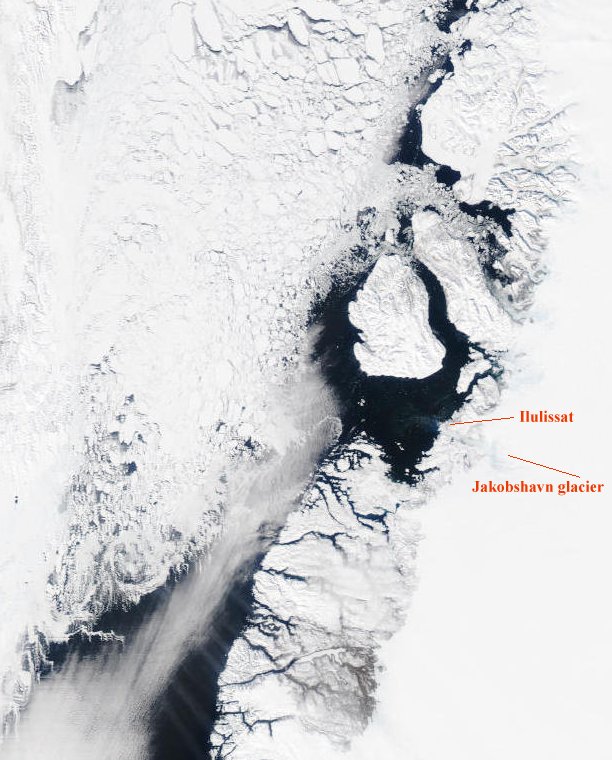 When a cubic kilometer or more of ice topples off the end of a glacier it isn't expected that it will do so in silence.  What was unexpected to geologists was that icebergs calving into water would produce seismic waves.

The recent loss of Jakobshavn Isbræ's extensive floating ice tongue has been accompanied by a change in near terminus behavior. Calving currently occurs primarily in summer from a grounded terminus, involves the detachment and overturning of several icebergs within 30–60 min, and produces long-lasting and far-reaching ocean waves and seismic signals, including “glacial earthquakes”. Calving also increases near-terminus glacier velocities by ∼3% but does not cause episodic rapid glacier slip, thereby contradicting the originally proposed glacial earthquake mechanism. We propose that the earthquakes are instead caused by icebergs scraping the fjord bottom during calving.

I am watching to see where the calving front will be in Summer, 2010.