The tilt of the earth's axis gives us our seasons.

But not in an obvious way.


Understanding climate science requires a cross-disciplinary approach.  This is the second part of the mainly astronomical section.  In part 2, I introduced the idea of, in a manner of speaking, building a model of our earth-moon-sun system.  Here I continue with a discussion of seasons and their primary astronomical causes.

New readers may wish to start at Understanding Climate : #1 - Components Of Climate.


This is the second chunk of the astronomy section.

Caveat:  the idea that daylight length change is the primary driver of seasonal temperature changes is not well-established science.  Indeed, most educational materials on the web which mention daylight hours as a driver of temperature change credit insolation angle as the primary cause of seasons.  The ideas expressed here may, accordingly, be somewhat controversial.

What causes the seasons?  What astronomic/geometric factors can affect the temperatures experienced by us on earth?

The distance of our planet from the sun varies slightly throughout the year.  Due to axial tilt, the northern hemisphere is tilted towards the sun in our northern summer.  At this point in its orbit, the earth is a little further from the sun than during northern winter.  The view that it is hotter in summer than winter because we are closer to the sun is completely false in the northern hemisphere.  The average daily temperature differences between northern winter and northern summer cannot logically be due to a mere matter of distance.

The generally taught idea is that the angle at which the sun is seen in the sky by an observer affects the observer's local temperature.  This angle changes the distribution of solar energy per unit square.  A lower angle leads to more widely distributed heat. 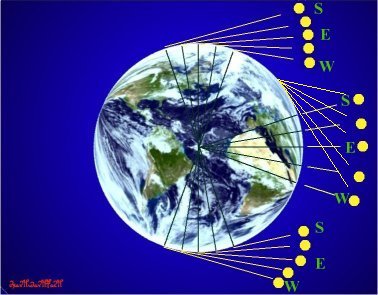 For the moment let us disregard the effect of the amount of atmosphere that the sun's rays have to pass through.  That is a matter best discussed under the topic of atmosphere.

Often overlooked by educators, the annual thermal cycle due to annual variation in daylight hours is, I suggest, the primary driver of seasonal variations in regional temperatures.

If the earth's axis wasn't tilted then every part of our planet would continually be exposed to 12 hours of daylight and 12 hours of darkness.  Starting from the first hint of dawn, the cold ground and air would begin to warm up. As the sun rose to its zenith its heating power would rise to the local maximum.

Following nightfall, the heat would continue to radiate away, limited by the local temperature difference between earth and space, and the atmosphere's blanketing effect.  The coldest point would be reached when either the heat loss through the atmosphere became trivial or when time, in effect, ran out at dawn.

The earth's axial tilt has an effect that can be directly observed by most people in the ordinary course of their daily lives: varying numbers of daylight hours.  The further away from the equator, the greater the effect.

Moving north from the equator in northern winter, an observer experiences fewer daylight hours and more hours of darkness.  A point is eventually reached where there is no daylight.

For each degree change of latitude there is an easily measured reduction in daylight hours and a commensurate increase in the hours of darkness.

Even allowing for factors such as the thermal mass at ground or sea level and atmospheric blanketing and heat distribution effects, zones of latitude will experience temperature drifts from warmer in long summer days to cooler in short winter days.

Within the arctic and antarctic circles, the ratio of daylight to night hours can step outside the bounds of the 24 hour day.  These zones can radiate heat away into space during the long winter darkness.  The limit of lowest temperature is set in these zones by the atmosphere's blanketing effect and any heat that happens to find its way to the poles from distant sources.

The Arctic circle marks the zone within which the northernmost point of the terminator may be found on any day of the year. 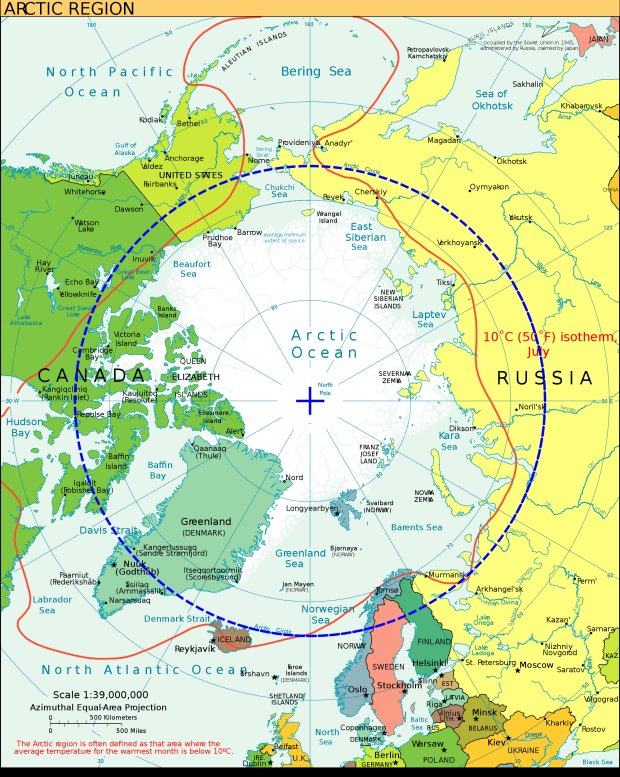 http://edmall.gsfc.nasa.gov/inv99Project.Site/Pages/solar.insolation.html
The Chatter Box
More Articles All Articles
About