All animals breathe in air and then breathe it out again.  This astounding fact, seemingly new to some web users, has nothing whatsoever to do with global warming.

Some people are still seemingly astonished to find that cows breathe out air deficient in oxygen and with a surfeit of CO2.  They eagerly report this brand new finding to a breathless crowd of eager supporters of any 'proof' that humans are not responsible for the inexorable rise in global CO2.

Edit:  in response to a perfectly sound criticism from Michael White, in comments below:

The focus of this article is on CO2 purely for the sake of simplicity.  Complex 'carbon equivalent' and 'carbon footprint' calculations seem not to be understood by much of the general public.  Much of the literature on livestock emissions refers to CO2e - an artificial CO2 measure which includes methane and other emissions converted to equivalent CO2 greenhouse gas effects.

Although this article refers to CO2, graphs like the one at the end show a lack of historical records of CO2, CH4, NO3 and temperature trends which should be in those records if large livestock herds are significant sources.  There is no upturn reflecting the global rise of livestock herd sizes in the first half of the 19th century.

Here is why the 'cows cause global warming' argument is a load of bull.

There is sound scientific evidence to show that CO2 emissions have been rising since about 1860, with a sharp upturn in the trend about 1910.  These dates relate to a rise in coal use and a rise in oil use respectively.  What was the world like before about 1860, and why was there a boom in coal use?

One of the driving forces behind the global growth of the steam railways was the need to get meat to markets rapidly and cheaply.  Before the railways, animals were moved in great herds on cattle drives, most notably in the USA and Australia.  Many songs preserve the collective memory of these drives and trails - for example the Chisholm Trail to Abiline, Kansas.

Just as the steam railway was developed from a need to get product from mines to industry, so the geographical extension of the railways was driven in large part by the need to get meat into the cities.  Railways were driven from cities to railheads where animals were brought in vast numbers.  The Abiline, Texas railhead, established 1881, was named after the former end of the cattle drive in Kansas. 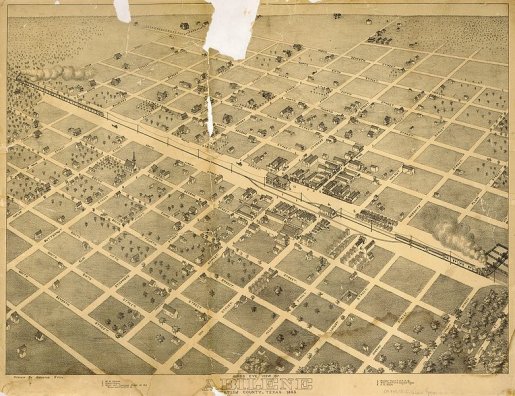 Of course, the US railroad system was begun long before the first cattle railhead was established.  One of the USA's earliest locomotives saw first service in 1831.  It was named John Bull.  History does not record whether this was to honor the loco's country of origin - the UK - or to caricature the British people. 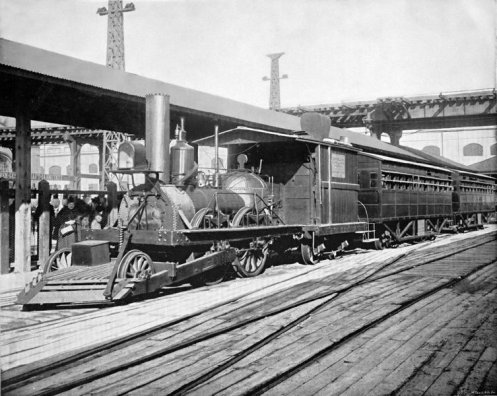 In the early days of the globalisation of railways, many locos were wood burners.  Coal was a better fuel: it provided more energy for less volume than wood.  With the expansion of the railways, more coal was transported and fewer trees were available for fuel.

And so we have a period during which ever larger herds of animals were being transported by the burning of, at first mainly wood from deforestation, later mostly coal.  This should show up in the CO2 records.

Animal populations in the age of steam

The following paragraphs are taken from The World As Modified By Human Action, George P. Marsh, 1874.

The only indigenous North American quadruped sufficiently gregarious in habits, and sufficiently multiplied in numbers, to form really large herds, is the bison, or, as he is commonly called in America, the buffalo; and this animal is confined to the prairie region of the Mississippi basin, a small part of British America, and Northern Mexico. The engineers sent out to survey railroad routes to the Pacific estimated the number of a single herd of bisons seen within the last fifteen years on the great plains near the Upper Missouri, at not less than 200,000, and yet the range occupied by this animal is now very much smaller in area than it was when the whites first established themselves on the prairies.

But it must be remarked that the American buffalo is a migratory animal, and that, at the season of his annual journeys, the whole stock of a vast extent of pasture-ground is collected into a single army, which is seen at or very near any one point only for a few days during the entire season. Hence there is risk of great error in estimating the numbers of the bison in a given district from the magnitude of the herds seen at or about the same time at a single place of observation; and, upon the whole, it is neither proved nor probable that the bison was ever, at any one time, as numerous in North America as the domestic bovine species is at present.

Summing up the whole, then, it is evident that the wild quadrupeds of North America, even when most numerous, were few compared with their domestic successors, that they required a much less supply of vegetable food, and consequently were far less important as geographical elements than the many millions of hoofed and horned cattle now fed by civilized man on the same continent.

At the same time as the rise of railroads and herding in the USA there was a similar rise in Australia, together with a large-scale clearing of scrub and forest.  Argentina's contribution to global cattle stocks is also notable, rising sharply from about 1880 to 1920.

Where is the record?

If domesticated herds of animals contribute to global warming, at least one of the CO2, CH4 and temperature records should show a sharp upswing prior to about 1860 due to the rise of meat production on a global industrial scale.  In reality, the records show significant upswings only after that date.

Any theorist wishing to show that animal farming makes a significant contribution to global warming must explain why the trend in global warming does not commence with the rise of industrial scale farming.