Tweet
If you don't trust Centers for Disease Control claims on vaping, opioids, or pre-diabetes, you are not wrong. In the last decade they became increasingly unreliable for anything where they don't just gather data from states, like vaccine rates and how many people vomit after buying unpasteurized milk

On numerous other issues, they seem to pick a position and then torture data until they confess. And that is a concern about all their findings. In the case of gun violence there is a concern about their numbers they replaced one hospital in a small (60) sample with one that had more than 100 times greater non-fatal gun injuries its predecessor ever had. The new hospital added over 22,000 gun injuries to the 2015 national estimate which made gun violence look more common.

So gun violence could be less common, I am all for that, but that misses the point. There is no way to trust anything in their estimates.

Now, I am not a gun ban guy, but I don't buy that a mental health reason for taking away someone's guns would be abused by government any more than search warrants are. Sure, it happens, but not enough to wipe out the benefits, not even close. Nor is gun violence related to White Supremacy That Sounds More Like Extinction Rebellion any more than it is ANTIFA, that is  just people using tragedies to support their beliefs. The one commonality in mass shootings besides a gun is mental health problems, and since there are more guns than people, the gun factor is diluted substantially.

More gun restrictions won't prevent suicide, the overwhelming cause of gun deaths, we know that because gun-less Japan suicides have not declined, and they won't prevent crime, as we know because England, Scotland, and Wales hold the spots for the highest crime rates in the civilized world despite guns being basically banned.  But in every mass shooting except one this decade, a red flag designation might have prevented it.

But we can't have these debates if there is no accurate data on gun injuries. CDC is supposed to do that.

FiveThirtyEight and The Trace (a left-wing statistical group and an anti-gun group, respectively, noted for transparency though that does not make their findings wrong) exposed how the CDC’s gun injury estimate was vulnerable to unreliability because of how few hospitals are in the data set. When they replaced one hospital, it caused the injury estimate to swing drastically. 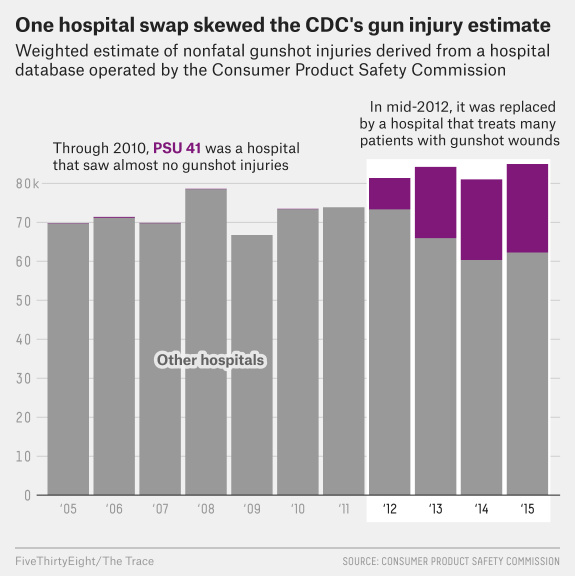 The CDC has taken the data down, stating it is "unstable." That is a win for journalism and public health. I don't always agree with the FiveThirtyEight agenda, Nate Silver got out of sports and into politics because he wanted Sen. Barack Obama to beat Sen. Hillary Clinton in the 2008 primary so you know his goal isn't nonpartisan, but I am all for forcing government agencies to be more transparent about how data are selected.

And for that these groups deserve public thanks.