Given that fickle media climate, it's no surprise that fast food darling Chipotle thought a fake-hack of its Twitter account would generate some new followers - they sell Mexican food, and Mexicans are the new Prius.  What value are those Twitter followers they wanted?  I have no idea. I have had people with 500,000 followers Tweet about my articles and it led to about 50 reads, but anything of mine that hits on an actual social news site, like Reddit, will bring 10,000 people and up. Twitter is probably valuable if you sell something but for boring old science content, not really worth the time.

A guy who can't even order lunch in under 1,000 words can keep it brief just this once: their plea for attention failed, at least compared to the companies who did it before them. The reason is because it violates the only rule of social linking, or whatever category Twitter and Facebook fall under: don't be boring when you are trying to be edgy. 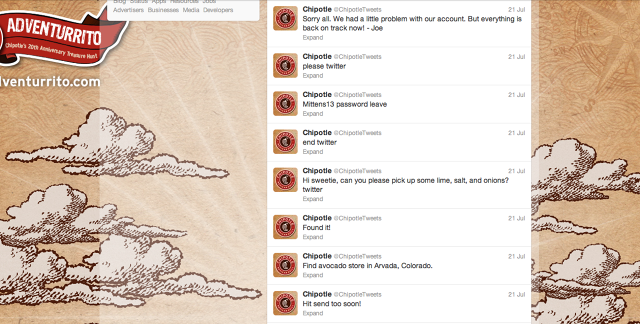 It could have worked. Burger King was actually hacked and that got a lot of publicity. And then Jeep got hacked and ditto. And then MTV faked a hack - I guess the Rock And Jock softball audience is in retirement homes or something - and they got attention for being a fake hack. And then BET did it.

But a Mexican fast food company has to have some spicy faux-hacking action if they are trying that after it's almost predictable. Their was not even picante, much less caliente. They got some followers, sure, but a large chunk of their followers also felt like they had been punked. Not punked as much as Egypt felt after Twitter got them a revolution, but still, some hurt feelings.