Kim Wombles
As a preface to this post, I have to offer a general complaint against media (both print and television) and their bias against providing citation information or links on studies when they report on them. You always have to go digging to find the actual study, and it seems to me to be lazy-ass reporting. We already know how often they misinterpret information, and then they make it even harder to find the originating information. For example, take this story Toxins found in pregnant U.S. women in UCSF study from SFGate yesterday. The UCSF link took me to another SFGate page. Oh, helpful. Not.

Alright, so get to the second paragraph and at least the journal is identified, so I have a starting point: Environmental Health Perspectives. But again, no link is provided. Thankfully, googling the journal was easy, and I've already provided the link to you. And even more fortunately, the study discussed at SFGate is the top one listed at the journal. When you click on it, you go to the abstract. On the right of the page, there are a number of download choices, and you can get the 42 page pdf for free. How hard would it be for internet news articles to provide the direct linkage? About as hard as it was for me. I'm thinking it's time for that stuff to change. When folks who blog for free can take the time to provide links and supporting documentation, print and online media who are being paid to inform citizens can do just as well at leading consumers back to the originating information. Rant over.

Woodruff, Zota, and Schwartz looked at 268 pregnant women and "analyzed data for 163 chemical analytes." Now this is way more Emily Willingham's field and I'm not asserting any expertise nor going to go into great detail on this. To paraphrase McCoy, "Damnit Jim, I'm an English and psychology instructor, not a biologist."  Woodruff et al.'s conclusions (from abstract) were a no brainer: "Pregnant women in the U.S. are exposed to multiple chemicals." Oh, and of course, the usual caveat that more research is required. But I shall go deeper. Anyone can read an abstract. :-) Oh, look, mild snark. Oh, snark, I'd missed you. I thought you'd left me permanently. Ah, but, note I'm not being snarky to the study authors, please, or really to the study. It just needs to be let out occasionally so I don't explode.

We shall look deeper. Teratogens are a serious concern for the developing fetus, something I cover briefly in general psychology and in greater detail in Lifespan. Woodruff et al. write "Multiple chemical exposures are of increasing concern. Studies find exposure to multiple chemicals which act on the same common adverse outcome can have a greater effect than exposure to an individual chemical." There's nothing to argue with here. We need to be concerned with exposures to the developing fetus and we should be concerned with our exposure to toxic chemicals. I have to digress here: many folks out there display an incredible ignorance when they complain about chemicals, as in "Oh, I don't use any chemicals in my housecleaning; I use all natural products." Ahem...well, you all know what's up with that.

Woodruff et al's study is important because it provides a baseline for future studies. Their's is the first study to directly measure pregnant women's exposures: "analyzed biomonitoring data for pregnant women from NHANES to characterize exposure to individual and multiple chemicals and their metabolites in pregnant women. Additionally, we evaluated the extent to which levels measured in non-pregnant women are representative of levels in pregnant women, and what factors may explain observed differences."

They "analyzed the 2003-2004 cycle, as it represents the cycle with highest number of chemical analytes measured across the sample of pregnant women. We limited our study population to those aged 15-44 years old to be consistent with the definition used by the National Center for Health Statistics for women of childbearing age (Chandra et al. 2005). Therefore, our
study population includes 268 pregnant women and 1489 non-pregnant women aged 15-44 years included in at least one subsample for chemical analyte analysis."

Have you ever watched Doctor Phil (not a fan, by the way)? He has a tendency to say obvious shit  stuff like "You'll either weigh more in a year or weigh less or be the same." No, really? Ah, we all do it. Dr Grumpy told a patient "I think your condition will either get better, worse, or stay the same." Woodruff et al. report: "We found 0 to 100 percent of pregnant women had a detectable level across the individual chemical analytes."

The study authors then launch into a detailed discussion of the chemicals found. Going back to the abstract because of its brevity: "Certain PCBs, organochlorine pesticides, PFCs, phenols, PBDEs, phthalates, polycyclic aromatic hydrocarbons (PAHs) and perchlorate were detected in 99 to 100% of pregnant women. The median number of detected chemicals by chemical class ranged from 4 (out of 12 PFCs) to 9 (out of 13 phthalates). Across chemical classes, median number ranged from 8 (out of 17 chemical analytes) to 50 (out of 71 chemical analytes)."

The authors note that they are not able to make any correlations between any neurodevelopmental problems in offspring and the chemical exposures in the pregnant women. It is well known that fetal development is susceptible to teratogens and that pregnant women should be careful to limit their exposures.

It may be that some exposures to potentially toxic chemicals are beyond our control. Future research into these various chemical classes will undoubtedly answer questions relating to exposure and to longterm outcomes.

But back to the SFGate article on the study. Instead of ending at reporting the results of the study, the reporter interviewed "Dr. Sarah Janssen, senior scientist at the Natural Resources Defense Council in San Francisco,[who] said the levels of exposure shown in the study were low, but she was concerned about fetal harm that could be caused by the mother's exposure to multiple chemicals acting together. Colliver quotes Jannsen as saying "unborn babies are exposed to a soup of chemicals," to which I'd like to say, really? And ain't we all? I know, she meant toxic chemicals and chemical compounds. Right? Soup. Sigh. Now I'm gonna picture the baby in soup with elemental symbols floating around and chemical compounds. Great picture. Can I get an H+? Can I get an Na+?  Ah well. Ooooh and an NaCl? Salty! I know, I'm bad. Sometimes, we just have to go there. We do. There isn't anything we can really do about this overall (as exposure sources haven't been identified) and getting carried away and living with only vinegar and borax and wearing hemp isn't really a solution most of us are going to do.

Colliver closes her article with a list of recommendations to avoid exposures from various unidentified "health experts." Can't hurt to try them, but it would be nice to know who these health experts are. After all, if it's Dr Jay Gordon, Dr. Bob Sears, or Dr. Joe Mercola, I probably don't want to listen to them, do I?

So, what do you do with this latest study? Well, you nod and go, shit. Okay. And move on. You do the best you can and accept that some things are beyond your control. Ah heck, and if you must, clean your windows with vinegar. Go out and get baking soda and borax, too. But don't for a minute think those aren't potentially hazardous, as well. My bottle of boric acid for treating yeast infections says poison on it. 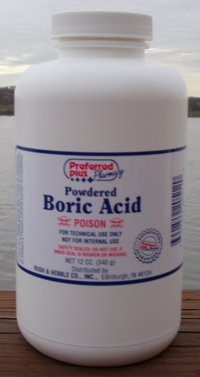 Just saying. Dose does matter. And what you're doing with it.
Countering
More Articles All Articles
About