What We Fight For: Children Who Will Find a Place in the World

Have I said I've been in the trenches now for two decades, fighting to get what my children need? I get tired of the fight, tired of the battle with the outer world to get the resources needed, and so, when Bobby was nine, after he'd had a stroke, I realized I couldn't battle it all. I was worn out. I was tired of fighting for an appropriate education all while fighting the medical system to get him help, and honestly, all while fighting with him to give him the basic self-help skills that would let him be potty trained, be able to dress himself, bathe, brush his teeth, comb his hair, and eat meals without disasters. I was tired of being up for 36 hour stretches since he wouldn't sleep and was destructo-kid and couldn't be left unattended.
Tired, worn, and grieving were the first ten years of my son's life. You know what else they were? Enchanted with his beauty, in love with his smile, delighted when he hugged or cuddled or vocalized anything. As tired as I was, I was completely head over heels for my sweet boy. I made the most of every moment with him, spending long afternoons lying in bed with him, surrounded by his favorite books that we would read over and over, day after day.

By the time the girls came along, I'd had a couple years to process his stroke, the real risks of him having another one, and the break from fighting the school system. After his stroke, we brought him home. No more fighting that, no more. It became about teaching him in a safe friendly environment where his psyche was safe, and we resumed those wonderful afternoons surrounded by piles of books.

Eventually, after we moved here, next door to my parents, we worked at getting him into the day center where he would have the chance to work on socialization skills with others like him, where he would be safe, accepted, and loved. And if you've read this blog at all, you know what a shining, bright young man he is and how far he's come. He is sweet, opinionated, giving, loving, and he makes a difference daily. He is happy, he is loved, and he contributes. He is my light. 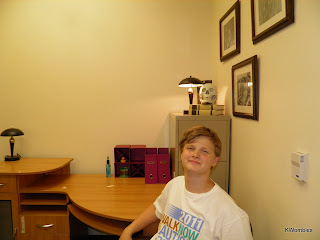 after helping me move into my office last month


His sisters shine, as he does. They are my garden girlies, and they never cease to delight and amaze. All three of them adore the others, sit on the couch for our evening sci-fi marathons entwined in each other, the three of them: a grown man who loves to play pokemon and yu-gi-oh with them and who loves them so much that all he can talk about is getting them this $50 video game that he knows they'll love for their birthdays, and these two long-limbed girls: they wrap themselves around each other in complicated pretzels and hug and squeeze and loll on each other in a way my brothers and I would never have done. 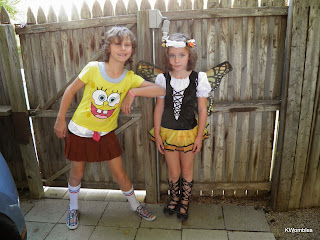 I do not speak for autistic people. I would not even were I an autistic individual.
I do not speak for parents of children with neurological differences. It is not my place.
I do not speak for anyone, to replace their voices with my own.
I speak for me and my experiences as a mother with her own issues and invisible disabilities who safeguards her children and fights for what they need, while working with them to teach them to fight for themselves for what they need.
My experiences and my words in no way negate another person's story or perspective nor does it ride roughshod over their own experiences and words.
Maybe if people quit worrying about who's speaking for them and spoke for themselves and let others speak for themselves, there'd be less acrimony and accusations.
*In response to the series at The Thinking Person's Guide to Autism.