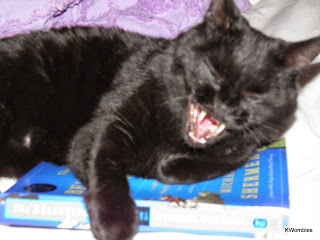 
It took me a while to find this photo in my stream of thousands of photos because it's more than a month old. I've been reading Michael Shermer's latest book The Believing Brain for over a month now to review it for Countering and Science 2.0. I spent more than a month with Baron-Cohen's The Science of Evil. I try to be thorough and careful in my reading of books I review; I don't want to gloss over it and throw out a review that is, well, a throw-away. This means that their work tends to stay with me and percolate in additional posts.


Michael Shermer and Robert Sapolsky  have much in common; I suspect that people who specialize in one area, spend their time teaching it, giving talks about it, and writing it end up having a well-honed spiel that makes the audience familiar with the person immediately in recognizable territory. I use the works of both these compelling and charismatic scholars in my classes; Shermer and Brian Dunning's work ground my composition courses and set the stage for the semester, while Sapolsky is used in my psychology classes (although I don't teach psychology much any more). Listening to them give talks is never boring, no matter how many times I've watched a particular talk with students. As an instructor, my hope is to be that thorough, that polished, and that easy a speaker. 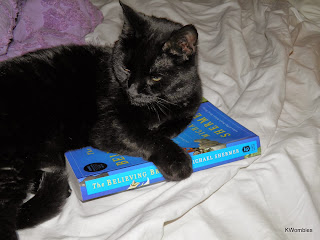 Reading Shermer's newest book was like dropping in on an old friend. I could hear his voice as I read, his inflections, and a lot of the material is familiar to long-time readers. Whether Shermer's new to a reader or an old friend, this new book is worth the investment of time; it's well written, charmingly presented, and full of passages that time and again I wanted to run to the computer and type in to share with readers. It builds on his ideas about patternicity and agenticity, updating them with the latest research that bolster his ideas.


It's an excellent read and at this point, after a month of careful reading and rereading, so well dog-eared by me that each time I pick it up to continue reading it, I have to look for the latest dog-ear. This should be required reading for all college students; it really should. Understanding how we form our beliefs about the world around us and then rationalize those beliefs is important and a warning that however strongly convinced we are of something, we need to take into consideration that our belief came first and the support came afterwards. It means a certain sense of discomfort always being endured, to tread lightly, to balance carefully, and to hopefully remain open to new, contradictory evidence.


What Shermer does here, and does well, is to take hundreds of scientists' work and to weave a tapestry of it, so that we have a convincing narrative (if we roll that way, anyway) that the mind and the brain are one, that without the brain the mind ceases to be, and that we are hard-wired to seek out patterns and make sense of them and to see an underlying agent for those patterns. 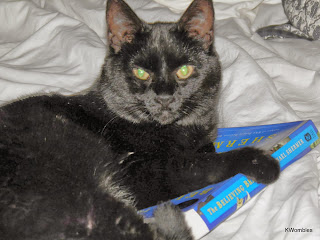 Much of this will be familiar to those in the psychology even if for some reason they were unfamiliar with Shermer, but it might be shocking information to those who aren't versed in the research, and his section on belief in God is bound to get, oh, 70% of readers irritated as it will go against their belief systems. Ideally, readers who believe in a creator will be able to rise above their belief systems and read this section, as the ideas and the science behind them are important and ought to be considered, although I would not for a moment suggest it will cause people to set aside their belief systems. Shermer doesn't dance around his beliefs, and he's mindful of the reality that skeptics (his personal preference to the terms agnostic and atheist) are still the minority.


Shermer closes his book with an epilogue entitled "The Truth is Out There." Shermer writes:

"When I call myself a skeptic I simply mean that I take a scientific approach to the evaluation of claims. Science is skepticism and scientists are naturally skeptical. Scientists have to be skeptical because most claims turn out to be false."

I would, based on the evidence Shermer's provided in this book, argue that scientists and scientifically-based individuals are not naturally skeptical at all, although they may be more inclined towards it. Instead, they mindfully cultivate an intentional skepticism, working hard to get around their own belief-dependent realism so that they can get as close to objective reality as possible, knowing that they must remain vigilant, and knowing that they will, at times, fail to achieve this vigilance and to maintain this skepticism, that their own blinders will lead them down stray paths and occasionally make them look like fools.  It's still the best chance we have, though. And it's one I hope more and more people will choose to cultivate. 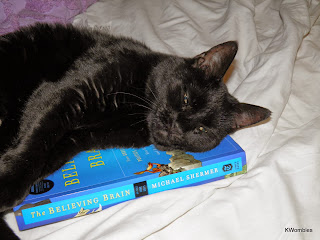