In general, human beings tend to be quite generous. As such, it is not a big step to question whether the same is true for our close evolutionary cousins, the chimpanzees (Pan troglodytes). A new study indicates that it might.

When it comes to chimp sharing behavior, there has long been a discrepancy between studies in the field, and those in laboratory settings. In the field, chimpanzees have been known to share food, console each other and lend support during a fight. In lab experiments, however, chimps don’t really share, and are viewed as ‘reluctant altruists’, sharing only when prompted by solicitation and other forms of pressure.

But researchers from Emory University in Atlanta argue that these experiments use setups that are too confusing, making it unlikely that the chimps really understand how what they do affects their partner. As a consequence of these considerations, they designed a ‘chimp friendly’ way to investigate the generosity of chimpanzees.

The experiment involved two female chimps, placed in side-by-side rooms separated by a mesh (see figure 1). Both had been trained to acquire food from trainers, mediated by colored tokens. One token would get the choosing chimp a reward, the other one would get both her and her (not choosing) partner one. The choosing chimp was given 30 chances to choose one of the tokens. Seven female chimps were tested, each time with three partners, which could observe the whole process. 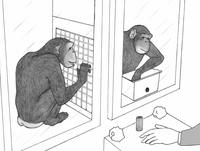 The results showed a significant bias (between 53 and 67%) for the prosocial option, meaning the option that would get both chimps a reward.

Prosocial choices occurred both in response to solicitation by the partner and spontaneously without solicitation. However, directed requests and pressure by the partner reduced the actor's prosocial tendency. These results draw into question previous conclusions indicating that chimpanzees have a limited sensitivity to the needs of others and behave prosocially only in response to significant prompting.