A perhaps somewhat lugubrious study, published in PLoS ONE, set out to investigate whether decapitation is a humane method of euthanasia in small animals, such as rats and birds. To do this, they used 22 rats that were decapitated while an EEG was recorded. Of these rats, 9 were awake and 8 were anesthetized (5 rats lost the electrodes during the experiment).

Not surprisingly, the EEG lost power fast and globally and decreased to about half the initial value in about 4 seconds after the decapitation. Where the EEG markedly differed between both groups before the ‘death sentence’ was carried out, it did not appear different post decapitation.  The authors present two hypotheses to explain this phenomenon:

One interpretation is that the resulting power of theEEG in the awake animals is not well indicative of consciousness and distress, since the same activity is present in the EEG of non-conscious anesthetized animals. On the other hand, the resemblance of the power of the postdecapitation EEG in both groups might also imply that the animal's consciousness is briefly enhanced immediately after the neck cut. The interpretation might be that the cut is such a powerful arousal stimulus, that even anesthetized animals regain consciousness.

But, EEG activity did not end there. After these 4 seconds, everything was quiet, until about 50 (in previously awake rats), or 80 (in previously anesthetized rats) seconds after decapitation, when a high amplitude slow wave appeared on the EEG (see figure 1). The EEG had more power before this wave then after it. 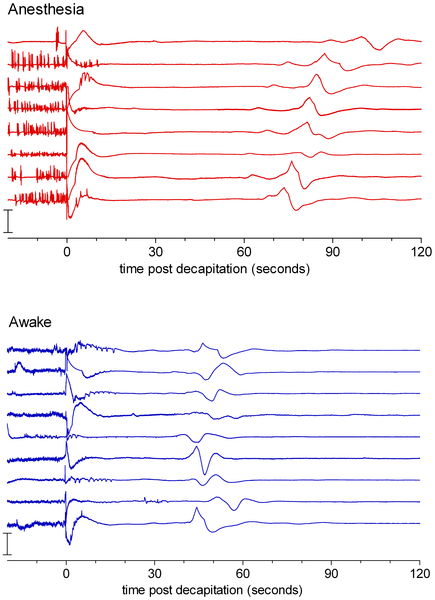 Figure 1: The EEGs of anesthetized and awake rats. In the former, the wave of death appears approximately 80 seconds after decapitation, in the latter around 50 seconds after.

To explain this, the authors speculate that:

…due to lack of energy to maintain this potential, neurons lose their membrane potential at this time. The wave thus might reflect a massive opening of ion channels: a depolarization wave. The still functioning of these ion channels in the period before the wave might be responsible for the observed difference in the pre-wave and post-wave power of the EEG. Hence, it is thought that the wave represents the synchronous death of brain neurons, expressed in a ‘wave of death’.

Overall, the authors conclude that:

…consciousness is likely to vanish within some seconds after decapitation. It is therefore implied that decapitation is a quick and not inhumane method of euthanasia. Interestingly, it seems that it takes nearly one minute for neurons to lose their membrane potentials. In view of this finding, a long EEG monitoring during the process of natural dying and basic research regarding the physiology of brain functioning during this process might give information in the ongoing discussion on the definition of brain death, but it is suggested here that the massive wave which can recorded approximately one minute after decapitation ultimately reflects brain death.

They do mention that:

This conclusion, however, does not imply that decapitation is recommended in all situations. It is an offensive method which has an esthetical disadvantage: performing and observing this technique is displeasing. Moreover, achieving decapitation requires experienced and skilled personnel.

Decapitation might be humane, but so is (in my opinion) putting the animals to sleep, which also produces less of a mess...