After a thorough two-year investigation, researchers at UC San Diego and the University of Oregon have identified over 70 genes that play a role in the repair of neurons after injury, specifically when it comes to the growth of axons. A massive genetic screening of 654 genes suspected to be involved, resulted in the identification of 70 genes that promote axon growth and 6 that inhibit it.

Axon growth is an important factor in recovering from nerve trauma. A spinal cord injury, or a stroke, causes a lot of damage to the axons. The severity of these injuries lies in the inefficiency of axon regeneration in the brain and spinal cord. So, understanding how axons, and the connections between  them, are (inadequately) repaired would certainly help in advancing towards some form of treatment.

To investigate this, the researchers conducted experiments on more than 10,000 tiny nematodes of the species Caenorhabditis elegans. Firstly, mutants forms were made for each of the 654 genes suspected to play a role. Then, the neurons in these minute worms were labeled with green fluorescent protein, and damage was inflicted to a specific neuron, after which the (lack of) recovery could be observed (see figure 1). 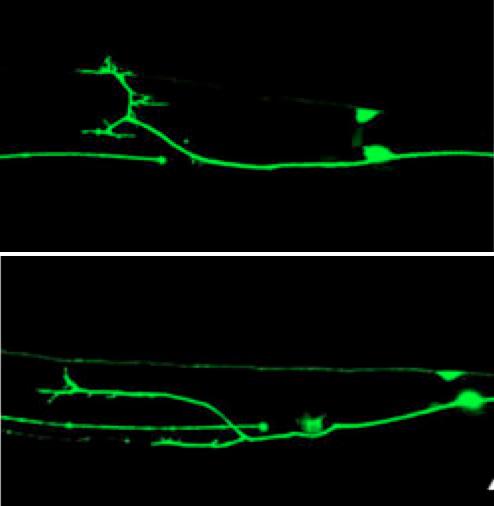 This enabled the researchers to see which genes actually mattered in the process of axon growth. While it is suspected that these genes play similar roles in mammals, the research team is busy setting up experiments on mice to verify this.

In the words of one of the authors:

Worms are clearly different from mammals. But there will be a core of conserved molecules doing the same job.

If this is indeed verified, this provides an indication that at least some of these genes could play a similar role in humans, supplying potential new routes to nerve repair.

Identification of these pathways significantly expands our understanding of the genetic basis of axonal injury responses and repair.