Apparently, the female ancestor of present-day polar bears was a brown bear, living in what presently corresponds to Ireland. An international research team has used mitochondrial DNA (see figure 1) to trace back the polar bears (maternal) ancestry. And it turns out that, 20,000 to 50,000 years ago, they interbred with brown bears.

Figure 1: During fertilization, the sperm cell does not contribute mitochondria to the egg.

Despite the obvious differences in body size, skin and coat color, tooth type, fur structure,and several other physical traits, along with behavioral differences (swimming polar bears versus climbing brown bears), brown and polar bears have been known to interbreed (see figure 2 for hydrib bears). Now, DNA research has shown that the brown bear contributed genetic material to the polar bear’s mitochondrial lineage. Through genetic analysis of 242 polar and brown bear samples, the fixation of the mitochondrial genome (after a hybridization event) was dated as far back as 50,000 to 20,000 years ago. 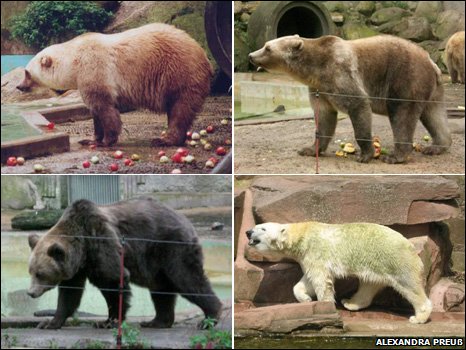 While both bear species tend to live in fairly different habitats, changes in climate can lead to environmental conditions that could favor contact and hybridization between both bear species. If temperatures rise, for example, glacial ice melts and sea levels rise, forcing polar bears to spend more time onshore in their search for food, closer to their brown colored relatives. Vice versa, during a cooling period, brown bears can be forced into a habitat occupied by polar bears, increasing their chances of running into one. Because of these climatologic changes, polar and brown bears have encountered each other several times during several different occasions in the past.

As temperatures seem to be on the rise again, the possibility of polar and brown bears meeting is increasing again as well, which might lead to an increase in hybrid bears.This might have ramifications for conservation efforts, as these hybrids might play an undervalued role in the survival of certain species.

In the hope to learn more about the genetic history of the polar bear, the research team is now focusing on other parts of its genome.