The brain is quite complex (talking about an understatement), with its billions of neurons with many connections between them. These neurons and their connections form an intricate three-dimensional structure which forms the seat for cognition, awareness and much more. Its intricacy, however, also makes mapping it a daunting challenge. Nevertheless, there are some research groups that have put themselves to the task (for example, the Human Brain Project). The latest news comes from the Max Planck Institute for Medical Research, in Heidelberg, Germany, where a research team has developed a new method of approaching this immense task.

With two new computer programs, named RESCOPS and KNOSSOS, the task can be spread over many people, resulting in a faster and more accurate mapping than has been achieved by other methods. The brain, with its axons and dendrites, its neurons and synapses, still holds many mysteries. So, it shouldn’t come as a surprise that scientists are eager to gain a greater understanding of the structure of its circuits (also termed ‘the connectome’) by reconstructing it in a three-dimensional map. To do this, researchers still depend on the human eye, and the sheer number of neurons and connections represent a whole lotta work.

But what if this work could be shared among many people? This is what the research team at the institute must have thought when the developed the two computer programs. By using RESCOPS, the results of several annotators are summarized into an overall picture. Each individual annotator uses KNOSSOS to trace the connections between the neurons (see figure 1).

Figure 1: A) Tracing of neuron fragment, B) Schematic representation of traced neuron.

The process starts by staining the neurons of a section of tissue to make them visible. Then, using three-dimensional electron microscope images, the annotators start at the cell body and trace the dendrites and the axon, marking each branch point. Based on this, the computer generates a 3D image of the section. The KNOSSOS software is 50 times faster than similar programs that have been developed so far. The RESCOPS software, in turn, reduces the errors that may arise through missing branch points as a result of the annotator’s decrease in attentiveness over time by making a summary of the results of several people.

This method is fairly easy, and, as such, can be implemented by non-experts. The error-rate of the best students was not higher than that of experienced neurobiologists. As a test, over  100 neurons of the mouse retina were mapped (see figure 2). 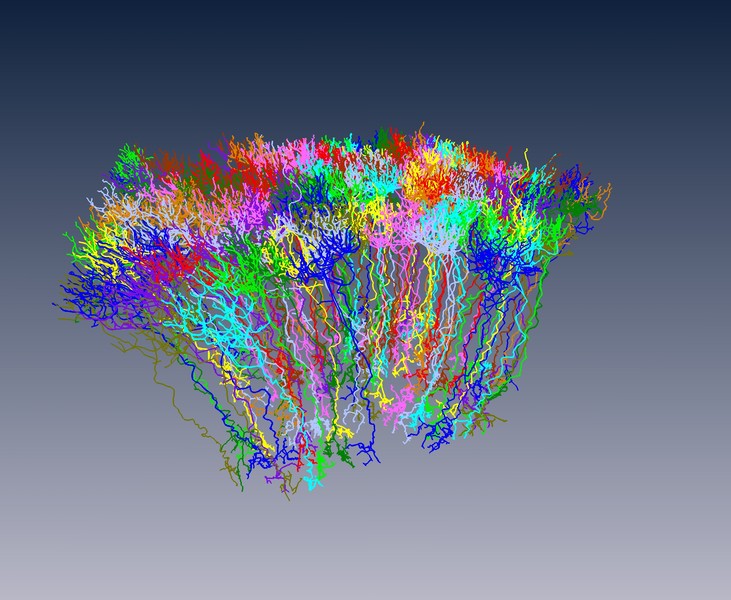 Figure 2: Reconstruction of 114 rod bipolar nerve cells of a mouse retina. The dense bundles are dendites, the sparser processes axons.

The next step is the reconstruction of the mouse cerebral cortex. In the words of one of the authors:

For the first time ever, these new programs could make it possible for us to unravel the complicated neural network of the brain – a task far more complex than decoding the human genome.