Social networks on the internet have grown greatly in the past few years. None more than the near ubiquitous Facebook, with over 800 million active users, half of which log in on any given day. Yet, there is great variability in the size of the online social networks of individual people. Is this correlated with the real-world networks of people? Does this have a neural basis? It are exactly these questions that were investigated in a new study, published in the Proceedings of the Royal Society B.

By collecting MRI scans of 125 healthy volunteers (independently replicating the experiments in a second dataset of 40 people) and having these people fill in a questionnaire, the researchers that authored the study had a look at both aforementioned questions.

Here’s what they found:

Figure 1: The main results replicated in an independent dataset of 40 individuals, illustrating the relationship between the number of Facebook friends and the grey matter density of (a) the left middle temporal gyrus, (b) the right superior temporal sulcus, and (c) the entorhinal cortex. 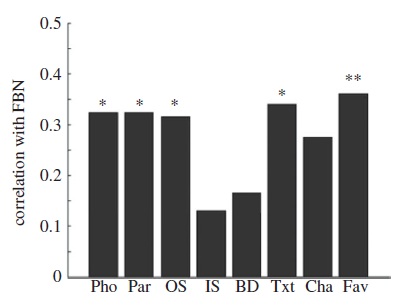 Figure 2: Correlations between the number of Facebook friends and the number of friends in the phonebook (Pho), to be invited to a party (Par), outside school (OS), within school (IS), present at a birthday party (BD), that receive a text message for a celebratory event (Txt), one would meet for a chat (Cha), and one could ask for a favour (Fav).

Now, it is important to note that this study reveals a correlation, not a causal connection. So, at this moment, there is no evidence that using Facebook will increase the size of these brain areas or make you more sociable, as the authors themselves note:

…our study was by design cross-sectional and so cannot determine whether the relationship between brain structure and social network participation arises over time through friendship-dependent plasticity in the brain areas involved; or alternatively whether individuals with a specific brain structure are predisposed to acquire more friends than others. The relative contributions of ‘nature’ and ‘nurture’ therefore remain to be determined.

Taken together, our findings demonstrate that the size of an individual’s online social network is closely linked to focal brain structure implicated in social cognition.