How do new species arise? This question is still being vigorously researched in evolutionary biology. New technologies, such as genomics, provide intriguing new opportunities to investigate the matter, but they also show that some of the previous ideas were not as satisfactory as once thought. So, where does the research go from here?

The members of the Marie Curie SPECIATION Network have recently published a list of what they perceive to be key questions on the topic of speciation, as a guide for future studies. These questions were divided into three main research areas:

(i) elucidating the component mechanisms that drive the build-up of reproductive isolation; (ii) understanding the genetics and genomics of speciation; and (iii) connecting speciation processes more closely to research on patterns of biodiversity.

All in all, thirteen question were identified:

In the first research area, the origin and build-up of reproductive isolation, six questions are asked:

For a schedule of these question, see figure 1. 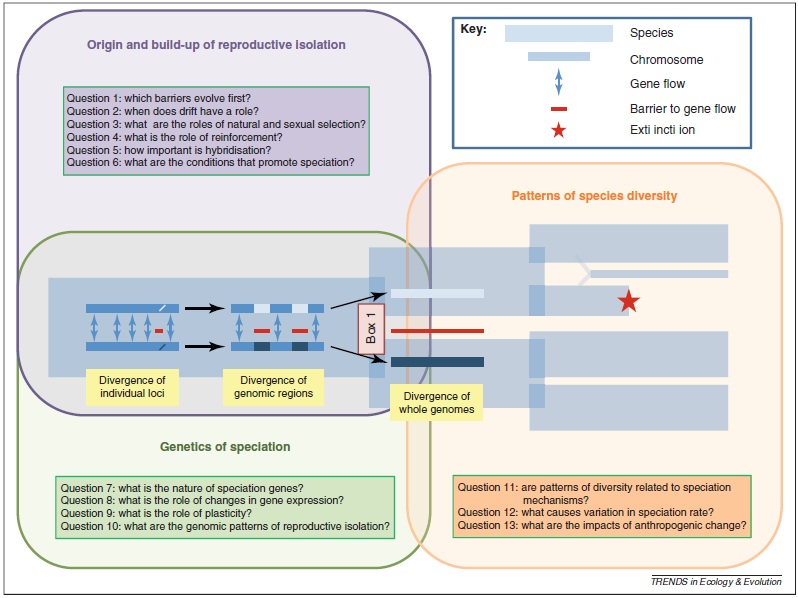 Figure 1: Overview of the questions.

Clearly, there are many fascinating questions about speciation that we have not been able to include in this overview. Some of them appeared in our initial list and have been excluded only for reasons of space; others have no doubt been missed because we cannot represent all possible approaches to the problem. However, we also feel that some traditional foci of speciation research have reached a stage where they can now be left behind. Arguably, every speciation event is unique. The common ground cannot be found by trying to force these events into categories, but it might be reached by focusing on the evolutionary forces, ecological circumstances and genetic mechanisms that they share. We are better placed now than ever before to move from a narrow perspective of speciation biology based on a handful of organisms and really start taking advantage of the endless forms of developing species. The biology of speciation can now enter a new era.

Complementing the article, there is a discussion page about it on the website of Trends in Ecology and Evolution.