Large amounts of research and money have been invested in the development of transgenic, or GM (genetically modified) crops. These crops are genetically engineered to withstand drought, excessive rain or other weather conditions, or to improve their yield or increase their rate of development, or to express certain toxins that would limit the amount of insects feeding on them.

While transgenic crops might potentially be a means to increase food production, they have been, and remain to be, quite controversial. There are many reasons why people oppose them, but one of them is that insect resistance is unlikely to last. Now, a study seems to provide some evidence for the occurrence of field-evolved resistance to toxins produced by transgenic maize in the western corn rootworm (or Diabrotica vrigifera virgifera, don’t let the common name fool you, it is, in fact, an insect) (see figure 1). 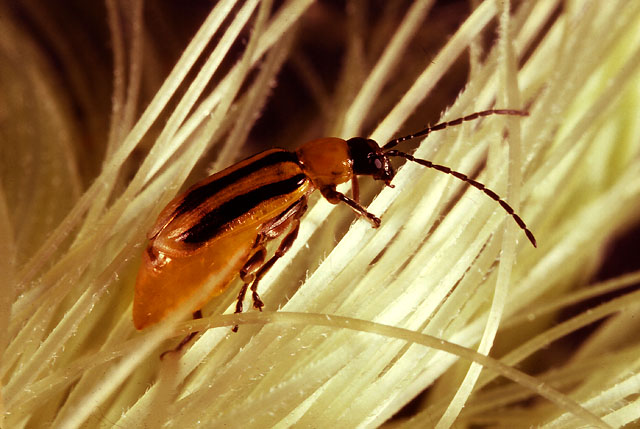 Bt maize has been engineered to produce toxins derived from the bacterium Bacillus thuringiensis (hence Bt) (see figure 2). Bt crops are planted on millions of hectares each year and strongly reduce the need for conventional insecticides, as well as the occurrence of pests. Resistance to the toxins, however, could significantly impact these benefits. More specifically, fields which have been used to grow Cry3Bb1 maize (a type of Bt maize) for several consecutive growing seasons, showed more severe feeding injury from rootworms, indicating higher rootworm survival.

Figure 2: The makings of Bt maize

Rootworms from several fields were collected, and their larvae, reared in the laboratory, were introduced to Bt maize. Turns out that the larvae whose parents came from fields with a longer history of growing Cry3Bb1 maize exhibited a higher survival. In fact, the survival correlated nicely with the number of consecutive growing seasons of this type of maize (see figure 3). 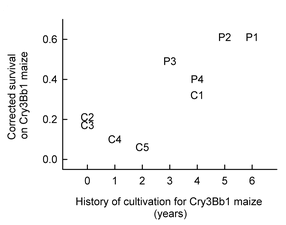 Figure 3: Correlation between the number of years that Cry3Bb1 maize has been grown on a field and rootworm survival (C: control field, P: problem field).

To date, the widespread planting of Bt crops has resulted in pest resistance for only a small subset of all pest populations managed by this technology. However, these recent cases suggest a need to develop more integrated management solutions for pests targeted by Bt crops. A common pattern observed among problem fields in this study was the consecutive planting of the same type of Bt maize over several seasons. Even with resistance management plans in place, sole reliance on Bt crops for management of agriculture pests will likely hasten the evolution of resistance in some cases, thereby diminishing the benefits that these crops provide.

Does this mean the transgenic crops are without value? Of course not. Resistance to weather patterns, or improving yield will not be challenged in this way  (but perhaps in other ways?). And even transgenic crops engineered to produce insect toxins needn’t be labeled as ‘failed’. The key is not to give the insects a chance to develop resistance, for example, as the authors propose, by alternating different transgenic breeds, or alternating transgenic and 'regular' crops.

As always, further research is required to understand exactly how this resistance evolves, and what the most appropriate means are for preventing this.