In Big History there are many transitions as complexity seems to grow in the natural ecosystems and social historical development. There are still many questions concerning why the transitions happened at all.  For example, in going from hunter gatherer to an agricultural lifestyle, the amount of work required seemed to radically increase, after much of the land had been settled in small agricultural communities why did large cities evolve with little connection to agriculture except to consume, and why did the scientific revolution and industrial revolution predominantly first occur in Western Europe even though many of the inventions had been imported from elsewhere, and the current question- can a civilization, that is so far from equilibrium in both unsustainable fossil energy consumption and levels of development, find a path to productive sustainability?

In social evolution, it seems like the motivations for transitions are mostly internally generated- one period solves a problem of the previous period, grows, and is prosperous until some limit is reached causing new problems.  Searches begin for alternative ways of organizing through reform and new understanding, leading to the end of the generation and the beginning of the next.  Some of these problems manifest themselves in capacities for human population under a given lifestyle.  Control and limits of energy and corresponding pollution are often major issues.  For example, many energy sources can be very dangerous without proper control- early humans figured out how to control natural fires which could easily destroy their environment, villages enabled greater energy production of farms but generated larger environmental issues in human waste disposal and diseases, current energy sources generate large amounts of pollution and resources requirements such as CO2 and nuclear waste.

The method used here is to demonstrate possible interpretation of events during these periods to indicate logistic learning, i.e., learning in each period tended to be slow at first, fast during the middle of the period and then slows as the transition to the next period begins.  This will determine an empirical midpoint and learning rate for the period.  Next qualitative description of the dynamics of transitions between the periods will be modeled in an attempt to understand, at a phenomenological level, some of the similarities and differences in these transitions.  For example, determination of sensitive parameters of the transition rate, reversibility, and stochastic nature.

What caused the transition from a relatively leisurely hunter-gatherer lifestyle to the more work intensive agricultural lifestyle? It might not be exactly clear, but we know that all hunter-gatherer societies did not take the path to agriculture even when it was known as an option.  Such Native American tribes were observed in the Northwest U.S. where salmon was quite abundant.

Perhaps the lifestyle was nice when the conditions were good but over time as the population density of hunter gathers slowly increased, pressure was placed on land resources to return higher yields.  With the greater stress on the natural resources,  environmental conditions such as drought reduced the capacity of the land to support the hunter-gatherers. Supplemental intermediate strategies such as slash-and-burn and swidden agricultural were developed. Agricultural land can support many more people than a hunter-gather society although it requires more work  such as clearing, plowing, planting, nurturing, harvesting, selecting, and storing. The agricultural process also tended to encourage a more stationary existence since the land required uch worked to be cleared and prepared and also that food and tools needed to be stored and protected.

A hunter-gatherer society could maintain small population growth through techniques such as delayed weaning.  In agricultural communities, however, larger families were desired since some jobs were menial and could be performed by younger children, thus reducing the work of the parents.  The pressure from larger families further increased the population pressure resulting in a positive feedback loop.  Thus the society coalesces into agricultural communities similar to a phase transition from a gas to liquid under increased pressure. This dynamic forms the basis of this logistic transition model to agriculture. 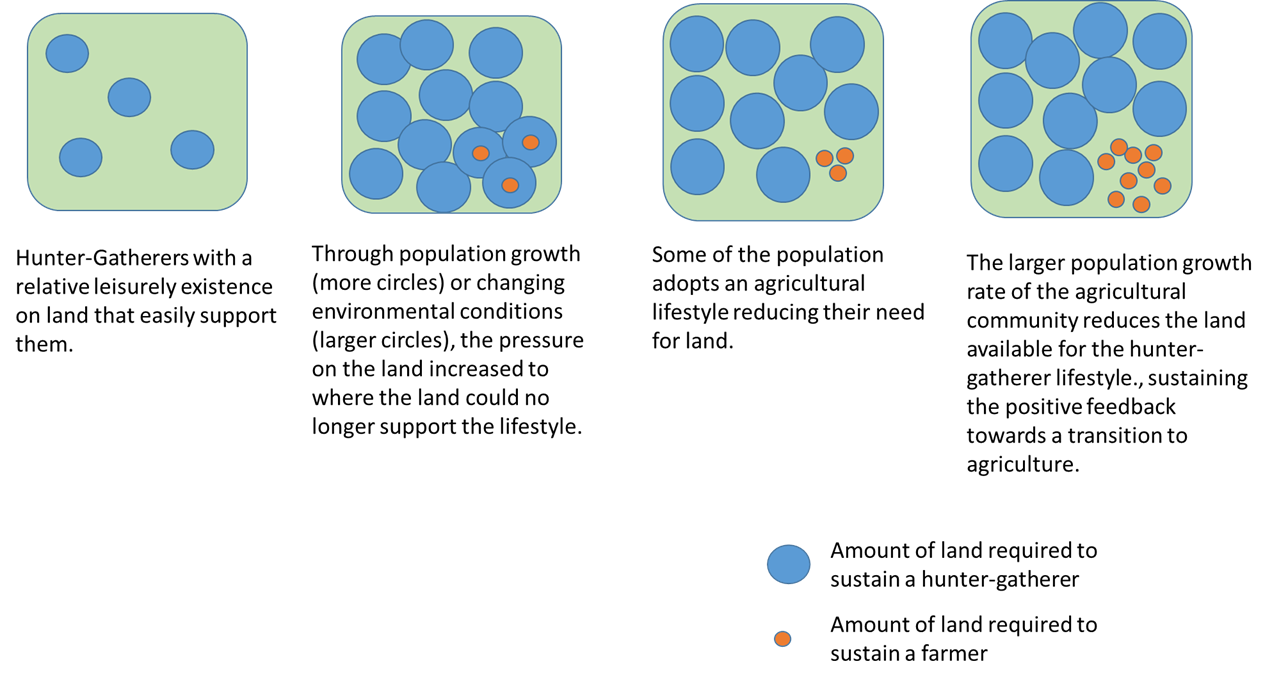 The system dynamic model has two population  groups - hunter-gatherers and farmers with 99% of the population starting as hunter-gatherers.  Both compete for the land resources, although the farmers require a tenth of the land per person to support their lifestyle.  If the pressure is low, the easier work of the hunter-gatherer lifestyle gains converts, although with larger populations (or events that cause loss of land due to environmental or natural causes) a few may switch at least temporarily to an agricultural lifestyle.  However, the agricultural lifestyle which is able to feed more and use the children at an earlier age, tends to propagate the lifestyle by increasing the pressure (the farmer growth rate is assumed to be 3 times greater.  Therefore, the transition continues towards more farmers with the important processes which determine the transition rate being the land pressure and the relative growth rates.

Evidence of intermediate events can be used to estimate the duration and midpoint of the transition.  A list of important events in during various development phases might be constructed and analyzed corresponding to logistic (or learning) pattern.   For example Diamond discusses some important events in the transition from hunter-gatherer to agriculture which can be treated with equal weight to form a logistic curve.  What one expects is a slow rate of discoveries early in the process, followed by a quicker discovery rate, with the quickest rate at the inflection point in the middle, then followed by a another slower phases of discoveries near the end of the transition.  The beginning of the transition was about 15,000 years ago with the exploration of sedentary hunters. The inflection point was about 9000 years ago (7,000 BCE), with forms of plant domestication. The last major event putting the transition over 90% was the introduction of metal tools at about 5,000 years ago (3,000 BCE). The duration of the transition from 10% to 90% was about 9,000 years. 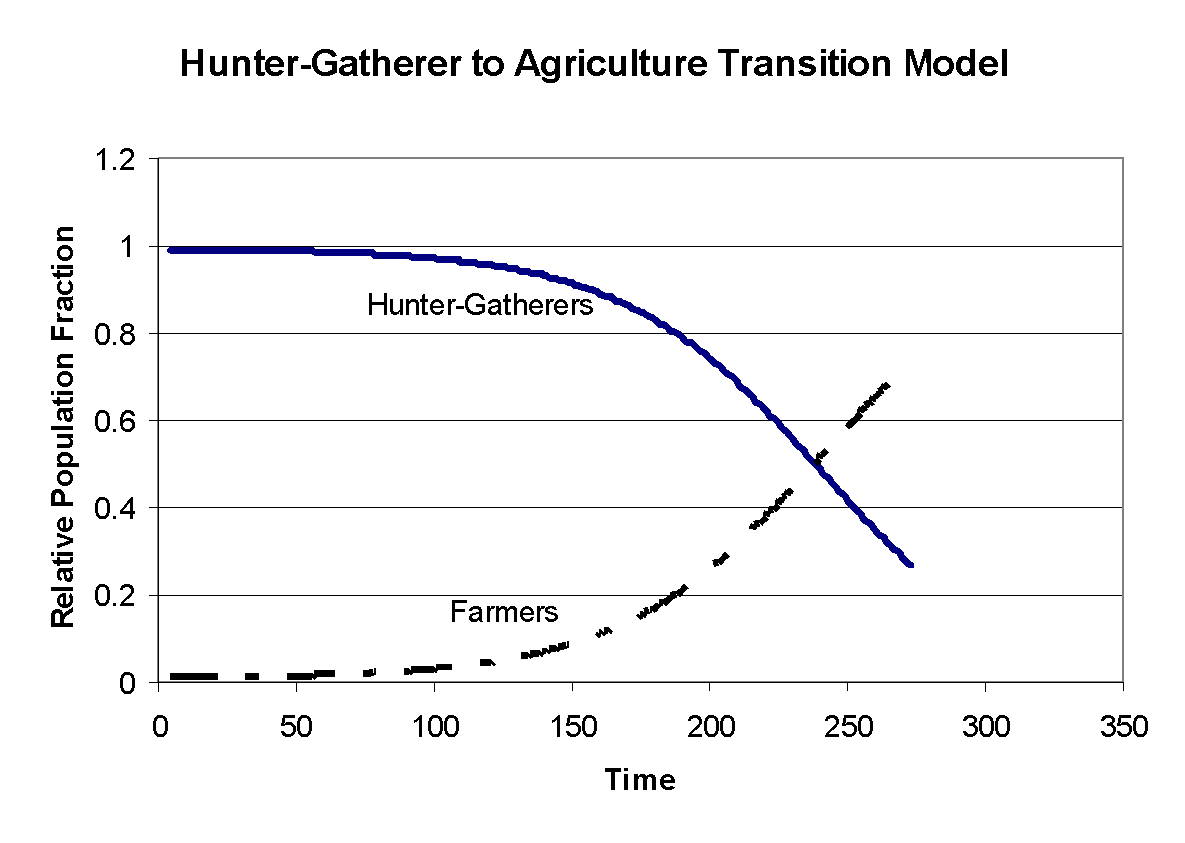 So can other models and analogies be made to other important historical transitions?